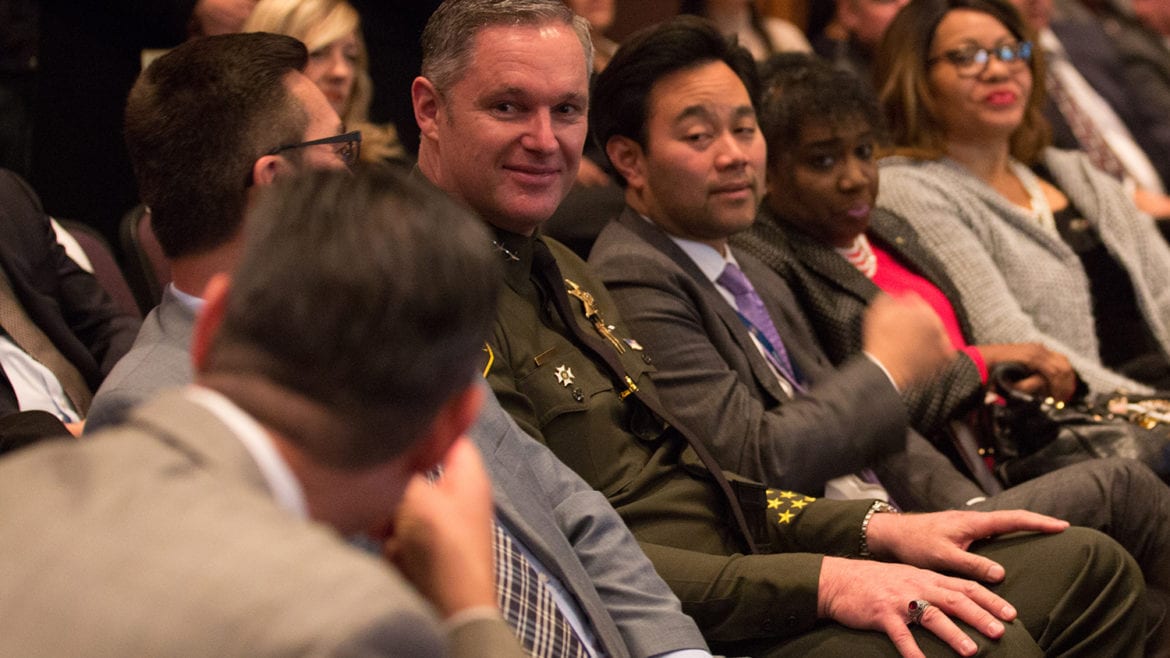 Orange County Sheriff Don Barnes (center) looks on as District Attorney Todd Spitzer points at him during a January 2019 Orange County Board of Supervisors meeting.

Orange County District Attorney Todd Spitzer and Sheriff Don Barnes continued to take aim at each other this week, in the wake of an evidence-booking scandal that has already triggered four fired and seven disciplined deputy sheriffs along with four ongoing probes inside the Sheriff’s department.

Last month, it was revealed that the Sheriff’s officials face huge challenges booking evidence according to policy, with deputies holding on to evidence like cash, drugs and guns for longer than is allowed. Logging photos and videos is presenting a huge problem for the agency, according to the internal audits, which were largely kept secret until last month when Assistant Public Defender Scott Sanders referred to them in legal motions and the Orange County Register published an expose about the secret audits.

On Wednesday, Spitzer fired off a terse letter to Barnes reiterating, “I knew nothing of this matter until November 15, 2019 when I was informed about it from a local newspaper reporter (Tony Saavedra of the Orange County Register).

Spitzer also directly called out the Sheriff’s Department over public statements that the District Attorney was in the loop on the secret audits.

“My subsequent review of your submissions revealed that your department did not in any way properly disclose that the Sheriff’s Department was engaged in a systematic department-wide review of evidence related booking issues.

Given these facts, it is entirely inappropriate for your staff to publicly assert that my office had knowledge of the existence of a department-wide audit when we clearly did not,” Spitzer wrote.

Spitzer told Barnes that he’s assigning two supervising prosecutors to coordinate with the Sheriff’s Department to dive into the audits to see what next steps need to be taken in cases where evidence may have been improperly booked.

Barnes, meanwhile, shot off a late press release following Spitzer’s letter on late Wednesday that doubled down on his contention that the department did disclose the situation to the District Attorney and others in the legal community.

“Fifteen internal criminal investigations, which were initiated and investigated by the Sheriff’s Department, were conducted and submitted to the Orange County District Attorney’s Office as recent as July 2019. No criminal charges were filed by the District Attorney,” Barnes wrote in his late Wednesday release.

“In criminal cases that were adjudicated before evidence was booked or without evidence being booked, the OCDA issued letters to the attorneys of record. To date, we are aware of more than 50 letters sent to either the public defender, the alternate defender, or the defendant when they represented themselves.

Following the refusal of criminal charges against the deputies who violated policy, the Department conducted internal affairs investigations into the actions of the deputies involved. To date, four deputies have been terminated, seven have been issued discipline, and four investigations are ongoing,” Barnes wrote.

Spitzer sees it very differently, writing that Barnes’ actions didn’t match up to someone looking for accountability.

“To insert a single line in your submissions to the effect “as a result of an audit” did not in any way address the department-wide review in which your Department was actually engaged,” Spitzer wrote Barnes.

“There was no effort by your Department to put these cases in context or highlight that these were anything other than an audit of individual deputy records. As a former County Supervisor, I am very familiar with standards associated with a comprehensive audit in terms of investigation, reporting and recommendations and findings, none of which existed here.

Having nearly completed my first year in office, I can unequivocally state that such a failure to disclose to my prosecutors the true extent of your investigation and analysis does not sit well with me.”

Spitzer noted in his letter to Barnes that he was in Washington, D.C. meeting with the department of Justice about the “ongoing investigation into our offices as a result of your department’s failure to properly disclose information to my office,” referring to the ongoing and unrelated jail informant scandal, and was adamant that he expects total disclosure.

“I will have no part in further failures to disclose information to my prosecutors by any law enforcement agency which brings a criminal case to my office for a filing consideration,” Spitzer wrote.

“Our Department alone identified this issue, conducted two internal audits, and held accountable individuals who violated Department policy, including submission to the District Attorney for their consideration to prosecute the individuals involved,” replied Barnes in his late Wednesday release. “This is an issue of policy that we identified, we addressed, affected parties were notified, and we have remedied with safeguards to ensure this does not happen in the future.

Spitzer in turn, noted that just because the DA didn’t file criminal charges didn’t mean there wasn’t concern or a need for more information on such a systemic issue.

“A decision by my office not to file criminal charges does not equate to my office condoning the behavior in question,” Spitzer wrote. “It would, however, be unethical and a clear misuse of the criminal justice system to file charges as a result of public pressure or to right a wrong that otherwise would go unpunished.

Although charges were not filed against the 17 deputies due to insufficient evidence that a crime was committed, my office immediately instituted a series of steps to ensure that our legal obligations were met, including immediately notifying defense attorneys of potential evidence issues as well as reviewing those 17 deputies for potential Brady issues.

It was not until November 18, 2019 that I was briefed by members of your command staff on the existence of two major audits, and that briefing only took place after I was contacted by a member of the media regarding an audit I knew nothing about, “ Spitzer wrote.

According to the press release put out late Wednesday by Barnes, in 2016, the Sheriff’s Department became aware of one case where evidence was booked outside of Department policy.

The Department conducted an internal criminal investigation on the deputy, and submitted reports for filing consideration to the OCDA in August 2017.

“At that point, there was no reason to believe it was anything other than an isolated incident by a single deputy,” the Department release said.

“In January 2018, the Department was made aware of a second instance where evidence was booked outside of Department policy. Again, an immediate criminal investigation was conducted on the deputy and reports for criminal filing consideration were submitted to the OCDA,” read the Wednesday statement.

The statement noted that, “after the second instance, the Department went well beyond any legal obligation and immediately launched an initial audit to examine if there were additional individuals booking evidence outside of Department policy. The initial audit examined two years, February 2016 to February 2018, consisting of more than 98,000 reports, more than 27,000 evidence bookings, and more than 1,500 deputies. The audits determined there were systemic problems with evidence being booked outside policy, which states evidence must be booked prior to the end of the deputy’s shift.”

Barnes’ release stresses the point that “The majority of the evidence booked outside of policy was digital evidence, consisting of items such as photographs, surveillance video, and/or audio recordings.”

The Department has conducted further review of the findings from the secondary audit. The secondary audit incorrectly identified items as “missing” that had in fact been booked into and remained in evidence the whole time. Some items were booked into evidence under another report number, some evidence was booked by Crime Lab staff under a Crime Lab report number, and some was located by conducting a physical search in the property and evidence warehouse. The Department is continuing to conduct further review of the remaining items. The majority of the remaining items are digital evidence such as photographs or audio recordings, and one is a debit card. Of the remaining items, none of the cases associated were filed for criminal charges by the OCDA.”

Barnes’ release also downplayed the severity of the scandal.

“In only one case have we received a request for evidence that we have been unable to produce,” Barnes release stated. “That instance prompted our immediate investigation that has since resulted in the termination of the deputy involved. Additionally both the District Attorney and defenses’ counsel through the OCDA were notified. To date, there have been no additional instances where evidence has been requested for a criminal case that we have not been able to produce.”

Finally, in his statement Barnes took aim at the Public Defender’s office for how they have characterized the audits in legal motions in defendants’ cases.

“The Public Defender’s office has recklessly attempted to paint a picture that is inaccurate and misleading. Neither of these audits, nor any factual circumstances, have indicated or implied that there are ‘thousands’ of cases affected, that there was ‘evidence tampering’ or that ‘hundreds of deputies lied.’ Any baseless accusation to the contrary is a thinly-veiled attempt to discredit law enforcement and is their blatant attempt to allow people accused of crimes to go free and not be held accountable for their actions.”

The Sheriff’s Department is currently refusing a Voice of OC Public Records Act request to release copies of the evidence-booking audits, asking for a two-week extension to consider the request.