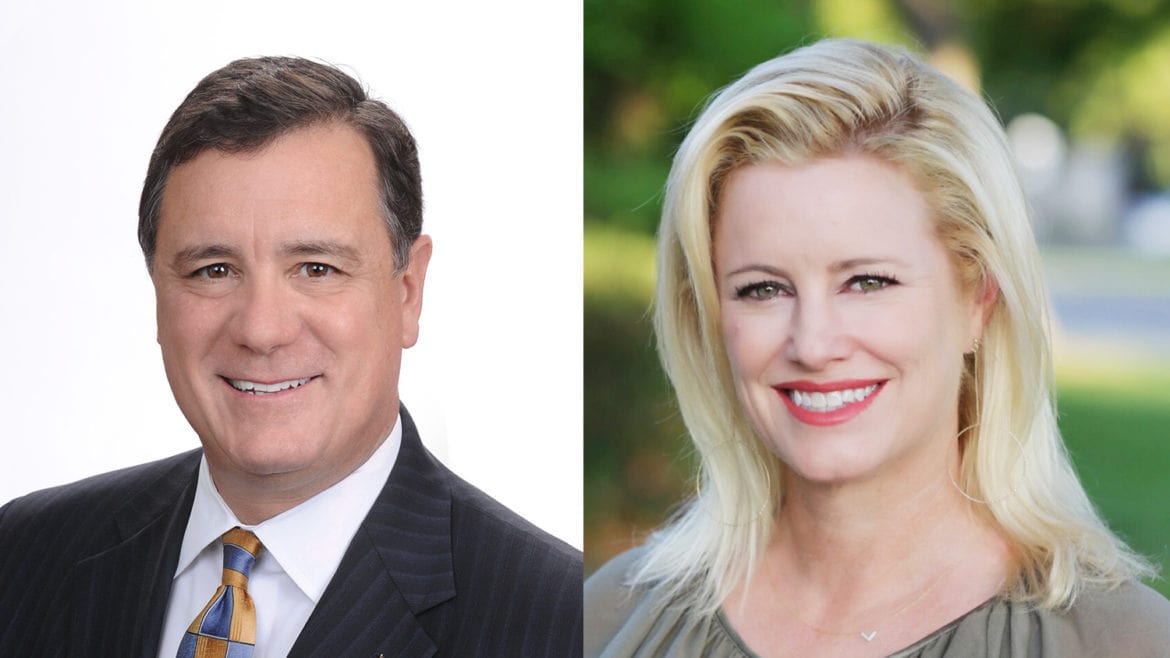 Orange County Republican Supervisor Don Wagner and his Democrat opponent, attorney and OC Fair Board member Ashleigh Aitken, are both facing off against each other in a high stakes, winner-take-all primary campaign next Tuesday that will impact the future of county representation for residents of Irvine, Tustin, Orange, Yorba Linda, part of Anaheim and Villa Park.

With issues like homelessness, development and open space drawing intense concern from many residents of the 3rd District, Wagner and Aitken’s race has drawn hundreds of thousands of campaign dollars.

Wagner, an attorney and former Irvine mayor who won his supervisor seat one year ago, says he’s made significant progress on issues like homelessness, sober living home regulations, and fire prevention – and is asking voters to give him the opportunity to continue serving.

Aitken, a former federal prosecutor and current member of the Orange County Fairgrounds board, says a new direction is needed because the county hasn’t been proactive in creating housing needed to get homeless people off the streets. Her father is Voice of OC’s board chairman, Wylie Aitken.

The stakes for the 3rd District race are high. With voting already underway, the March 3 primary election comes as Republicans and Democrats battle over who have a majority on the county Board of Supervisors.

Aitken is taking issue with an independent mail campaign supporting Wagner that has accused her of supporting light sentences for pedophiles. She has sent the campaign a cease and desist letter threatening legal action, and is calling on Wagner to denounce it, while Wagner says he had nothing to do with the mail campaign and that state law prohibits him from asking them to stop.

Republicans currently have a 4-to-1 majority, and another Republican on the board – Andrew Do – is facing re-election this year against Democrats in what’s considered a highly competitive seat.

Unlike Do’s 1st District race, the contest between Wagner and Aitken will be decided next week. For county supervisor seats, there is no runoff if a candidate gets more than 50 percent of the vote in the primary election.

The biggest spending in the race has been more than $400,000 from the OC sheriff’s deputies’ union on ads supporting Wagner – far more than any other group or individual.

Aitken’s largest financial backing comes from individual donors ($207,000), labor unions, and $30,000 in ad services from consultant John Shallman that disclosures list as being donated by Shallman to an independent expenditure committee that advocated for Aitken.

In interviews Wednesday, both candidates said the top issue in their campaigns is homelessness – but they had very different views of how county supervisors have been doing.

“I’ve been tackling it for a while now,” Wagner said of homelessness, pointing to his time as mayor of Irvine and saying the numbers of homeless people in the city went down during that period.

The goal now, he said, is to “make sure that we have the additional housing to absorb people” coming out of shelters, and to continue to ensure they get mental health care and care for substance abuse problems.

Aitken agrees that housing is needed, but says Wagner and other supervisors have failed to move fast enough on housing, and that they’ve been too focused on outdated shelter models.

“It’s frustrating to see – No. 1, one a stagnant county that for decades has ignored the issue, and then only when it’s forced by a federal [judge],” pursues a shelter approach “that doesn’t work,” said Aitken.

“We have a lot of tired leadership” that either doesn’t have a “passion” for the issue, or “doesn’t care,” she added. “We cannot keep recycling these 30 year-old ideas that don’t work – which is, ‘lets build a large warehouse’ ” to shelter people.

Wagner shot back, saying Aitken lacks experience governing, and that most of the 3rd District is “in fact is making substantial progress” in caring for homeless people, pointing to a settlement agreement that requires shelter be offered to homeless people before anti-camping laws are enforced.

Aitken, meanwhile, says she’s been dealing with homelessness since 2013 when she was president of the Orange County Bar Association, and points to her position as a board member of WISE Place, one of Orange County’s largest homeless shelters for women.

In October, Wagner and the other county supervisors voted for $151 million in raises for sheriff’s deputies without public discussion, weeks after they transferred $24 million from public health and other priorities to cover sheriff budget shortfalls.

Aitken said the supervisors have been doing a terrible job of managing the budget.

“I think there’s been an absolute failure of the Board of Supervisors to supervise the budget at all,” Aitken said.

“My opponent can rely on special interest and developer money,” she added, pointing to the sheriff’s deputies union being his biggest financial supporter.

Wagner called that “nonsense,” pointing to his public pushback against Sheriff Don Barnes over widespread problems with deputies booking evidence late – or not at all.

“My record, to anybody who is looking at it fairly and objectively, says those charges from [Aitken] are nonsense,” Wagner said. “I have taken a stand against the Sheriff’s Department where necessary and appropriate.”

Wagner said he’s asking the voters to help him continue his progress, including his re-opening Irvine Lake, holding town halls to educate the public on fire evacuation, and passing new regulations on sober living homes.

“I’ve had a little less than a year to do this job, and we have seen some substantial progress on a number of fronts. I want the opportunity to continue that progress,” Wagner said.

Aitken said she would bring change, and pointed to what she said is a campaign funded largely by residents as opposed to special interests.

“I’m very proud that the money that we have raised has been from individual donors. It’s people that are in the community, Orange County residents that want to see change on the Board of Supervisors,” Aitken said.