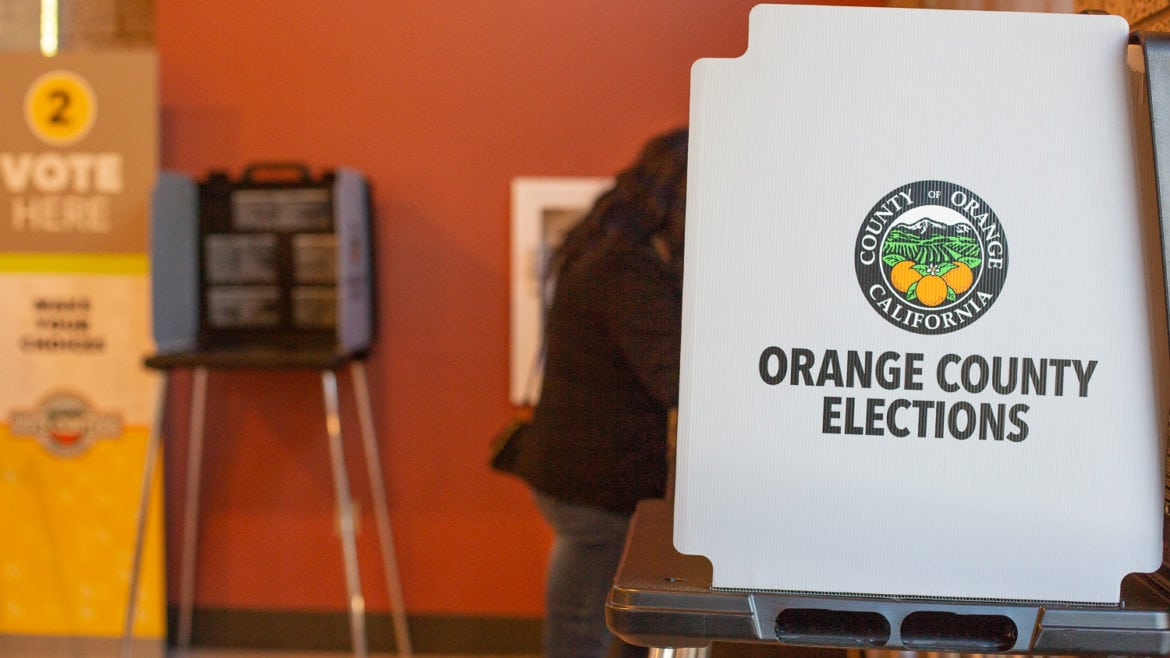 A voter fills out a ballot at the Las Lomas Community Park and Community Center in Irvine.

This story has been updated with the latest election results.

Republicans had a lead in one of the four contested Congressional districts in Orange County, after the latest ballot count just after midnight Wednesday morning.

The top two vote-getters in each race will advance to the November general election. Ballots will continue to be counted in the coming days.

Democrat Rep. Harley Rouda (D-Laguna Beach) took the lead in his re-election against Republican OC Supervisor Michelle Steel, with a roughly 9,000-vote lead in the 48th Congressional District. Rouda started the night down by roughly 2,000 votes.

Rep. Katie Porter (D-Irvine) had roughly 62,500 votes in the 45th District race, ahead of the next highest voter-getter so far, Mission Viejo Councilman Greg Raths, who trailed at nearly 24,600, followed by Laguna Hills Councilman Don Sedgwick was in third place at just over 18,000 votes.

Congressman Mike Levin (D-San Juan Capistrano) will face San Juan Capistrano Mayor Brian Maryott in November, because they’re the only two who qualified for the ballot in the 49th Congressional District. The two were nearly tied when results first came in 8 p.m. Tuesday, and Levin later took the lead by just over 4,000 votes.

Republicans are looking to recapture the four Congressional seats they lost in the 2018 election, when national Democrats targeted the districts because Hillary Clinton beat Donald Trump in the districts in the 2016 election.

The 39th District consists of the most northern portion of Orange County from parts of Buena Park, Placentia and Anaheim Hills and contains all of Yorba Linda, Brea, La Habra and Fullerton, while reaching north to parts of neighboring Los Angeles and San Bernardino counties.

Voter registration is almost evenly split with Democrats at 35 percent, and Republicans with nearly 33 percent of the district’s 387,000 registered voters. No Party Preference voters make up over a quarter of voters.

Voter registration in the 45 District still favors Republicans at 35.5 percent of the 435,000 registered voters. Democrats make up 32 percent and no party preference voters are 27 percent of the district.