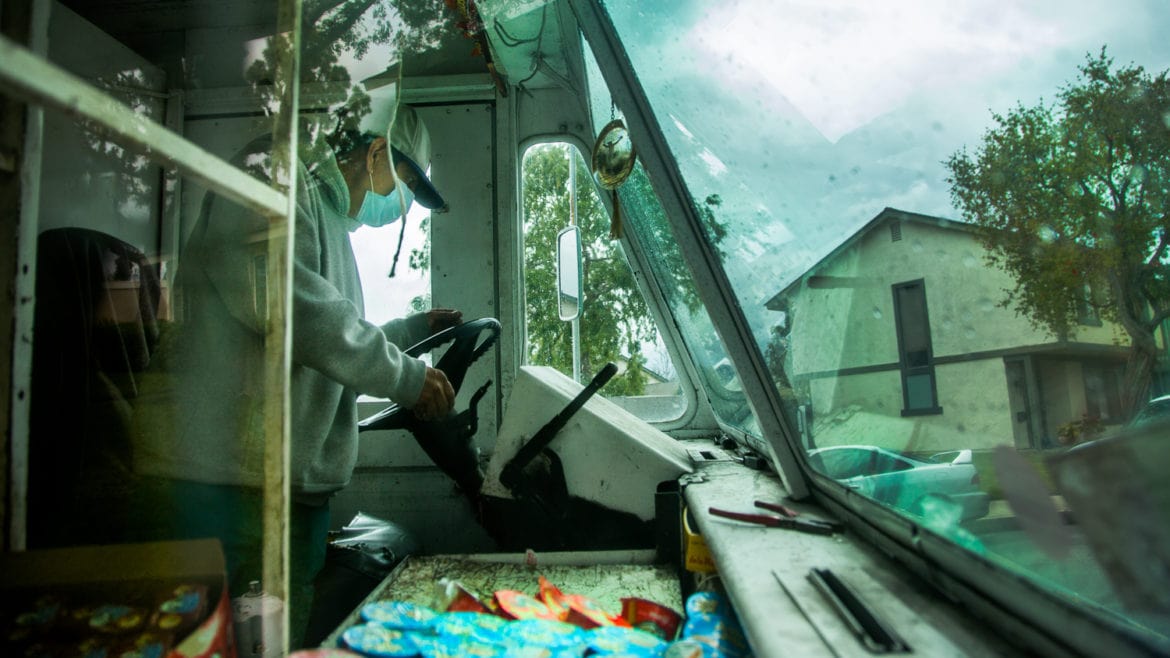 An enterprising and award-winning photojournalist in Orange County and beyond. Leopo, as Voice of OC’s Director of Photography, has captured a wide array of photographs visually documenting the news and soul of Orange County local government and community. Her work has also appeared in Vice, KCET, Ed Source, The California Endowment and OC Weekly.

Artesia Pilar community is a neighborhood like many others in Santa Ana filled with the echoes of cumbias, banda, paletero bells, and the footsteps and voices of children running around in apartment complexes.

Since the statewide lockdown, these sounds have fallen silent.

However, there still is one familiar sound that still plays: the horn of the neighborhood mobile grocery truck, “ El Arbolito Produce.”

On a recent rainy, early afternoon I met Pedro, a 58-year-old Santa Ana resident and owner of a mobile grocery truck. All nonessential businesses have been closed for over a month in Orange County, but Pedro, an essential business, has continued to operate.

His schedule hasn’t changed since the lockdown. Every day, seven days a week, he still visits 30 neighborhoods in Santa Ana.

“Todavía tengo que trabajar,” he says. (“I still have to work.”)

He sells fresh produce that he buys from Los Angeles— an hour away. His clientele is multi-generational: youth skipping to buy candy and hot chips, husbands running out to buy a pack of tortillas during dinner time, or señoras carefully picking tomatillos for their fresh salsa of the day. Many of his customers know him by name and some even have his personal phone number to place custom orders. Since social distancing rules became implemented he now has 20 clients that solely depend on him for groceries. He visits their neighborhoods everyday and is fully stocked with the essentials and fresh produce. “ They are all different ages, but they wait for me to bring them groceries.”

During our time together, I followed along with my car. We rode through neighborhoods coupled with narrow streets and crowded parking. When cars started to form a line behind him, particularly on 10th Street, no one stopped their car to honk at his parked or slow moving 20-year old truck—a sign of acceptance from the communities he visits.

At the end of the initial call when Pedro and I were strategizing our meeting and how we could keep a safe distance I told him that his work was important and that he made accessing groceries so easy for many residents, especially during these times.

“You think my work is important?” he said.

After a sigh, he said simply, “No pues, muchas gracias.”

As we hung up I could hear him start to warm up his truck. 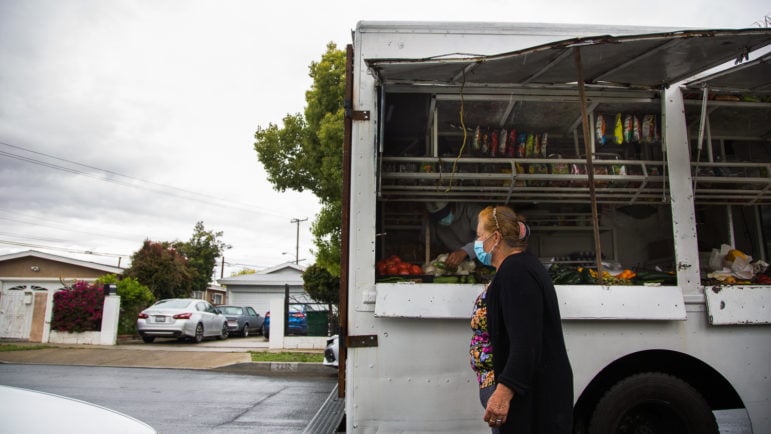 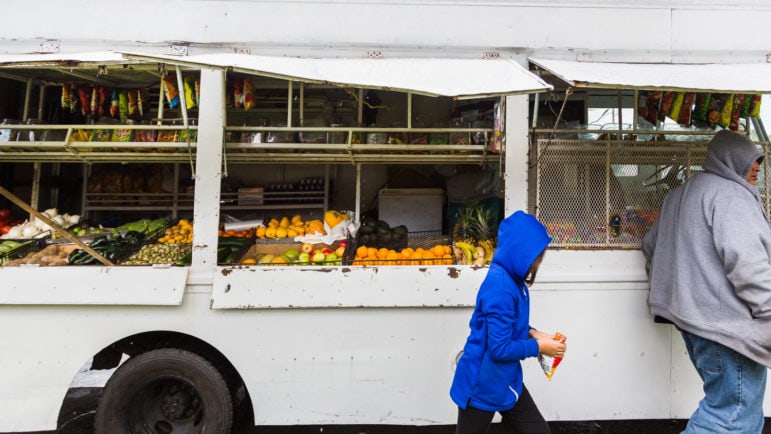 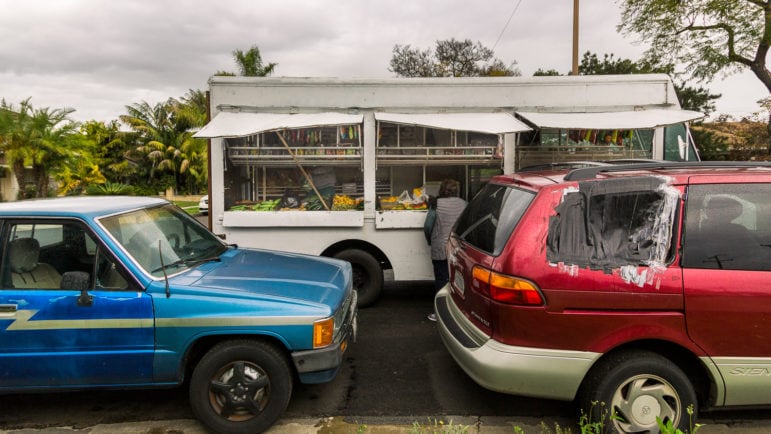 Pedro makes one of his stops in Artesia Pilar neighborhood in Santa Ana. 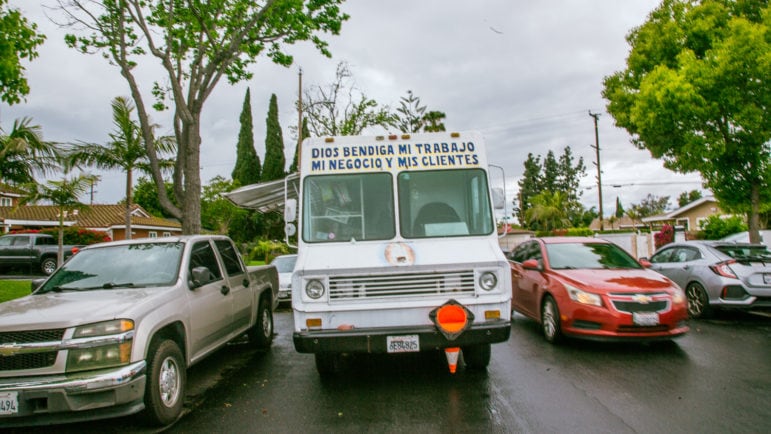 A car drives around the produce truck.

When Pedro arrives at each stop he walks over to the passenger side to open up the panels covering the produce during his ride. 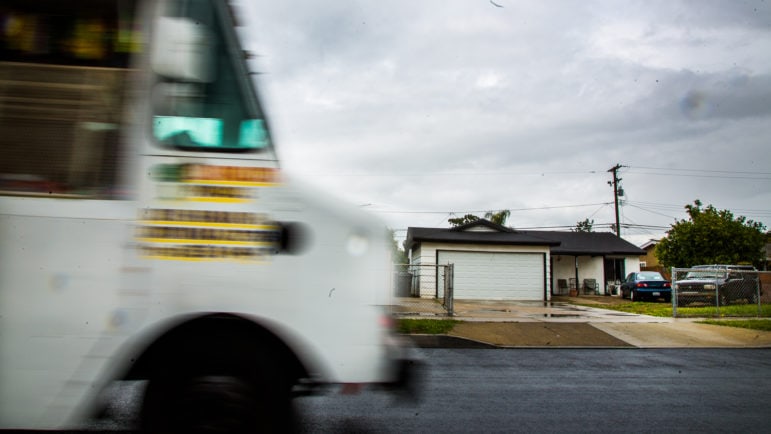 El Arbolito produce truck passes through Hawley street in Santa Ana. Pedro purchased his truck 20 years ago. He started selling strawberries and oranges on the side of the road and eventually made enough money to buy his truck. 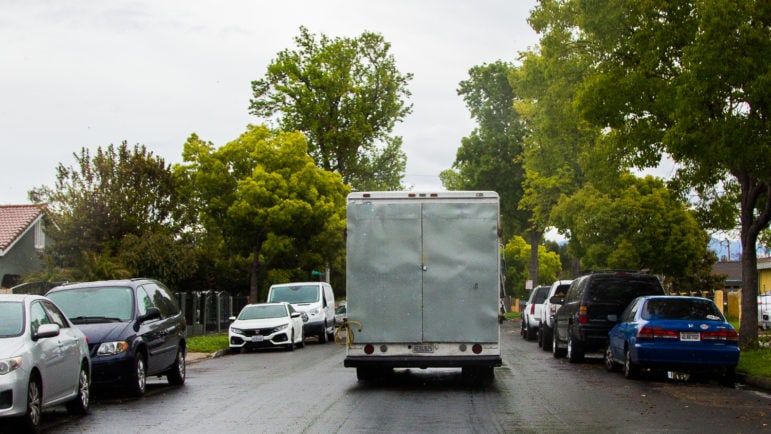 10th street in Santa Ana on April 20, 2020. On this street he made two stops. Each stop he parked for six minutes, yielding five customers.