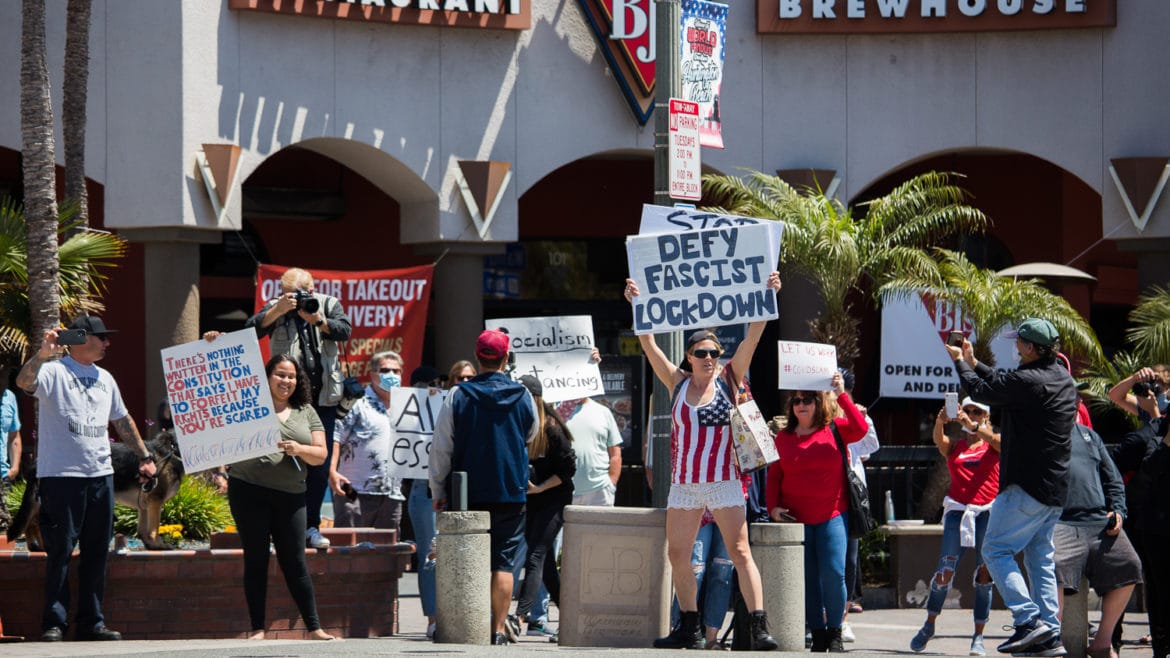 With an assortment of Orange County residents engaging in active protests of Gov. Gavin Newsom’s stay home orders this past week, questions are beginning to arise about how local law enforcement will handle enforcement of the orders as well as defiance.

OC Supervisor Don Wagner said he and his colleagues have been supporting a light-handed approach so far to the stay home order enforcement.

“We’ve been asking or at least I’ve been asking, I think my colleagues as well, have been asking that we exercise that power with as light of hand as possible,” Wagner said at a Monday afternoon County of Orange weekly news phone conference. “Because we have seen overwhelming compliance (with the stay home orders).”

Newsom issued the stay home executive order March 19 to help slow the spread of the new coronavirus and prevent hospital overloads. It shut down non-essential businesses like nightclubs, bars, dine-in restaurants, concert halls, sports arenas and a host of other businesses.

The order also bans gatherings of over 10 people.

“There are a lot of things being done in response to the pandemic that would not be allowed — Constitutionally — under normal circumstances. There’s no question the police power (under the order) is broad. That said, I always prefer erring on the side of more freedom than less — within reason. And finding out what is in reason, and reasonable has always been the tough question in this response,” Wagner said in a follow-up interview Monday.

Officials from the Sheriff’s department didn’t respond to questions on how it will handle the situation.

In an update Tuesday, District Attorney spokeswoman Kimberly Edds said no protesting cases have been referred to prosecutors.

Protests have popped up in San Clemente, Huntington Beach and Newport Beach since last Friday.

Many protesters said they want to get back to work, others said the stay home order is government overreach. Some don’t believe the virus is a threat citing a variety of conspiracy theories.

“I think this may be a clear case where the interests in public health and public safety outweigh the issues of public protests,” Whitehead said.

He added that U.S. Supreme Court precedent “basically asks whether or not if the state has a compelling interest, and it certainly does here.”

Whitehead said Newsom’s executive order isn’t narrowed to a specific group or activity, because it bans all gatherings of more than 10 people.

“So if they simply say, ‘Look we already got an order in place that no more than 10 people can gather,’ it would be hard for protestors to argue that it was targeted at them — which the government can’t do,” Whitehead said.

The amount of calls into the Employment Development Department are so high, people are automatically referred to the department’s website to navigate filing an unemployment claim.

Wagner said that kind of pressure shouldn’t be ignored.

“What you’re seeing is a number of people around the county rightly asking the question … how do we get it — the economy, this county back open for business? Folks are rightly asking those questions,” Wagner said during Monday’s news conference.

“It is time for us to look at the next step and that’s why we’re doing it. I’m the last guy in the world to say our constituents don’t have the right for us to listen to them and hear their concerns,” he said.

Supervisor Chairwoman Michelle Steel and Wagner said they plan to begin discussions with business leaders and city leaders throughout the county in order to craft an economic reopening plan.

But when sectors of the economy can reopen, depends on when Newsom begins to lift restrictions.

Newsom said he plans to keep the stay-home orders in place until at least early May, while he has a team putting together a plan to reopen parts of the economy. Although, Newsom said, it won’t be getting back to normal any time soon.

University of California, Irvine epidemiologist Andrew Noymer said antibody tests are crucial for lifting the stay-home orders. Antibody tests are blood examinations that show if a person has had the virus and allows researchers to track what percentage of the population has already had it, along with immunity levels.

“My modest proposal is to do free antibody testing for everyone in the general public, including retests within a reasonable time frame,” Noymer said in an interview. “The thing is if you give people the knowledge, at least they can make their own informed decisions.”

“Like if someone is really nervous going back to work, but needs the money, maybe it turns out he has immunity. This is all hypothetical of course, but he could go back to work and not worry about it and get on with his life,” he said.

Souleles also said those tests are in shorter supply than the current tests because they’re new.

“So we believe that antibody testing will be important over time,” Souleles said. “To understand how widespread COVID-19 has been in our community and what levels of immunity are in our community. “