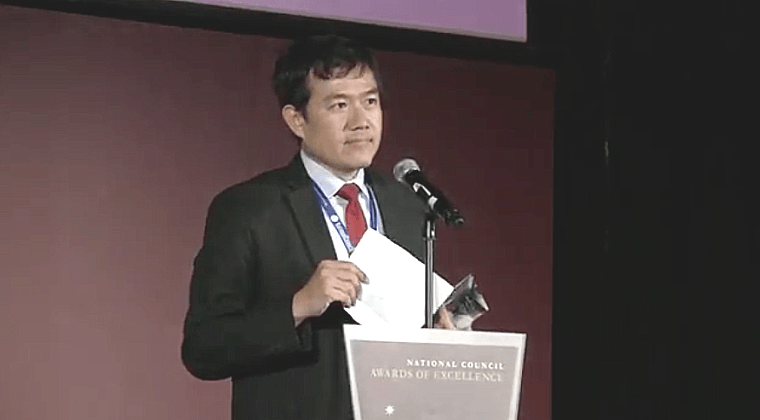 Orange County’s newly-appointed Health Care Agency Director Clayton Chau – a well known clinician and public health executive known for his mental health expertise with immigrant communities – was fined by state authorities back in 2014 for failing to disclose lucrative drug company speaking fees from AstraZeneca and other pharmaceutical companies from 2009 to 2012 while he worked as a top psychiatrist at HCA.

The state fine came after a Voice of OC investigation revealed the payments.

County officials said they were aware of the fine imposed by the state’s Fair Political Practices Commission before they appointed Chau to the position heading up Orange County’s central public health agency but said his experience in the field was a defining factor.

County CEO Frank Kim, who supports Chau’s appointment, said he did discuss the FPPC issue with Chau and made clear the HCA job doesn’t allow for outside employment.

Chau, a resident of Fullerton, at one point co-owned two local restaurants with his partner but it is unclear whether his ownership stake remains. At the time of the Voice of OC 2013 investigation, Chao had an ownership interest in two Rockin’ Crawfish restaurants, one in Westminster and the other in Fountain Valley.

Orange County’s Health Care Agency has come under focus in recent months during the the Coronavirus pandemic like never before and just recently had its two top officials in charge – Richard Sanchez and David Souleles – abruptly leave.

Chau was announced as the new HCA Director this morning in an internal communication by County CEO Frank Kim.

According to the release, Chau will take over as leader of the department on May 4.

He was a member of the Behavioral Health Services team at HCA from 1999 to 2012. From there, he moved to CalOptima, where he served less than a year though September 2013.

Chau left CalOptima after a Voice of OC investigation revealed that he had accepted nearly $150,000 in drug company speaking fees and didn’t report relevant payments on his official conflict of interest form, known as a 700 form.

One of the companies that steered payments to Chao was AstraZeneca, which manufactures a top-selling antipsychotic drug that is on the Health Care Agency’s formulary of medications that may be prescribed by county doctors.

While it is legal for doctors to accept speaking fees from pharmaceutical companies the practice is controversial.

FPPC officials said Chao at the very least should have properly disclosed the payments.

“Although no conflicts of interest were identified, accepting income from a business entity that does business with your governmental entity creates a high potential for conflicts of interest, and failing to report that income creates, at the very least, the appearance of impropriety,” read the FPPC filing.

Chau was fined $2,000 out of a maximum penalty of $5,000 because he had no prior history of violating the Political Reform Act, according to the filing. Chau agreed to the fine to settle the case, the FPPC reported.

In September 2013, two months after Voice of OC published its investigation, Chau left CalOptima to be Medical Director for Behavior Health at Los Angeles CARE Health Plan, a similar program for Medi-Cal and Medicare patients in Los Angeles County.

Chau was most recently the Chief Clinical and Strategy Officer for Mind OC, the not-for-profit created to support the advancement of Be Well OC, a program aimed at working with County of Orange to manage mental health treatment.

In an interview, Kim said Chau had a very relevant background and in his role at Mind OC had been “incredibly helpful and insightful.”

He understands CalOptima and it’s LA equivalent, Kim said, adding “its an incredibly important background to have.”

Kim noted there are many financial management and programatic challenges ahead for coordinating mental health services with the State of California and Chau is very well placed to help the county navigate those issues.

There were several other candidates interviewed and Kim said Chau was by far the best fit.

Regarding Chau’s missteps regarding disclosing improper drug company payments, Kim said he had discussed the oversight with Chau.

That satisfied Kim, who noted the issue was not material enough to disqualify Chao.

Kim noted that the County of Orange has an ethics officer that tracks such outside income and underscored the HCA job can only have one income.

“He made a commitment to me that would’t be an issue,” Kim said.

Correction: An earlier version of this story incorrectly listed Lilly Simmering as the interim head of the Health Care Agency. We regret the error.