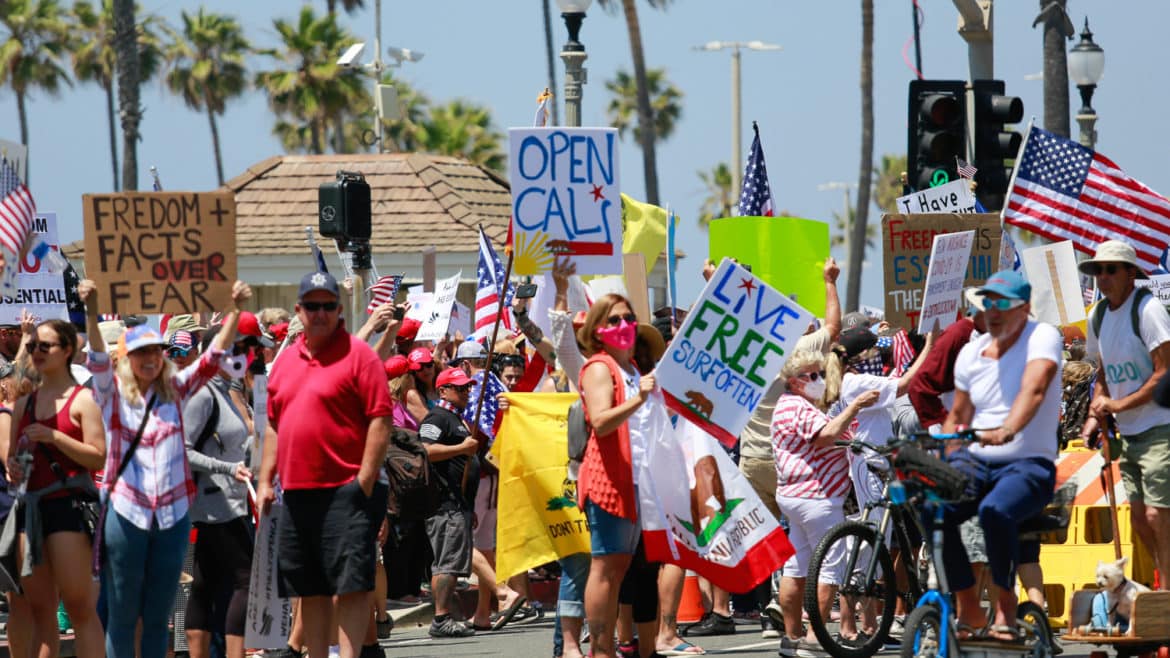 Gov. Gavin Newsom is not surprised by the lawsuits that are gearing up from two Orange County cities over his beach closure, just as protests were gearing up in Huntington Beach and San Clemente.

“All I can say is, doesn’t surprise me,” Newsom said Friday at his daily news conference. “We’ll see what happens this afternoon.”

“We can screw all that up and set all that back by making bad decisions,” Newsom said. “We see the images we saw last weekend … we can start to see a spread again. So that’s the only thing that can set us back.”

Huntington Beach officials announced Thursday night that they were preparing to sue the state, while also closing all of their beaches starting Friday.

“Out of concern for being the only Orange County city with beaches still open, Huntington Beach will be closing all beaches starting May 1, including the City’s bike paths, boat ramps, restrooms, parking lots, and associated recreational amenities,” city officials said in their Thursday news release.

“In addition, activities such as sunbathing, walking, running, and watersports will be prohibited.”

The Dana Point City Council also voted Thursday to sue the state over the beach closures.

“We should be rewarding our communities for practicing safe social distancing and not punishing them by only closing down Orange County beaches. This is unacceptable,” county supervisors’ Chairwoman Michelle Steel said at a Thursday news conference.

She joined a host of OC officials condemning the beach closures.

There’s also been enforcement questions over the beach closures as some local police departments and the OC Sheriff’s Department has indicated it would take a light-handed approach and focus on education.

At the center of the beach closure debate are news photographs from last weekend, depicting packed beaches in Newport Beach. But those photographs have come under scrutiny by city and county officials.

Newport Beach officials insist that the photos were misleading and that the vast majority of beachgoers were practicing safe social distancing. The city also released aerial photos showing a less crowded beach scene.

“The only thing that is assured to advance the spread of the virus is thousands of people congregating together, not practicing social distancing,” Newsom said. “If we can avoid that then we’re going to get to the other side of this with modifications a lot quicker. 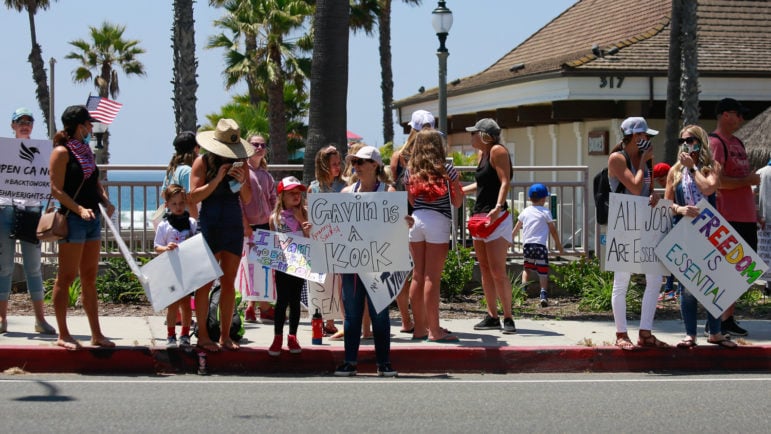 “As it relates to the protesters, all I ask for is this – and that is, take care of yourself, wear a face covering. Do justice to physical distancing. You don’t want to contract this disease,” Newsom said Friday, adding the virus has killed about 2,000 people statewide.

“It has remarkable ability [in] people with asymptomatic conditions to transport to someone else. And so just, protect yourself, protect your family, protect your kids – your parents, your grandparents, your friends, your neighbors, people that you’re protesting with. That’s all I would say to them – and thank them for their expression of free speech,” he continued.

“Democracy is not about just standing still and standing pat. It’s also about free expression. And so I also applaud that, and thank everybody for their willingness to do it. All I ask is just do it safely, do it thoughtfully – not just for yourself, but for your neighbors and for others, and be an example in that respect.”

The governor appears to be pursuing the OC beach closures not through a new executive order, but through a letter Thursday evening to local officials directing all beaches in OC close starting Friday.

Attorneys for the County of Orange have determined that the letter, from the governor’s Office of Emergency Services, is legally-binding on local governments, according to county officials.

“The letter from CalOES, according to our counsel, is sufficient for the governor’s purposes and to be a legally enforceable order,” Supervisor Don Wagner said in a phone interview late Friday morning.

County attorneys have taken the position that state laws require local governments, including cities, to implement state emergency orders during a declared emergency.

“Most importantly here, once the State declares a state of emergency, every political subdivision of the State…is required to implement the emergency procedures of the State,” county attorneys wrote in an April 16 court filing in a lawsuit over whether Laguna Hills can challenge the state’s motel shelter program in their city.

“I think it is the legal implementation of the mistaken policy and the unwise policy from our governor,” Wagner said of the Thursday letter directing OC beach closures.

Nick Gerda covers county government for Voice of OC. You can contact him at [email protected]