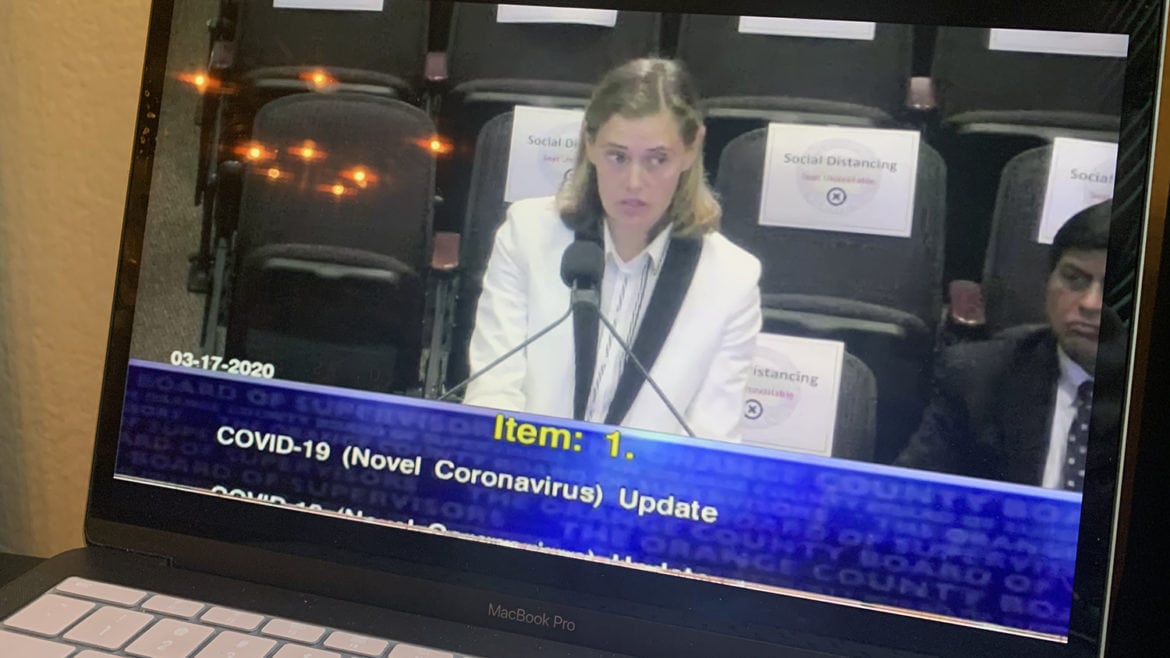 “At Tuesday’s Board of Supervisors meeting, we heard from many constituents that are upset with the recent facial coverings order implemented by our county health officer Dr. Nichole Quick. Many expressed their desire to see it amended or repealed. Unfortunately during the public comments, Dr. Quick received a death threat,” Supervisor Chairwoman Michelle Steel said at a Thursday news conference.

Steel wasn’t clear about how the death threat was made, but was clear in condemning it.

“It is never appropriate to intimidate or threaten violence,” Steel said. “I strongly condemn this behavior and it should never happen again.”

During the public comment period this past Tuesday’s county supervisors meeting, no supervisor took any issue with public comments. Later in the meeting, Steel abruptly announced that Quick had gotten off the call where she was monitoring the meeting because one of the speakers had announced her home address.

OC has seen three of its highest death counts over the past week and hospitalizations have been steadily increasing.

“We’re taking all actions to ensure the safety of our employees,” Kim said at Thursday’s news conference. “I’d rather not get into specifics of protocol — I think that’s inappropriate.”

Quick wasn’t at Thursday’s news conference like she normally is.

At Tuesday’s Board meeting, Supervisor Don Wagner said Quick has been under “some sheriff’s or other protection the last couple of days or weeks or so.” He also condemned the address announcement.

“Dr. Quick has received several threatening statements. Those came both through public comments, and [through] statements that were made online. She has understandably expressed concern for her safety,” said Carrie Braun, the lead spokeswoman for the Orange County Sheriff’s Department.

“We are working with her to address those safety concerns, and looking into the nature of the threats she received,” she added. “There was absolutely concerning statements that were made to Dr. Quick during that board meeting.”

The virus has now killed 142 people out of 5,744 confirmed cases, according to the County’s updated numbers. There were 255 people hospitalized, with 105 in intensive care units. So far, 2,209 people have recovered from the virus and 112,004 tests have been conducted throughout the County, which is home to nearly 3.2 million people.

Nursing homes have been hit particularly hard with virus outbreaks, with 59 of the 142 deaths happening in the homes, so far.

Steel, along with Wagner pushed back against the health order at Tuesday’s meeting and said residents would wear them if they felt it was needed, regardless of the health order.

On Thursday, in response to a question from Voice of OC, Kim said Supervisors don’t have the power to overturn Quick’s order.

“She is the County’s health official. She is an official with her own statutory authority,” Kim said Thursday. “She does have authority and cannot be superseded by our local board.”

He also said Quick gave the order because it’s “her medical opinion on what’s best for Orange County residents.”

Kim on Thursday said after discussions with Quick, he indicated she said she would be tracking Covid infection data but did not see any immediate change to the nature of her mask order.

“The Civil Bureau will begin serving the court-ordered evictions the week of June 1. Despite the fact that these evictions were in process prior to the start of the Governor’s order, deputies will work with tenants and landlords to mitigate the possibility that evicted tenants will experience homelessness during the pandemic,” reads a Wednesday news release from the Sheriff’s department.

Gov. Gavin Newsom issued an executive order barring evictions but the order expires at the month. He hasn’t publicly indicated if he’ll extend it.

“We are moving in the direction of restoring services in general,” court spokesman Kostas Kalaitzidis. “And we’re going to be ramping up over the next weeks and days, services to the public.”

Orange County Superior Court has been largely shut down since mid-March, when the pandemic first started unfolding.

While deputies are slated to take a hands-on approach enforcing evictions, questions have emerged over whether there will be any real enforcement of Quick’s mask order for people in public.

Barnes said deputies would be taking an educational approach to the mask order.

“So I know there is a ‘shall’ order. Our deputies always have … fallen back on education first to take appropriate measures. But we are not and have not dealt through these issues through enforcement. And I will direct my staff not to direct any enforcement towards the shall issue mask requirement,” Barnes said.

On Thursday, Braun said deputies will be taking an educational approach to the mask issue.

“We are not out to have strict enforcement. We’re not out to cite individuals, we’re not out to station deputies or police officers in your community. We’re out here to communicate with you and give you information so you can be safe as possible,” Kim said.

Anaheim and Costa Mesa police departments are taking similar approaches and Irvine’s had its own mask order since April, but Councilmembers recently voted to adopt the County health order.

The Sheriff said it was “years of continued conflict among City Councilmembers” that helped lead him to send the letter warning he may pull patrols. But the conflicts were never specified.

“(Barnes’) concerns with the city are not predicated on one instance or issue. We are hopeful the city will continue to work with us in a manner that allows the Department to continue to provide exceptional law enforcement services,” a statement from Braun said.

Spencer Custodio is a Voice of OC staff reporter. You can reach him at [email protected]. Follow him on Twitter @SpencerCustodio.Digital

Reporter Nick Gerda contributed to this story. You can contact him at [email protected]