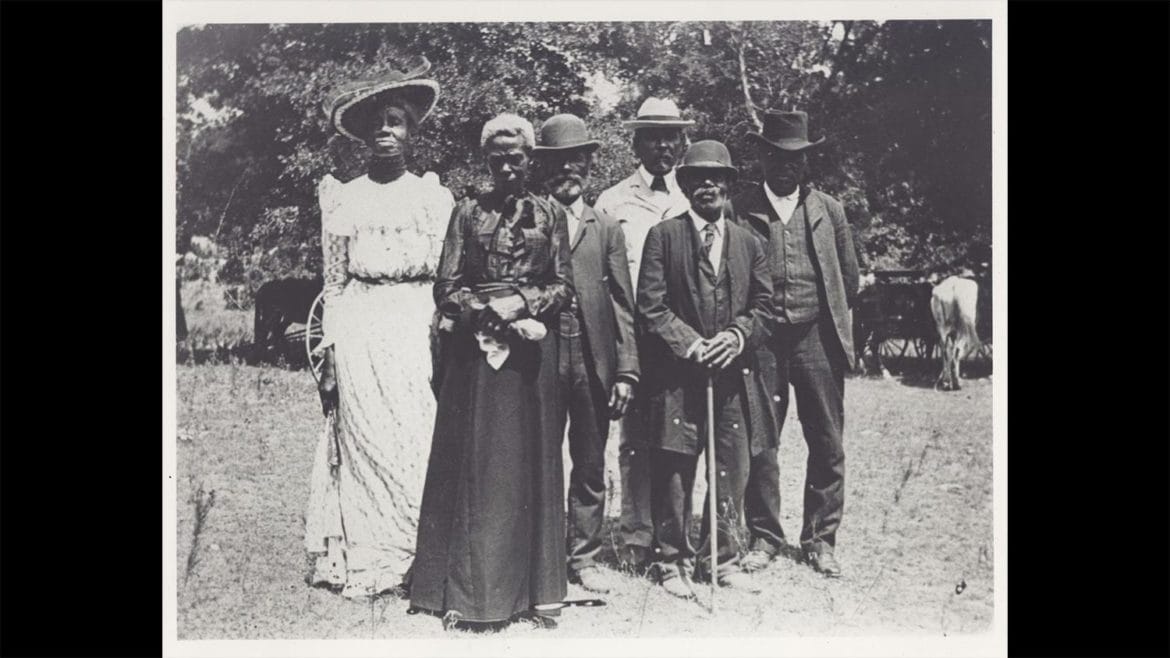 An early celebration of Emancipation Day (Juneteenth) in Texas on June 19, 1900.

Sometimes called Emancipation Day or America’s second independence day, Juneteenth is recognized as a holiday or day of observance in 48 states and the District of Columbia.

Juneteenth is especially resonant this year as Black Lives Matter protests continue in communities throughout the country.

Given Orange County’s traditionally strained relationship with Black residents and a long history of KKK chapters throughout the county, the BLM protests have special import here as they place a new generation of Black residents on center stage to focus on issues of police budgeting and use of force like never before.

But what is Juneteenth exactly?

On Jan. 1, 1863, Abraham Lincoln formally issued the Emancipation Proclamation, freeing all enslaved people from the Confederate states and declaring their freedom in America now and forever. However, issuing the document wasn’t an immediate fix.

In 1863, news traveled slowly across the United States. And it wasn’t uncommon for slaveholders to withhold this information from enslaved people until the end of harvest. Texas, the westernmost slave-owning state, was among the last to receive word of the proclamation.

On June 19, 1865, Gordon Granger, a Union Army general, finally arrived in Galveston, Texas where he issued the order from the president of the United States. He not only announced the end of the Civil War but revealed that enslaved people were to be freed. 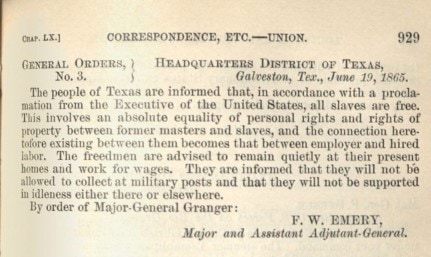 Image courtesy of the Texas State Library and Archives Commission

Although Gen. Granger’s orders didn’t immediately free them, they did spark celebration for newly freed Black people, and since then June 19, or Juneteenth, has been marked as the day of commemoration for the end of slavery.

It’s Not Just About Emancipation

Justice Crudup, a Black Lives Matter activist based in Anaheim, said he believes that June 19 should be recognized as a national holiday for many reasons.

“I think a lot of American culture has engulfed and promoted Black culture without actually pledging allegiance to Black intellect and Black heritage,” Crudup said.

The recent protests across the nation, sparked by the death of George Floyd, have come to represent a momentous event in civil rights history. They are reminiscent not only of the 1960s civil rights movement, but also of the uprisings in the 1800s which led to the Emancipation Proclamation.

Crudup and his family started celebrating Juneteenth on the 13th, and will continue their celebrations throughout the weekend — a common custom. He said that while the 19th was the big hammer on the nail, with Lincoln’s signing of the executive order, it is important to remember and acknowledge the significance of the fights and the activism that took place to make it happen.

How to Celebrate During a Pandemic

Even though in-person celebrations and gatherings have been cancelled due to the coronavirus pandemic, people can commemorate Juneteenth by educating themselves and those around them.

Visit the The Smithsonian’s National Museum of African American History and Culture. All day on Friday, June 19 and Saturday, June 20, 2020, they will host an online celebration where they “(bring) the Museum to you through presentations, stories, photographs, and recipes from the Sweet Home Café.”

Check out  “Observing Juneteenth in 2020” , a story recently posted by PBS.  It includes informative videos about this day.

Engage with the black community in Orange County and learn more about black history by visiting the websites of these Orange County based organizations:

“I think what Americans should be doing is not only watching your standard documentary about Black history but engaging in conversations with individuals who may not understand the full scope of Black history and how it has basically been destroyed within the American curriculum,” Crudup said.

Crudup said that Americans look at slavery, Jim Crow laws, and Martin Luther King Jr., and think that is Black history. But there are many more people and events that they should familiarize themselves with to broaden their perspectives.

Despite recurring proposals across multiple administrations to recognize Juneteenth as a national holiday, the issue is still the subject of debate. Crudup said that Americans should be questioning this unacceptable status quo.

“I think Americans should want to question it. Why is Juneteenth not a national holiday? I mean, who is preventing it? Why has it been such a hard thing to swallow in the past?” Crudup said.

“If people don’t know where we’ve been, then we aren’t looking at our history, then how the heck are we going to know where to go for progress?”

For people who are looking to gather from a safe distance, the Orange County affliate of Susan G. Komen will be hosting a virtual Juneteenth on June 19 from 6 to 7 p.m on Facebook and YouTube Live.

Susan G. Komen partnered with the OC branch of the National Coalition of 100 Black Women and the OC Heritage Council to help bring on Dr. Veronica Jones M.D. from City of Hope and Letitia Clark, Tustin mayor pro tem, for a question-and-answer panel which will will dive into discussions about breast health disparities among the Black community and other relevant topics.

Black Lives Matter protesters are embodying the spirit of the holiday by continuing their activism through the Juneteenth weekend. Individuals can attend one of five protests coming up at the end of this week in Buena Park, Irvine, Seal Beach, Newport Beach and Santa Ana. Most of these protests encourage the use of face masks and social distancing to adhere to COVID-19 safety measures.

Below is a chart of all protests in Orange County and their specific times: