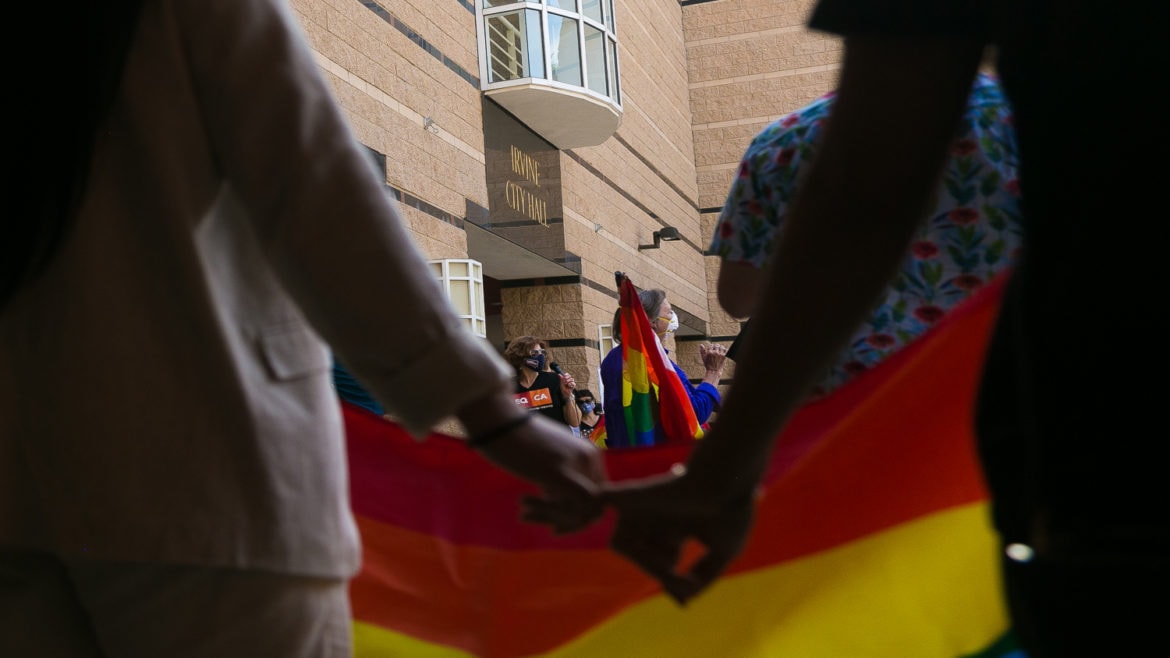 Protesters gather in front of Irvine City Hall June 23, 2020, to rally for flying the pride flag over City Hall.

The LGBTQ+ flag will fly above the Irvine City Hall every June after the City Council voted 4-1 Tuesday to approve a resolution calling for an annual display of the flag.

The banner will be flown under the United States flag from Harvey Milk Day on May 22 through the end of June every year.

The council also approved another resolution that established a policy on how other commemorative flags could be permitted by the body.

The resolutions were proposed by council members Melissa Fox and Farrah Khan, both Democrats. The item received broad public support, with several dozen protestors led by Khan and Fox raising the flag outside City Hall before the council’s meeting and a wide majority of comments submitted to the panel calling for the approval. 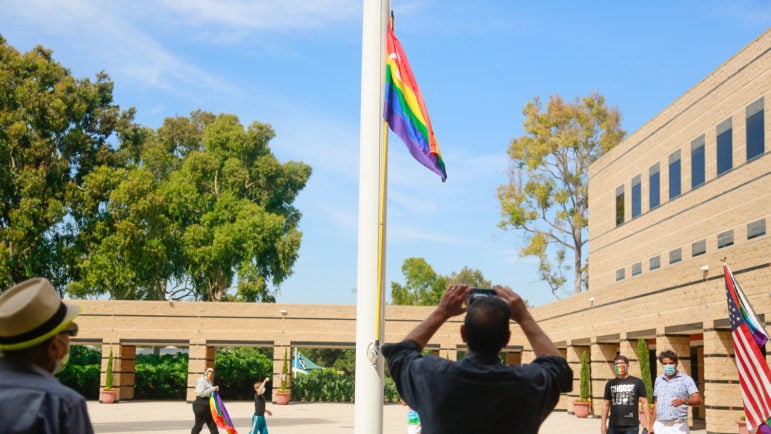 Protestors raised their own pride flag mounted on a make-shift pole in front of Irvine City Hall on Jun. 23, 2020.

“I know for both of us, we have worked hard on a variety of issues to support our local LGBTQ community,” Khan said at the dais. “There is no better place to showcase that message than right here at our own City Hall.”

Council members Anthony Kuo and Mike Carroll also voiced support, with Carroll mentioning other cities that had approved similar resolutions in previous years and Irvine’s opposition having left it as an “outlier.”

Mayor Christina Shea, the lone dissenter, said she thought the decision to open up opportunities for commemorative flags would be “problematic.”

“We have three flags we fly, we have 150 languages here, and to have every individual group flying their flag during the year is going to be very problematic,” Shea said. “We all signed the proclamation, but I will not be supportive of flying the pride flag.”

Last year, an identical motion put forward by Fox was shelved by the council following two hours of discussion on the issue that turned heated, with Carroll calling the pride flag a “spectacle of divisiveness” and criticizing Fox’s decision to bring the discussion in front of the council.

“June is pride month, and the rainbow flag is a powerful symbol,” Fox said during Tuesday night’s meeting. “I hope that this time this will not be a flag that is considered divisive, but a flag that brings us together in love and support for everyone.”

Carroll defended his comments at the meeting, stating his remarks were not meant to denigrate the LGBTQ+ community and that he had just sponsored the council’s proclamation of June as LGBTQ+ Pride Month, a first in Irvine’s history.

“I think that was taken out of context, that was me quoting another council member on a different issue entirely,” Carroll said referring to his comment during last year’s discussion.

At that meeting, Carroll said he was quoting from an earlier speech by Fox on the California Values Act, but that he had “adopted the words as his own” for the discussion on the flag.

Carroll also said that his decision was changed in part because he did not know that the colors of the flag represent different meanings.

“The one thing I did not know last year was understanding, and it was mentioned in public comment, that the colors signify things,” Carroll said. “I do think those things are picked up by the red and white stripes above us… it’s unequivocally clear to me this is a very personal issue and I get it. I understand.”

Khan said the pride flag was “more than just a flag.”

“The passage of this item tonight will be a huge step forward,” she said.