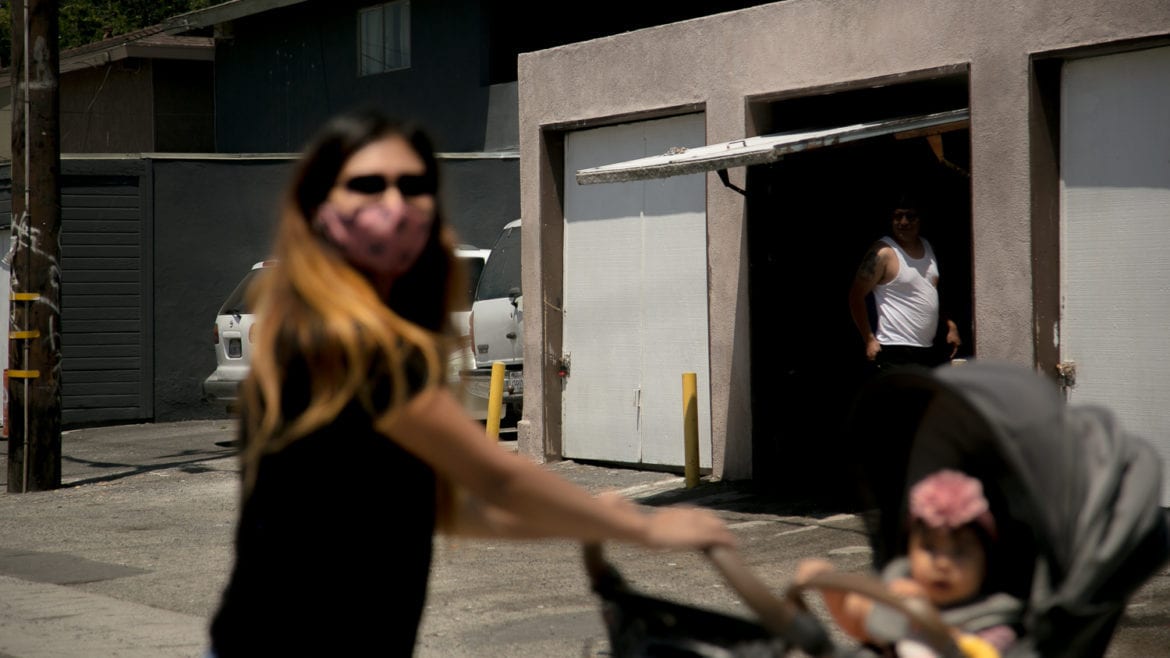 Residents in the Oak View neighborhood in Huntington Beach.

Flag-waving lockdown protesters, maskless pedestrians, defiant local businesses and beachside baptisms have catapulted Huntington Beach into both fame and notoriety over the course of the local coronavirus pandemic.

Seeing the local emergency as an overblown issue and public health orders to stay home and mask up to prevent the virus’ spread as infringing on civil liberties, some residents argue their defiance is patriotic.

But it’s also drawing the anxious side-eye of the city’s Latino neighborhoods like Amberleaf, where resident Susana Gonzalez says much of her community works essential service or trade jobs downtown and frequently comes into contact with people who aren’t masking up.

Knowing Latinos are among the hardest hit by the virus locally and across the U.S., Gonzalez said she fears her neighborhood and the other pockets of Latino residencies like Oak View will bear the brunt of any consequences for other people’s actions.

And for a city that’s 61% white, according to Census data — a point emphasized repeatedly by social media critics when the city goes viral on platforms like Twitter — Gonzalez said the issue calls for renewed attention to the existence of the other nearly 40 percent of the city, many who live in non-white neighborhoods in Huntington Beach like hers.

“I think, personally, the county needs to put its foot down and be less afraid of what the white people have to say,” she said. “But they won’t.”

In the zip codes spanning both the Amberleaf and Oak View neighborhoods, there were a total combined 839 COVID-19 cases not accounting for skilled nursing facility cases as of Friday, July 24, according to county data. The city’s total confirmed positive case count, minus nursing homes, was 1,830.

Jadira Lopez, a renter in Oak View, said awareness of what’s going on in the city among her neighbors has picked up, and that they’ve largely taken it upon themselves to make sure their community stays safe.

“It’s more at this point taking care of ourselves, taking care of our own community,” Lopez said. “The city doesn’t take into consideration our little pockets of low-income households, you know, the ones that get overlooked.”

Lopez is a former organizer at the Oak View Renewal Project, which was started in 2006 to address community health, police relations, and child education in the neighborhood. It’s since stopped its operations.

Local activist and former Democratic Party of Orange County vice chair Victor Valladares said “there are a lot of people in the neighborhood who are sick but don’t like talking about it — a lot of folks don’t know there are free centers to get tested for COVID-19.” 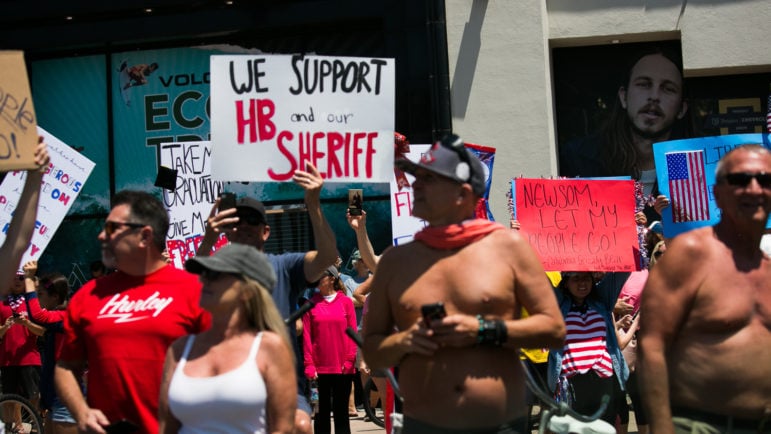 “And the fact that there’s a lot of folks that work cleaning houses, potentially these same anti-maskers’ houses — these smaller communities are getting exposed to that,” added Valldares, who co-founded another neighborhood advocacy group that’s still active, Oak View ComUNIDAD. “And a lot of people from our neighborhoods who work in the downtown area – now they have to go back home and potentially expose their family and other community members.”

The city has attracted news headlines from just about every local outlet about beachgoers’ dismissal of mask orders, protests against the statewide pandemic lockdown, and defiance by restaurants like Basilico’s Pasta e Vino — which is requesting patrons to remove their masks before coming inside.

Responding to the media sensation and backlash from the “haters,” the restaurant has since taken to social media to further speak out, posting information about First Amendment freedoms and constitutional protections, Benjamin Franklin quotes and critical messages about American physician and National Institute of Allergy and Infectious Diseases Director, Dr. Anthony Fauci.

The way Basilico’s owner Tony Roman sees it, “some don’t understand that many of us never needed government orders to do anything with respect to the virus. Why? Because most of us are responsible, hard-working citizens who will always do what makes the most sense for us, our neighbors and employees in terms of health and safety.”

In the same statement he posted to Facebook, he acknowledged he wasn’t a medical expert but said it’s about businesses like his, which was built in honor of his mother who founded the business 21 years ago and his first generation Italian American family, that may not fully recover from the lockdown.

Yet he also likened people “aggressively” calling on his restaurant and others to abide by health orders to the “Secret Police,” claiming he and others pushing back on the Governor’s orders are the ones being oppressed. 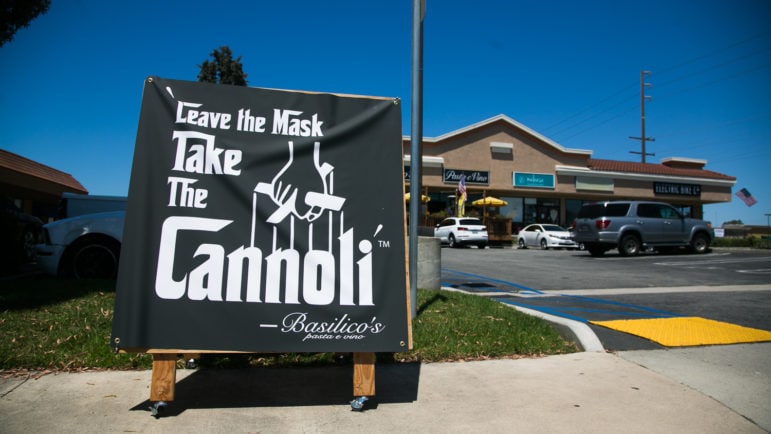 Huntington Beach City Council members like Mike Posey, in a Friday interview, said “we obviously ask that our residents and visitors abide by the Governor’s order to socially distance, wear masks when they can’t be socially distanced.”

On the other hand, he added, when it comes to going outside or engaging in political protests, Posey maintained “residents want to go out and enjoy their environment, and the First Amendment protects the right to assembly and free speech.”

Yet as news reports continue on other residents’ dismissal of those guidelines, Latinos in the city are the ones “hit the hardest,” Valladares maintains. That tracks across the county.

Latinos have nearly 42 percent of all cases and over 39 percent of deaths in Orange County, while accounting for 35 percent of the population. The largest share of cases, according to county data, is from an “unknown” group, which holds nearly 48 percent of cases.

Zip codes spanning Latino-dominated areas like Santa Ana and west Anaheim have for weeks chalked up the highest COVID-19 case numbers, according to county data.

Statewide, the Latino community accounts for nearly 56 percent of all cases and over 45 percent of deaths, but makes up 39 percent of the population.

The issue has even prompted county supervisors like Andrew Do — a Republican who’s running for reelection this year — to team up with the only Democrat on the board, Supervisor Doug Chaffee, and launch the county-level Latino Health Equity Initiative, a program aimed at addressing barriers to those communities’ health response like language and transportation access.

Asked by reporters about the city’s recent news headlines and what it means for Orange County as a whole, county officials in a Thursday, July 23 news conference opted for pleas to the community for compliance with health guidelines.

“Hopefully citizens will realize the importance of it and comply with the order,” said county Health Care Agency Director and acting Public Health Officer Dr. Clayton Chau. “Your decision not to participate costs the community dearly.”

In the end, Chau said to reporters, “we all get hurt together.”

Yet the stark reality, argue residents like Valladares, Gonzalez and Lopez, is that some will be hurt more than others.

And those people are likely to be their neighbors.