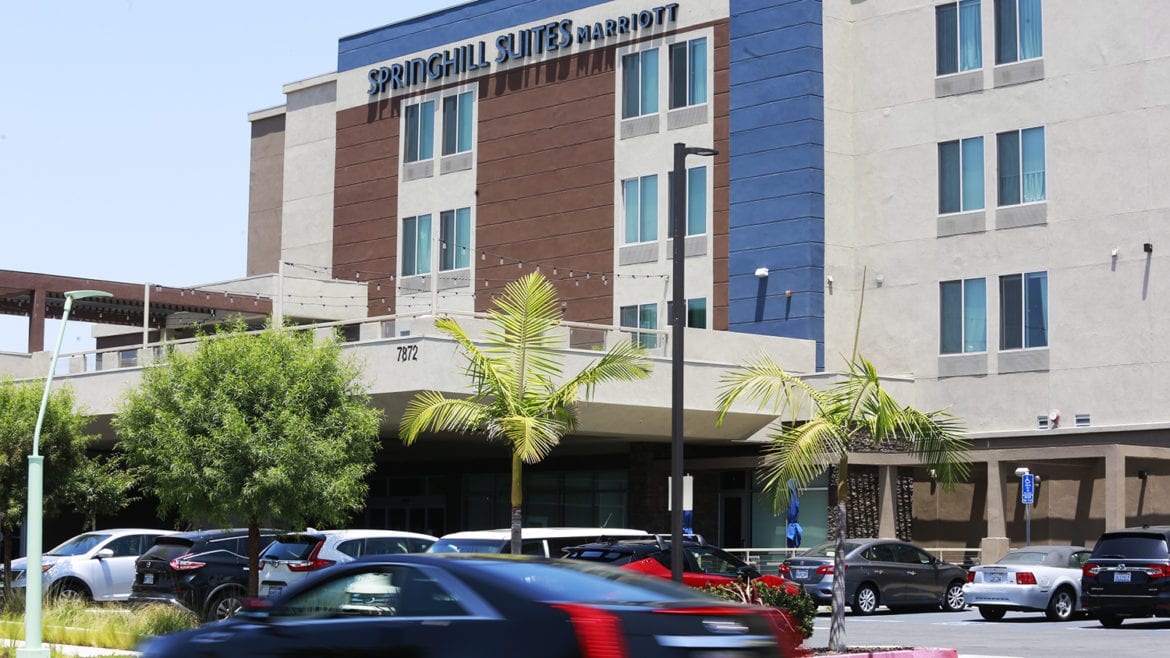 The Springhill Suites in Huntington Beach, which Orange County is leasing for temporary homeless housing during the coronavirus pandemic, on June 30, 2020. County officials are looking at potentially buying motels or hotels for permanent homeless housing, though no particular properties have been identified publicly.

Orange County officials say they’re looking into buying local motels and converting them into permanent housing for homeless people with support services, as the state offers over half a billion dollars for counties and cities to pursue such projects.

The effort comes as the county is sheltering hundreds of homeless people at local motels that are leased as part of the state’s Project Roomkey program to slow the spread of coronavirus among homeless people.

Now, the state Legislature and Gov. Gavin Newsom have included $550 million in their new state budget to buy motels and convert them into permanent supportive housing – plus $350 million for supportive services once they’re up and running.

Homeless advocates and county officials are welcoming the infusion of funds as an opportunity to help end homelessness.

“It’s a great opportunity. We meet every week to discuss that exact issue. We are looking at the motels that we are currently using and what we could potentially purchase,” Jason Austin, who oversees the county’s homelessness efforts as the director of care coordination, said in an interview Tuesday.

“We have been very lucky up to this point that there have not been dramatic numbers of individuals from our homeless community that have either been positive or [need] a higher level of [medical] care,” Austin said, referring to the existing motel program. “So the impact of these programs is that we are literally saving people’s lives.”

The effort has been getting vocal support from county Supervisor Lisa Bartlett, who told Voice of OC this week the county should “absolutely” pursue its share of the $900 million the state is offering for the motel purchases and services.

“I think it’s a good idea to convert Project Roomkey hotels to [permanent supportive housing], but only in cities in locations where it’s appropriate,” Bartlett said Wednesday.

“My goal is to help solve homelessness, not just spending dollars on financial band aids for the short term,” said Bartlett who also serves as president of the California State Association of Counties.

“Counties have a really great opportunity with funding from the state to assist in implementing long term solutions for the homeless population.”

Newsom highlighted the new money for motel purchases – which he calls Project Home Key – on Tuesday during his daily news conference.

“This pool of money – this $550 [million] – provides this flexibility…for the counties and cities to procure assets like this,” Newsom said as he stood in front of a motel in Northern California.

County officials have not answered when they plan on moving forward with potential motel purchases, but said this week they’re actively working on it with their real estate representatives.

“There will never be a cheaper time to buy these buildings,” said Brooke Weitzman, a leading lawyer for homeless people in Orange County. “Now is the moment that Orange County needs to act if they’re looking for solutions.”

As of Monday, Orange County was sheltering 495 homeless people through Project Roomkey at motels and hotels who were at higher risk of death from coronavirus because they’re over 65 years old or have underlying medical conditions that put them at greater risk, said Austin, the county official overseeing the program.

An additional 39 homeless people who have tested positive for coronavirus were isolating at separate motels under the program, he said.

“I think that what we’ve pulled up has been very successful so far. We have not had any major incidents or issues as far as working with the cities. We are trying, again, to be great partners with law enforcement, city management,” Austin said. “So far so good.”

The county now plans to start adding more support workers to help link homeless people at the motels to available housing, he added.

When Orange County applied to the state in May to re-open the local economy faster, it promised to meet a state standard of making available 1,029 isolation or quarantine rooms for people experiencing homelessness, equivalent to 15% of the nearly 7,000 homeless people counted in OC’s most recent point-in-time count.

The state granted permission for Orange County’s re-opening in late May based in part on the county’s promise to make such rooms available.

As of this week, the county had 744 total rooms available, according to data reported to the state, or 285 rooms fewer than were promised under the re-opening application.

Asked why the county hadn’t met the minimum room benchmark promised to the state, Austin said there wasn’t yet demand for that many beds, and that as capacity gets filled up the county would look to lease more motels.

“We still have capacity within our existing motel agreements. We look at these numbers every single day [and] as we get closer to getting completely to capacity, that’s when we…make decisions” about bringing on additional sites.

But Weitzman says there’s significant demand for the motel rooms, but barriers have made it more difficult for people to get access.

Among those barriers, she said, are rules requiring people who have not tested positive – the vast majority of the Project Roomkey residents – to stay in their rooms, except to smoke or for pre-arranged outings like doctor’s appointments.

“There is that lack of dignity that comes with total isolation,” particularly at a time when the rest of Orange County has been allowed to go to coffee shops and enjoy parks, Weitzman said Tuesday, before restrictions on indoor restaurant dining we re-imposed.

Austin said people can get to appointments and go to the store if they arrange transportation ahead of time with the motel program’s operator, the Illumination Foundation, an Orange-based nonprofit organization.

“Part of our agreement with Illumination Foundation is, if individuals need transport for medical appointments, especially housing appointments…if they need that, even going to the store, as long as they work with our provider and our provider is transporting…we’ve been doing that the entire time,” Austin said.

Weitzman said people can go to appointments but that other kinds of physical distancing activities are not allowed.

“In most cases people are getting permitted to go and getting a ride to specific appointments. They’re not allowed to say, ‘hey, I’d like to go see my kid today,’ or ‘I’d like to go for a walk at a park today’, or ‘visit a coffee shop where I’d like to wear a mask and [practice] social distancing,’” she said.

“They just want to be able to go for a walk, ride their bike, get a little exercise, maybe buy a snack, see a family member.”

Paul Leon, president and CEO of the Illumination Foundation, said the limitations on people’s movements are indeed a downside that leads some homeless people to not join the motel program. But he said the limits are there to protect the other at-risk people living at the motels from a potential virus outbreak.

“That’s the biggest drawback. As a matter of fact, that’s why some people won’t go in there, because they’re so used to going in and out” at regular shelters, Leon said.

“These clients can get out a little but, but they’re with all kinds of people that are vulnerable, so they can’t go in and out,” he added.

People living at the motels “were really having a hard time when [society] opened up, because they wanted to go out,” Leon said. But he said the vast majority of people living at the Roomkey motels are comfortable and happy to have a room and a shower.

Austin said that the overall goal of the program is to provide a room for people to isolate and keep themselves and others safe.

“Being in the motels, it’s a challenge. But part of the process is, this is to be safer at home,” he said, adding that the goal is “helping people and saving lives.”

“And we have to look at not only the needs of the individual person, but…the need for everybody to be safe.”

Orange County officials have committed to continuing Project Roomkey at least through the end of July, though they say the funding remains uncertain, with the county finding out from the state each month whether the next month’s money is approved.