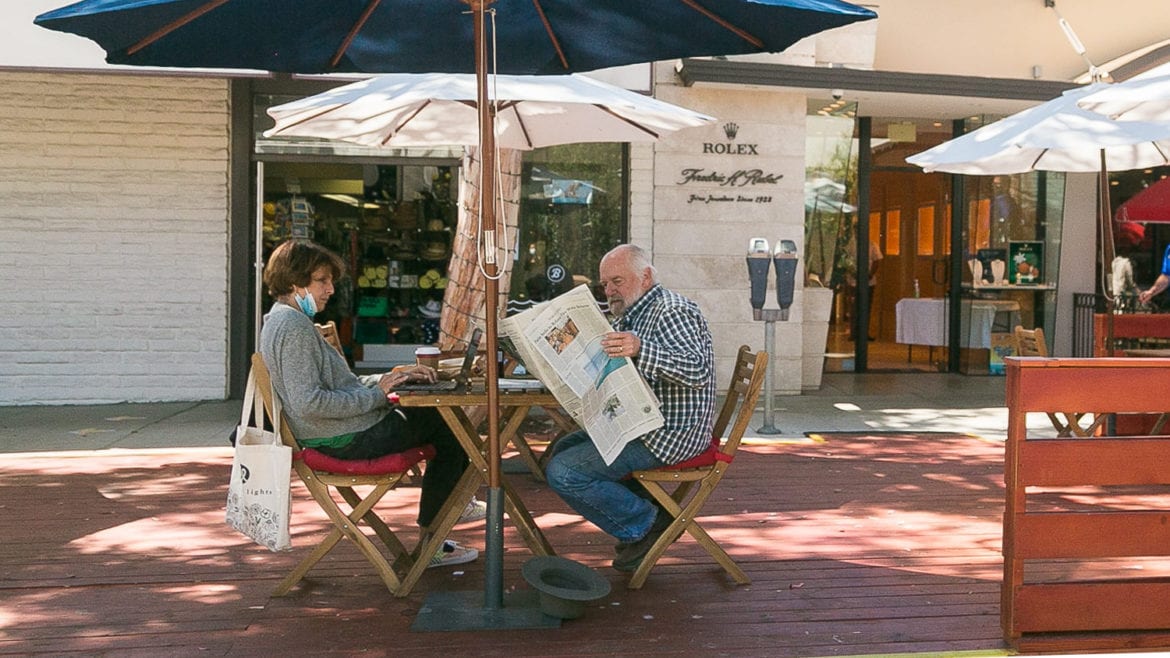 The outdoor expansions come as a result of coronavirus public health restrictions on businesses' indoor operations.

Parts of a vehicle roundabout and surrounding streets in Orange’s historic downtown plaza are now part of a livelier town square, where people can chat at a table outside the corner cigar shop or under outdoor heating lamps, sitting where they would normally park their vehicles.

In north county cities like Placentia, a row of storefronts on Santa Fe Ave has morphed into a hub of al fresco eateries atop green turf, rolled over the street and closed off completely from traffic.

Amid coronavirus concerns, public health restrictions on local businesses’ indoor operations have all but pushed restaurants and retail stores outside and onto parking spaces, sidewalks, and roads — reclaiming local avenues for pedestrians.

The results have largely overhauled some areas’ urban aesthetic.

Yet the question remains among residents and community leaders — who these days have likened parts of their cities to an entirely different country — will it all continue after the pandemic?

Officials and experts say it depends on regulatory decisions, reforms to urban planning and traffic circulation, and a probe into who the county’s streets really belong to.

“As we go forward, you have to ask yourself, does this all really need to go away?” said Santa Ana Councilman Phil Bacerra of the similar outdoor restaurant expansions in his city, namely along sections of Fourth Street downtown, in a Wednesday interview. 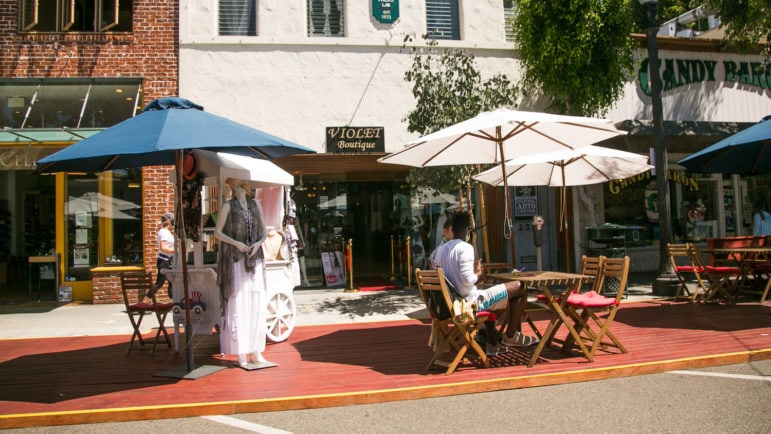 He asked: “What really will serve the community more in that space: parking space, or more outdoor seating?”

“We’re starting to see a culture in Santa Ana develop that is very similar or resembling to what you see on the streets of Paris, where you have outdoor dining, and all the societal interactions that come along with it,” he added.

When the pandemic subsides, Bacerra said the city has an opportunity to rethink its traffic circulation on streets and find ways to create “organic fabrics” of community blocks and outdoor dining. 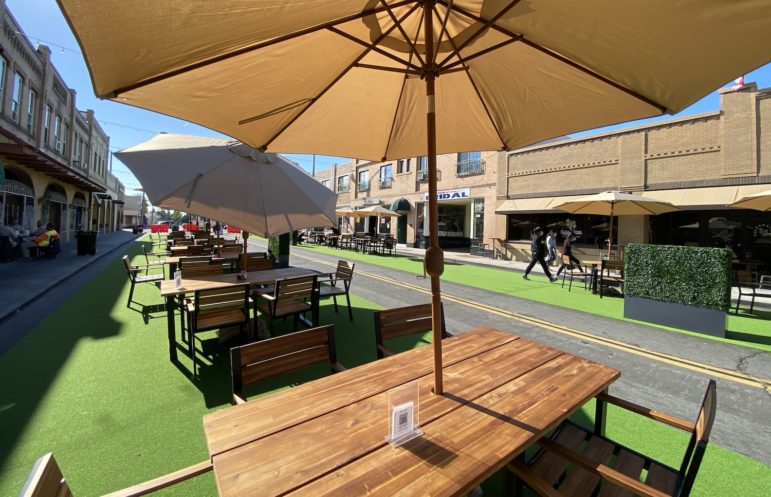 Tables and chairs take over Santa Fe Ave in downtown Placentia on Aug. 15.

“What’s to say that we as a city don’t really take a holistic approach and see which of these streets really need to remain open to traffic?” he said. “That segment between Sycamore and Broadway — is that a critical piece of our city’s traffic circulation?”

Impacts to traffic circulation would be a substantial concern at the overhauled plaza in Orange, said city spokesman Paul Sitkoff, if officials were to find ways to make permanent the Orange Circle businesses’ takeover of the traffic roundabout’s parking strips.

“When you have a freeway entrance just a mile to the south, it’s something you have to consider when talking about the long term viability of these parking space and road closures — balancing that, of course, with the very positive effect it’s having on the commercial center,” Sitkoff said. 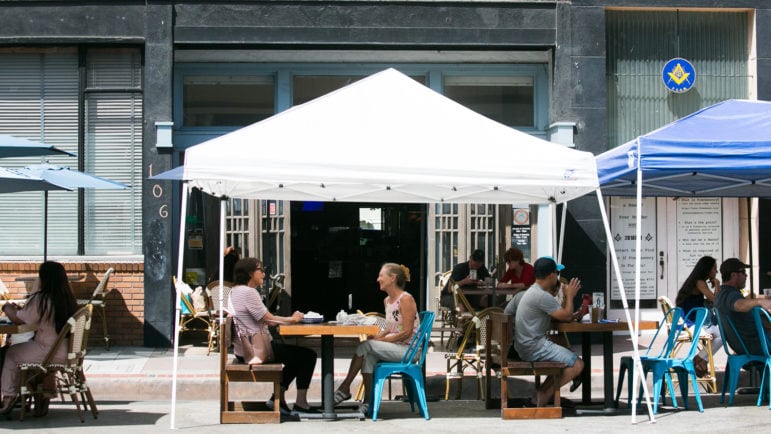 Diners enjoying the weather at the Orange Circle in downtown Orange.

In Laguna Beach, Councilman Steve Dicterow said any permanent continuation of the downtown promenade might face bureaucratic urban planning barriers — “we may not have total control.”

While his city council recently extended the promenade’s permit to 2021, to continue blocking off more parking spaces downtown after the pandemic might bring the seaside city before regulatory bodies such as the state Coastal Commission.

“I think we’re moving in the direction of making it permanent, so long as we have the authority to do it — for example, if we eliminate parking spaces, the (state) Coastal Commission has authority to say we’re not allowed to do that, on the basis that it makes it harder for tourists to find parking,” he said.

He added: “Normally we’d have to replace the spaces one-on-one or try to mitigate what’s considered the problem created by removing spaces; but I also think we make it more tourist or visitor-friendly with the promenade — it’s something we won’t know the answer to until we ask them.” 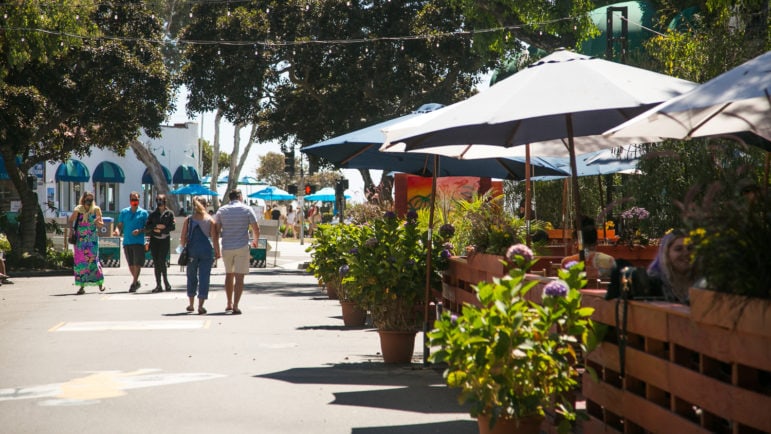 Businesses along the new promenade in downtown Laguna Beach, officials say, are doing better than they even were before the pandemic. 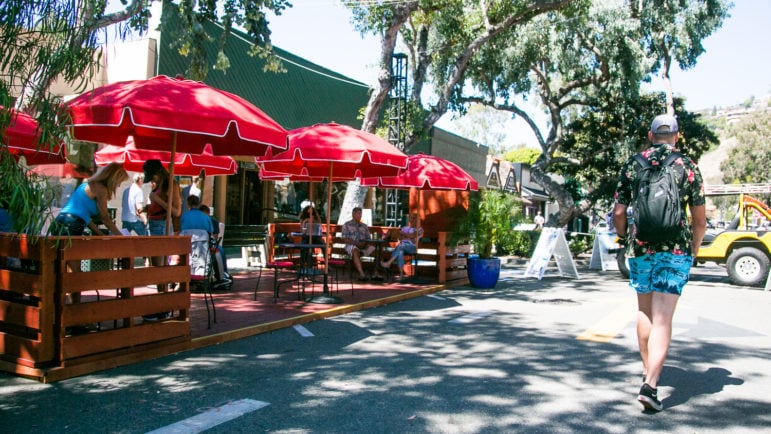 Bacerra remarked that pre-pandemic regulatory environments and restrictions on outdoor business operations have now had to relax under the current shutdown’s strains.

Coming out of the crisis, he said, “are we going to (continue to) relax some of our standards or notions that might be considered outdated, and help these businesses survive, or are we going to cling on to them?”

For more than 25 years, Dicterow said the downtown promenade idea — which has been lauded by residents — was one he could “never get enough support around town to make happen.”

Then COVID-19 hit, and “forced us to try to do this to help out those businesses,” he said, adding those businesses have since told him they’re doing better than they were even before the pandemic. “It’s become a success beyond, I think, what anyone imagined.”

The area has become “a walking paradise for people,” he said. “It’s created the atmosphere I’m looking for.”

Then there’s the question, according to urban planning experts like Santa Ana resident Peter Garcia, of whether it’s all happening for the right reasons.

Whose Streets Are These?

Garcia — an active transportation advocate who specializes in mobility in communities of color — has different ideas of what “open streets” mean.

“When you think about how these streets are opening up to pedestrians, they’re kind of a response to a need for businesses to stay afloat rather than a need for open space, active transportation, biking,” Garcia said, challenging local officials to ask who they’re doing it for:

“Whose open streets are these?” 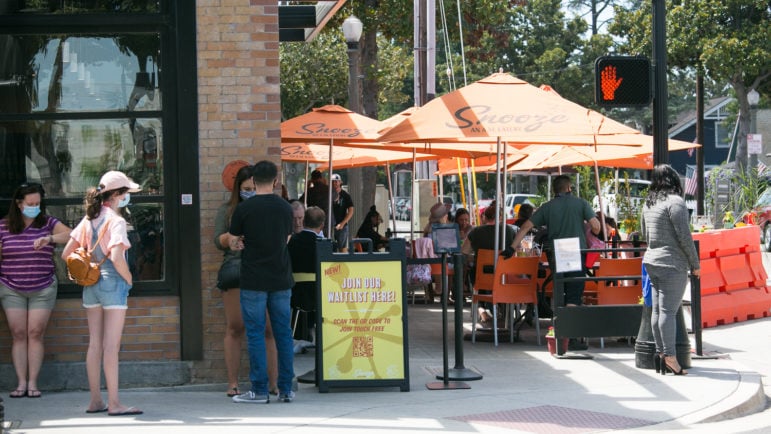 Outdoor dining at Snooze in downtown Orange has taken over sections of the street.

Long before the pandemic reared its head, he pointed out, cities like San Francisco annually closed off entire streets to provide open space alternatives for communities like the city’s Tenderloin district, where park space and open space is lacking.

In Garden Grove and Santa Ana, debates have raged about park-poor working-class areas like the west-end Santa Anita neighborhood, or the Townshend Gang Injunction area. 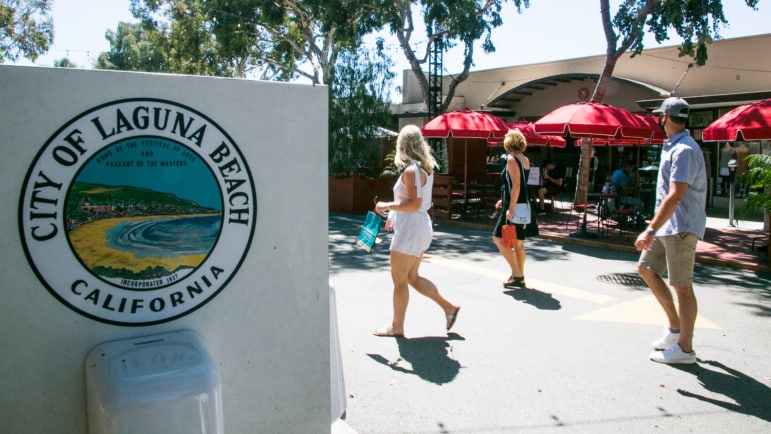 Garcia said those areas could benefit from events closing off traffic lanes for bikers, skateboarders, and pedestrians to roam — an alternative, albeit not a perfect one, that he said could help address those neighborhoods’ open space needs.

“My response to these businesses’ street takeovers is, okay — I suppose it’s one way to achieve open streets, and it’s cool to allow businesses to operate like this — but at the same time,” he said, “are we providing the same open street access to low-income people? People in park-poor, socioeconomically disadvantaged neighborhoods?”

Garcia added: “We have to think beyond just providing relief for business owners — which I’m not against. But there has to be a further interrogation into how this could also benefit all residents, not just entrepreneurs.”

Meanwhile, with much uncertainty about how long the pandemic will last, it appears restaurant tables won’t be giving up their parking spots any time soon.