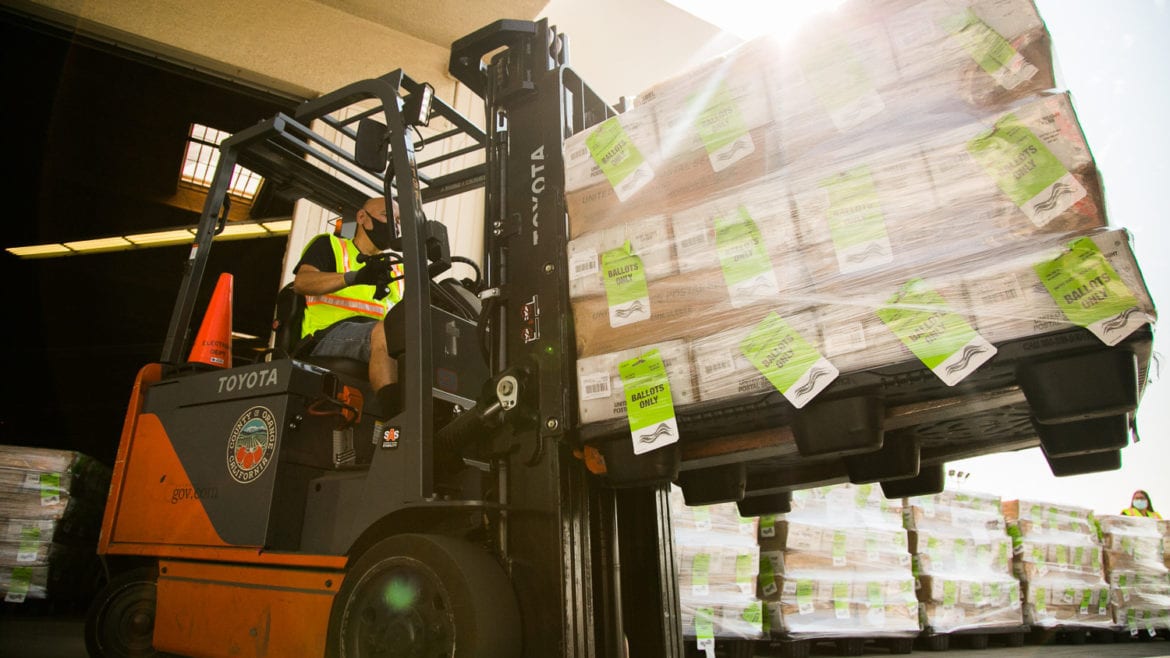 An election worker loads mail-in ballots into a truck to be delivered to the U.S. Postal Service on Monday, Oct. 5, 2020.

Voters have the choice of mailing back their ballot, dropping it off at any of the 116 ballot drop boxes across the county, or delivering it to any of the 167 vote centers that open starting Oct. 30.

People also have the option of voting in person at a vote center.

In-person voting has already begun at one location: the county Registrar of Voters headquarters in Santa Ana, where a vote center opened Monday.

Just before putting the ballots in the mail Monday, the registrar, secretary of state and DA answered questions voters may have as they’re getting ready to vote this month.

How Secure is Voting by Mail?

Kelley has said he considers voting by mail to be even more secure than voting in person, because of safeguards like checking signatures on ballots to make sure they match the signature on the voter’s registration.

“The signature verification process is one of the important safeguards with vote-by-mail,” said Padilla, adding each ballot also has a barcode that’s unique to each voter.

“The research is there, the studies have been done. Voter fraud in America is exceedingly rare. Voter fraud in California is exceedingly rare,” Padilla said. Voting by mail, he added, “is nothing new in California, It’s been growing in popularity for years. More than 70 percent of the ballots cast in the [March 2020] primary were vote-by-mail ballots.”

On Election Day, Kelley’s office will have about 300 staff in the field who can be dispatched by radio to respond to any issues that come up.

The DA also said he would not tolerate the kinds of behavior seen in the 1988 election, when private poll guards were stationed by Republican officials outside polling places in Santa Ana. The Orange County Republican Party and then-Assemblyman Curt Pringle later agreed to pay out $400,000 to settle a lawsuit alleging they stationed guards there to deter Latinos from voting.

“It was very significant, and very troubling,” said Spitzer, a Republican, of the poll guards incident.

“That will not be tolerated in Orange County. There will be absolutely no voter intimidation, period. Everybody has a right to vote,” he added. “I will not tolerate that. The vote is sacred.” 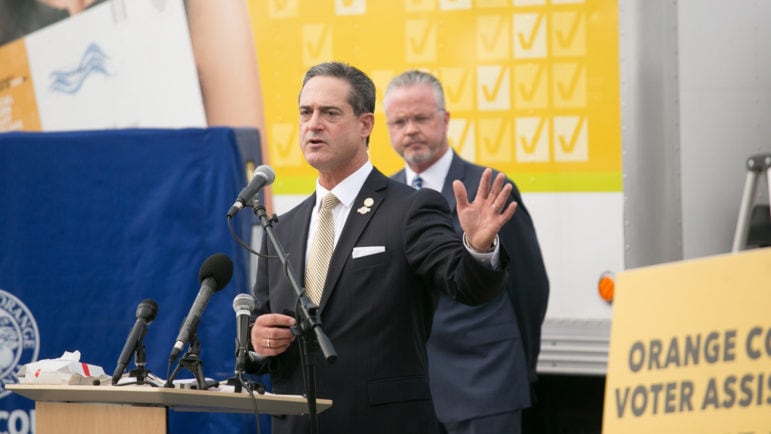 If there’s a question about whether someone can cast a ballot, poll workers are trained that the person will be allowed to vote provisionally and the issue can be taken up later as to whether they’re a valid registered voter, Spitzer added.

And police in Orange County are being trained that if they respond to problems at vote centers, “their job is to keep the peace” and not to make any decisions about who can vote and who can’t, said Spitzer. Those decisions are up to Kelley’s staff, who are the experts, Spitzer said.

What Safeguards Are in Place to Prevent Voter Fraud?

The DA and election officials vowed to be vigilant in keeping an eye out for fraud and following up on any reports of fraud, and have set up hotlines to report suspected wrongdoing around the election.

“[People] need to know that if they are thinking about, or planning to engage in potential mischief, we will be there to enforce the law,” said Spitzer. The DA has set up a vote fraud hotline at 714-501-4593.

What Happens if Someone Tries to Vote Twice?

Any time a ballot is received or someone checks in to vote in person, computer systems are quickly updated to prevent any further ballots from being cast by that voter, Kelley has said.

“That [mail-in] ballot becomes void the minute they check in at an in-person site…it instantly becomes void and cannot be cast,” Kelley said Monday.

Voting twice in the same election is a crime in California and can lead to prosecution, he’s said previously.

If the signatures don’t appear to match, state law requires election officials to notify the voter and give them a chance to confirm the ballot is theirs before it’s left out of the final tally.

When Are In-Person Vote Centers Open?

In-person voting has started at the Orange County Registrar of Voters headquarters in Santa Ana.

The rest of vote centers across Orange County open starting Oct. 30 – the Friday before Election Day – and are open through Election Day, which is Tuesday, Nov. 3. Their hours are 8 a.m. to 8 p.m. up until Election Day, when they open at 7 a.m. and close at 8 p.m.

The official map of vote centers and ballot drop boxes is here.