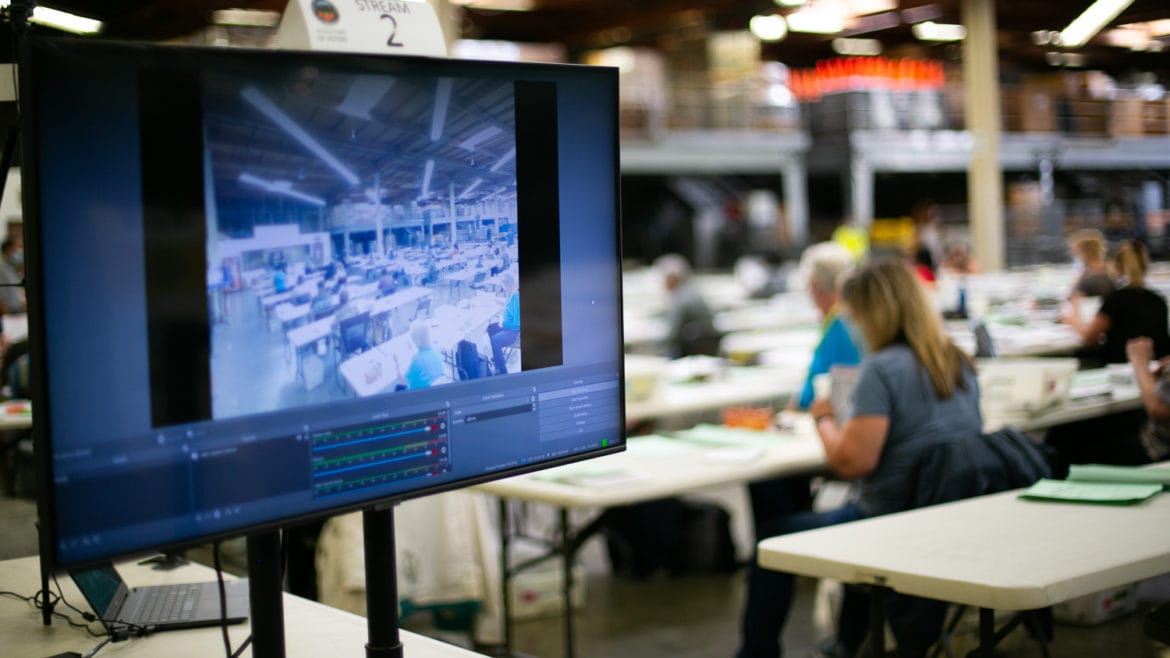 The 2020 Election is officially winding down, with a Friday deadline looming at the Orange County Registrar of Voters office for the receipt of any ballots mailed out on Election Day.

OC Registrar of Voters Neal Kelley told me he expects to be able to certify the election by Tuesday, Nov. 24.

For updated election results in realtime, combining all surrounding counties in relevant congressional and state races, go to our Election Page.

Kelley said there’s about 5,000 outstanding ballots, mostly with signature issues, where officials are contacting voters. About half have been contacted, Kelley said, and the other half have until next Tuesday to verify their ballots.

From a turnout perspective, this year’s election was a tsunami — the most engaged electorate in history.

At about 87 percent, the turnout was only outdone by the 1960 and 1964 election, which was 90 percent but featured a much smaller electorate of about 400,000 compared to today’s registered voter base of 1.7 million.

Despite publicized concerns about potential problems with mail through the U.S. Postal Service or mail-in ballots or drop-off boxes or ballot harvesting, Kelley said the election “went very well, considering the scope and scale of all of this.”

Kelley’s office processed more than 1.6 million votes that were mailed, delivered or dropped off, all under incredible scrutiny. On Election Day, Kelley even saw a crowd of protesters in front of his office following President Donald Trump’s declarations of voter fraud. 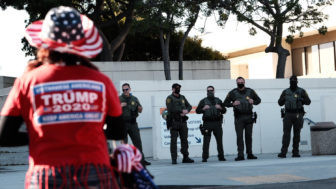 Orange County sheriff’s deputies standing by the Orange County Registrar of Voters building as they observe the protest. Protestors gave thanks to the officers and showed their appreciation for law enforcement through cheers.

In Orange County, despite the unprecedented engagement, there were zero problems around voter fraud, Kelley said.

On top of the stress of the election, Kelley caught Covid in the midst of the campaign season, recovering well ahead of Election Day.

Since Election Day, he’s been locked up in rooms, alongside Republican and Democratic election observers, sorting through questioned signatures on ballots, all while trying to maintain social distancing and masking requirements. 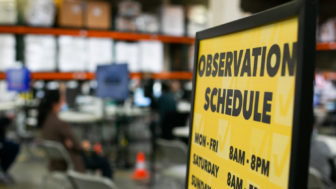 Observation schedule posted at the Registrar of Orange County on Nov. 6, 2020.

So after all the counting was done, what did all these ballots really tell us about Orange County?

Orange County remains a largely Purple region, with a Blueish or Reddish hue depending on what part of the county you’re in.

Yet the lines are more complex than simple geography.

Yes, the center of the county — around Santa Ana and Anaheim — leans much more Democratic than the Republican suburbs.

But the lean in specific precincts isn’t always as much as you’d think.

If you just look at the votes for President in 2020 at the OC Registrar of Voters election results map, many areas indicate a pretty tight contest — even though most election graphics make it look more one-sided at first glance because the final color goes one way (Red) or another (Blue) depending on the winner.

A majority of voters did not like Donald Trump as President, with 53 percent voting for the Democrat, Joe Biden to Trump’s 44 percent.

Yet many Orange County voters across the region still like the Republican brand.

In two key congressional districts, the inland 39th in North County and the coastal 48th around Laguna Beach, Republicans took back two seats they lost back in 2016.

And in Orange County’s central core —  Santa Ana and Little Saigon communities of Westminster and Garden Grove — Republicans kept County Supervisor Andrew Do’s seat in a district where they had a disadvantage in voter registration, beating out Westminster City Councilman Sergio Contreras.

Voice of OC County Reporter Nick Gerda, who followed the race, shared a really interesting insight about voter registration in that district.

When Andrew Do ran in 2016, Democrats had a 17 point advantage in the district’s voter registration:

Just over 102,000 voters were registered as Democrats, while about 63,000 identified as. Republican voters.

Do ended up winning that year by 0.4 percentage points.

Over the next several years, Democrats’ grew their advantage further to nearly 19 points ahead of the March 2020 primary:

But just a few months later, as voting was underway in 2020 general election, Republicans gained in registrations and flipped the previous shift that had been moving towards Democrats.

The OC GOP’s gap narrowed to 16.5 points by having more growth in registered voters than Democrats did.

Thus, between February and October, Republicans gained on Democrats by 2.2 points (shaving a 18.7 point Democratic registration advantage down to 16.5 points).

Contreras is ultimately on track to lose by 3.7 percentage points.

To see the full list of datasets on voter registration go here:

So what could have caused that kind of gap?

In the midst of Little Saigon – right in the middle of the First District – OC Democrats sent a troubling message of public admiration for the ruling regime in Vietnam.

LeTourneau’s post lit a fire in Little Saigon’s Vietnamese community, not only reinforcing the national Republican narrative around Democrats and socialism but putting a local face on it.

People who have lived through the horrors of Communism are very sensitive to the insensitivity of progressive leaders and politicians who ignore the repressive side of regimes in places like Vietnam.

LeTourneau issued an apology and OC Democratic leaders held press conferences denouncing the post and Vietnam’s human rights record, resulting in Letourneau stepping aside from his leadership post as a Vice Chair on the central committee.

But the damage was done.

Seems to me voters delivered a pretty clear statement at the polls.

Contreras took most of Santa Ana by tight margins but lost big to Do in Little Saigon.

The Ho Chi Minh affair was the second rift on the OC Democratic Central Committee this year. In May, Pho reported on the ouster of another senior progressive OC Democratic Vice Chair, Victor Valladares, from Huntington Beach, after he made remarks about Bernie Sanders following the primary.

Given County Supervisor Michelle Steel’s recent win in the 48th Congressional District, both Republicans and Democrats will likely spend the holiday season mulling the upcoming special election early next year to finish out the remainder of Steel’s term for her Second District seat.

Republicans already have a packed field of candidates, led by Moorlach, while Democrats have been mentioning Costa Mesa Mayor Katrina Foley, who just won reelection this month.

The stakes of the election will be big, having a direct impact on the redistricting efforts that will be crafted by the next board of supervisors and govern elections for the next decade.