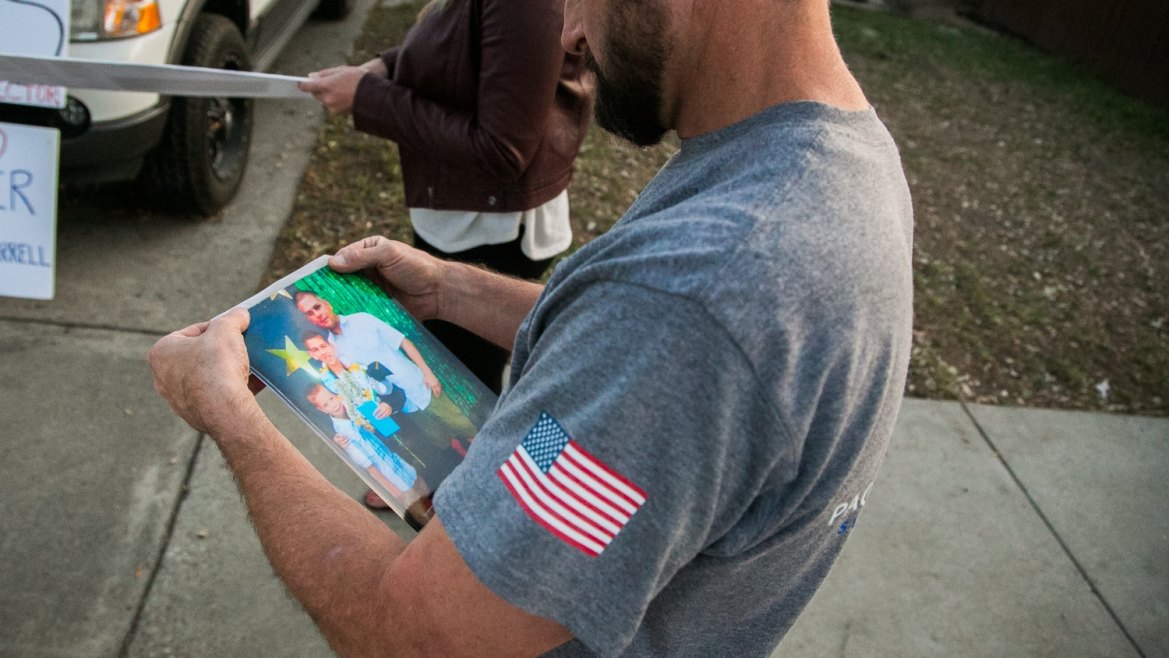 Fullerton resident Bill Brown holds a photo of his friend Hector Hernandez, 34, shot and killed by police on May 27.

There’s a row of homes in west side Fullerton that’s known for its close-knit band of neighbors.

Their kids, those living there say, all know each other.

And holiday lighting decorations this month were a street wide occasion.

But residents on West Avenue say it took the controversial police killing of one man living there to show the city just how united they all really were — most recently at a Saturday demonstration outside the police department calling for accountability over the shooting.

The chain of events began in May, when officers responded to a frantic 15-year-old’s 9-1-1 call about his drunk step father threatening family members and firing off a gun in their house.

Through body-worn camera footage released by police, officers arriving on scene May 27 could be heard shouting orders at Hector Hernandez, 34, as he stood outside his home on the west side of town.

He complied, according to police statements, but started pacing. Then, police set a dog loose on him.

By the time the canine’s handling officer caught up, Hernandez had stabbed the animal with a pocket knife — injuring but not killing it — and Hernandez, a U-Haul employee and father of two kids, was lying on the ground.

Standing above him, the footage shows the officer fired multiple rounds into Hernandez, who later died at a hospital.

Then the department’s public relations team got to work.

Police posted the step son’s 9-1-1 call and body cam footage to YouTube the next month, overlapped by officials’ statements detailing Hernandez’s allegedly violent behavior that night, such as claims he assaulted his girlfriend after a night out and threatened his own son when they got home.

Meanwhile, friends argue Hernandez, despite his behavior, didn’t deserve what they say was a highly unnecessary and brutal death. 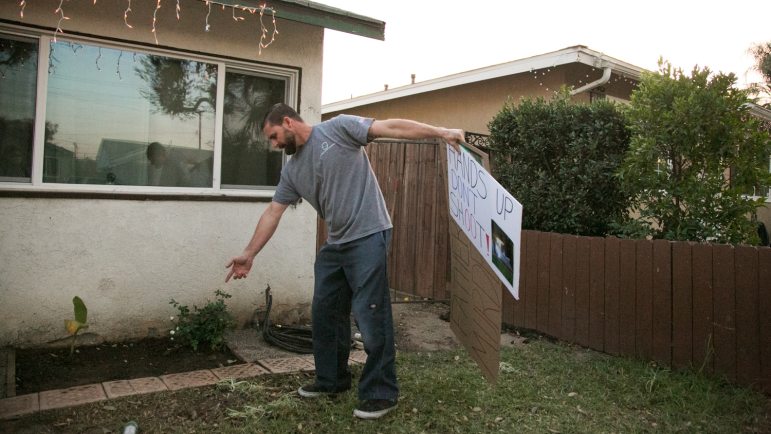 Brown points to the area where Hernandez was shot by police. 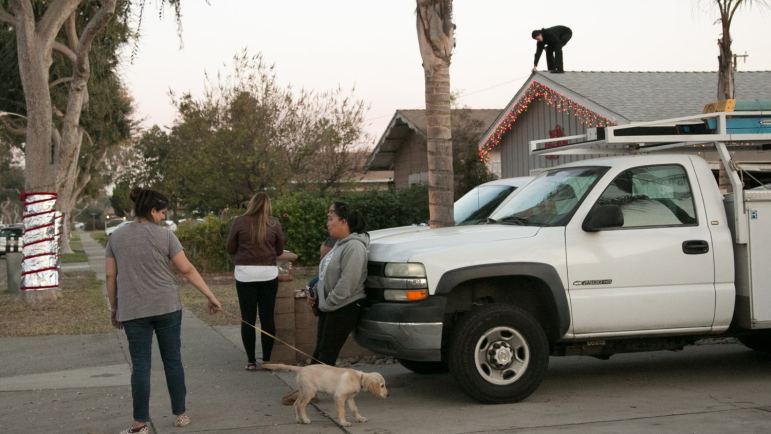 Residents in a close-knit row of homes on Hernandez’s street put up holiday decorations together on Dec. 6.

In turn, a small band of enraged neighbors — some of whom knew Hernandez and watched the events unfold that night — took their anger to the department’s front door on Saturday.

It was a relatively small demonstration, and the latest in a few this year, outside the police station. But the show of rage that day was a special one to those present.

Many protesters were from Hernandez’s street: A close-knit one, now united over the death of a neighbor, said a family friend and Fullerton resident Bill Brown in an interview. He said he never thought he would be out protesting police like this.

“I’m not somebody that wants to come stand out on the corner of the police station,” he said.

“This is something I felt I was just forced to do,” Brown added. “I can’t sit around and watch my family and my kids depressed and sad and just say, ‘Oh, well, we’ll just trust that the police will do what’s right.’”

Donna Chadwick, the mother of Hernandez’s oldest son, called him “someone who was always there for the neighborhood.”

Like Brown, Chadwick also said she never imagined herself at one of these demonstrations.

Protesters call for accountability over Hernandez’s shooting death outside the Fullerton Police Department on Dec. 5.

Hernandez’s killing, and the ensuing outcry, once again is rocking a city no stranger to police violence controversy.

Orange County District Attorney’s office investigators are now looking into the shooting, and civil rights lawyer Garo Mardirossian is representing Hernandez’s family in a lawsuit against the city.

He’s somewhat of a familiar name around town.

Mardirossian also represented the family of Kelly Thomas, a homeless man beaten to death in 2011 by Fullerton police in a case that attracted national attention and a seismic shift at the government level, when residents voted to unseat three sitting council members at the time.

No other recall effort in Orange County has since seen success at that scale.

Mardirossian told Voice of OC the Hernandez killing stirs echoes of the similar tumult that shook the city nearly a decade ago. “In many ways,” he said.

“Letting that dog loose on Mr. Hernandez when Mr. Hernandez followed their orders, their commands, and for a police officer to shoot a man twice when lying on the ground defenseless is a truly unnecessary escalation of force,” Mardirossian said.

The department in its June 29 statement explains Police Cpl. Jon Ferrell’s decision to release the dog:

“Fearing for the 9-year-old’s safety inside the residence, and not wanting to allow Mr. Hernandez, who had committed multiple violent felonies at that point, an opportunity to … continue his assault on his family or barricade himself with vulnerable family members inside, K9 Corporal Ferrell released his K9 partner Rotar to effectuate an arrest.

Police also said there were five kids “of various ages inside the home with Mr. Hernandez and his girlfriend.”

Mardirossian defended Hernandez’s use of his knife, calling the dog’s release “excessive.”

“All the officer had to do was pull that dog away and handcuff Mr. Hernandez and take him in,” he added. “But to shoot him twice was just another unnecessary and violent use of force and death.”

The family is suing for the release of records around the shooting, like Hernandez’s autopsy report and the full body-worn camera footage of the incident, the version of which on YouTube Mardirossian maintains is edited.

Asked about this, Fullerton police corporal and department spokesman Billy Phu said his agency “released all footage to the DA’s Office for investigation that is ongoing” per a new state law around law enforcement transparency, AB 748.

“When we released that debrief video, we included all the audio and video related to the exact incident of the officer-involved shooting. You could imagine there’s quite a bit of time in the complete footage leading up to that incident, including driving time.”

Phu limited his remarks on the controversy around the shooting, saying “that critical incident briefing video is … what we knew at the time it was released, with that said, the officer shooting is still being investigated and we don’t want to make any judgments or draw any conclusions until all the facts are out and the investigations are completed.”

Fullerton resident Vanessa Galvez had been Hernandez’s neighbor for roughly 15 years, she said, adding she would babysit his youngest son and that their kids knew each other and were friends.

“Our street? We’re united. And when that happened that night, we were all there in a split second. We all look out for each other,” she said, calling Hernandez “the type of person where, if I ever needed anything, he was there.”

She said this is the second time she has protested outside the police department over Hernandez’s death.