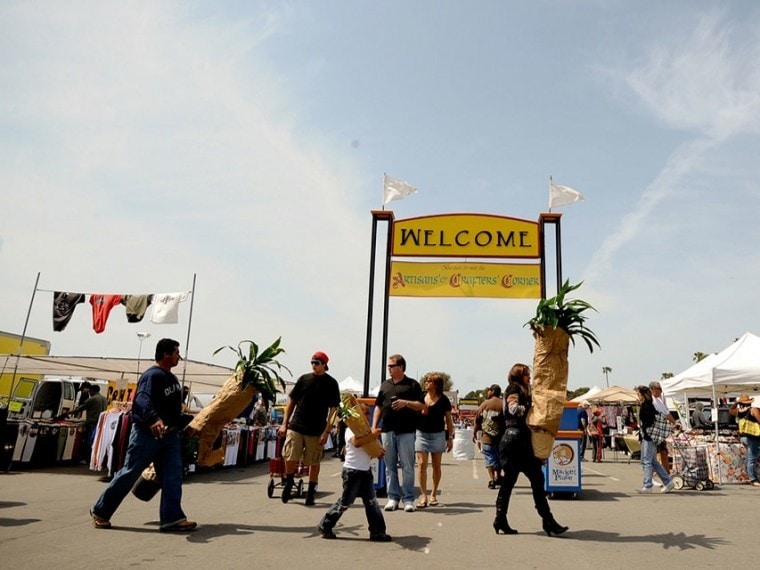 Patrons of the weekend swap meet held on the Orange County fairgrounds in Costa Mesa. Costa Mesa is in negotiations to buy the fairgrounds from the state.

An Orange County Superior Court Judge has temporarily halted the sale of the county Fairgrounds to a private bidder.

The temporary restraining order issued by Judge Frederick P. Horn on Wednesday morning prevents the State Department of General Services from opening escrow this week with a Newport Beach company, Facilities Management West, to sell the 150-acre site in Costa Mesa for $96 million.

“These are rather serious allegations,” Horn said to Michael Glenn Witmer, the deputy state attorney general arguing for DGS.

In the background now is the critical question of when briefings and hearings on the merits of the lawsuit will be considered. State attorneys today in court seemed reticent to agree to a proposed Dec. 22 hearing date saying, “that severely prejudices the state.”

The hearing date is important because it is widely accepted that if Gov. Arnold Schwarzenegger can’t finish the sale by the time his term runs out, then the sale won’t happen. Gov.-elect Jerry Brown doesn’t seem to be interested in a sale.

After consulting in the hallways with DGS officials, Witmer told competing attorneys he would press for a Dec. 8 hearing date unless attorneys for fair vendors would agree to allow the state to open escrow.

Horn seemed convinced that the issues raised by a fair vendor coalition headed by the OC Marketplace swap meet owner Jeff Teller merited review before any sale could be consummated.

Teller’s attorneys have argued that the state set up a sham bidding process because it set up the bid specifications to advantage FMW when its deal with the city of Costa Mesa fell apart.

They have also argued that the sale is unconstitutional, which Witmer disagreed with.

Witmer told fair vendor attorneys that the state and FMW still had critical ongoing negotiations. He also said had a statutory right to a hearing in 15 days.