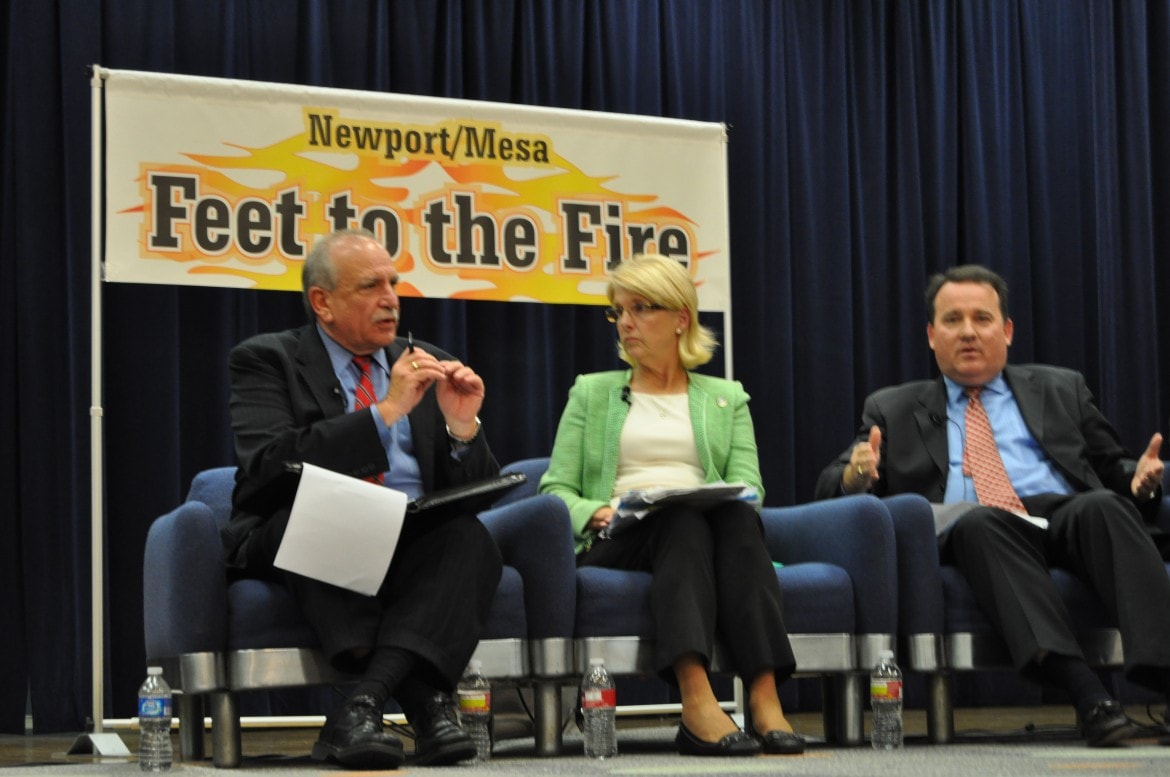 Warring parties in the Costa Mesa outsourcing controversy — the local conflict that has become a flash point in the national debate surrounding government budgets and public employee benefits — were brought together Monday night in a public forum.

The event — called the “Feet to the Fire” forum — was first of its kind since the city issued more than 200 layoff notices to its employees a month ago. The notices were an early step in a long-term plan by the Council to outsource nearly half of its workforce.

Barbara Venezia, an Orange County Register columnist and organizer of the event, started things with a simple question: Should the city of Costa Mesa be run more like a business?

In addition to Venezia’s overarching question, journalists from the Orange County Register, the Daily Pilot, the Newport Independent and Voice of OC, peppered the panelists with many other questions relating to budgets and pensions.

And for the most part, the answers came right out of the respective playbooks.

Righeimer talked about all the sick time — more than two weeks — Costa Mesa city employees can cash out each year if they don’t use it. And he lamented that employee salary and benefits make up more than 80 percent of the city’s budget.

“The public is starting to get it and understand,” Righeimer said. “The numbers are going up so fast that we can’t keep up.”

Berardino described outsourcing as a wolf in sheep’s clothing that will eventually take government from the people and put it in private hands.

“Politicians outsource to gain favor with their political supporters,” Berardino said. “It is done in secret, and in such a way that a few people get rich.”

Leece, meanwhile, hit the same note she’s been hitting since the City Council first unveiled the outsourcing plan earlier this year — that it was done hastily and for ideological reasons.

“Why does Costa Mesa have to be the Petri dish for pension reform?” Leece asked.

McCarthy’s approach was to come up with all sorts of places and situations where, he said, outsourcing has gone well. The city Costa Mesa should aspire to be, according to McCarthy, is a place in Georgia called Sandy Springs, where every service has been outsourced but public safety.

Each panelist, at one point or another, accused another of not being transparent. Berardino, for example, braced Righeimer and other city officials of not providing clear budget numbers or email correspondence about the budget among members of Council.

Righeimer, in turn, accused Berardino of not revealing OCEA’s funding of local groups that are launching campaigns against the City Council.

The crowd, which numbered between 300 and 400 and filled a room in the Costa Mesa Community Center, largely was made up of public employees and supporters of the taxpayers association. And each group did its share of cheering and jeering the panelists.

In the end, no one seemed to budge from the position they walked in with. But despite all the predictability, both participants and audience members said the forum was a good thing, and needed in Costa Mesa.

“My goal was to open a dialogue and get people to come together,” Venezia said. “And I think we did that.”

These sentiments were shared by Bob Knapp and Kirk Bauermeister — two longtime friends who said they came to the forum as Costa Mesa residents, not as partisans.

Knapp is unemployed — laid off in January by Rainbow Magnetics, a local company that he once owned. He said he leans toward the thinking that a city should run more like a business. But he’s lived in Costa Mesa for most of his life and sees the public employees as the face of the city.

Knapp said he could also relate to the shock and fear the employees felt when they walked into work one day and were told that they might be out of a job. “There are no winners,” he said. “Its just what degree are people going to lose.”

Yet he was encouraged by a couple of brief moments during the forum when the two sides seemed to come together and acknowledge, for example, that solutions won’t come unless there is a level of collaboration between the two sides.

As was Bauermeister, who is the principal of Estancia High School in Costa Mesa. And while he feels for the employees, he said he also understands the tough decisions facing city officials — he’s facing them too.

Had they been aware of it, Knapp and Bauermeister would have also been encouraged by a moment shared by Berardino and Righeimer after the show was over.

Although the two have been lobbing bombs at each other over the airwaves and through the Internet, they had never actually met before Monday night. Both described the encounter as “friendly.”