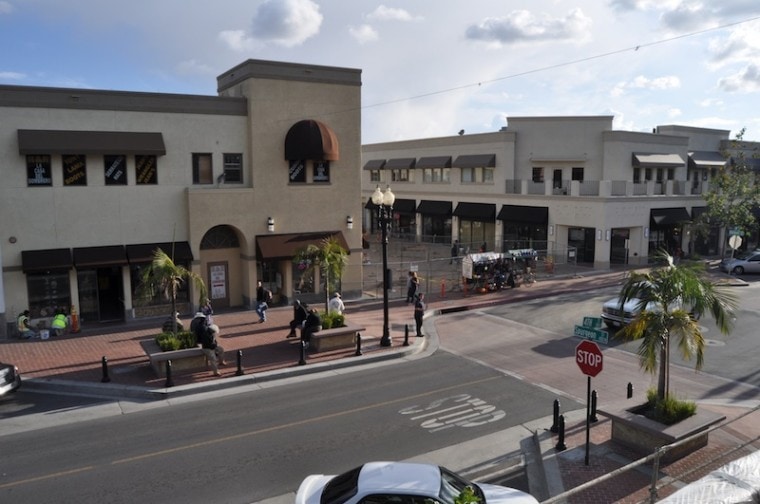 Thursday, April 14, 2011 | Santa Ana’s Fourth Street in the heart of the city’s downtown is known for its medley of Latino-owned shops selling goods like bridal gowns, ranchero style boots and gold jewelry along storefront displays.

But once you get to the blocks between Bush and French streets, the beginnings of change can be seen.

Style World, a women’s clothing shop, has a row of manikins in its display that flaunt higher-end lines of clothing. The attempt, the store manager said, is to look like “Forever 21,” a corporate chain that caters to young women.

A barber shop that looks like it was plucked from a trendy urban district has also popped up. And so has a tattoo and piercing supplies shop along with a new coffee shop. The carousel that harkened memories of childhood for many Santa Ana residents is gone and nearby building facades are starting to take on the look of a South Orange County shopping plaza.

Chase has been actively pushing for gentrification of the area. And he’s using a novel technique that has many merchants concerned.

Chase hasn’t renewed the leases of many of his tenants, and he won’t unless they buy expensive new lines of merchandise.

“I personally have no idea if I’m going to be here next year. I’m very scared,” said one merchant, who did not want their name published. Nearly all the merchants interviewed for this story didn’t want their names published out of fear of retribution from Chase.

Chase and his tenants have a fundamental disagreement about the future of Fourth Street, one that has marked an ongoing debate about efforts to gentrify the area. Chase says the usual Fourth Street customer base — Latino immigrants — is gradually abandoning the Hispanic shopping corridor for places like the Westfield MainPlace mall on North Main Street.

Chase says “every one” of his tenants is on rent relief or a deferred payment schedule, a problem that, he said, none of his tenants had three or four years ago.

“In order for them to stay in business in the current climate, their rents were reduced by two-thirds, some of them even more actually,” Chase said. “When that takes place, as a property owner you have to say to yourself — something is fundamentally wrong.”

He says it’s time for his tenants to broaden their customer appeal to include the children and grand-children of Latino immigrants. The younger Latino generation, Chase said, has similar tastes for the hip and trendy, as young people of any ethnic background do.

Chase said the new model for Fiesta Marketplace is going to be similar to the Artists Village: a day-and-night shopping and entertainment district.

He admits, however, that most of his tenants are unlikely to survive the transition.

“They’re not gonna make it, they’re just not going to make it, because they can’t process it. They can’t fundamentally understand what’s going on,” Chase said.

Merchants, meanwhile, say that Chase’s vision for Fourth Street is going to fail and will only result in driving them out of business.

They say the kind of merchandise Chase is looking for shops to stock appeals mainly to Anglo upper-end customers who just don’t come to Fourth Street. The downturn, they said, has nothing to do with MainPlace mall and everything to do with the Great Recession.

“When the people who lost their jobs three or four years ago get their jobs back, then business will be booming,” said one merchant.

Louis Pescarmona, a former Fourth Street merchant, closed his Guadalajara Jewelry shop in September because of the pressure.

Although Pescarmona wouldn’t speak about Chase directly, he said couldn’t get a renewal on his five-year lease and was instead renting month-by-month. Yet he believes that if he had bought a line of merchandise that would have appealed to an upper-end Anglo crowd, he would have gotten a lease renewal.

Pescarmona said he couldn’t afford to invest thousands of dollars for what he said would be a failed bid to appeal to a different customer base.

The problem with the gentrification, Pescarmona said, is that Anglo customers won’t feel comfortable on Fourth Street because the area is mostly Latino.

“It would be like an island — that’s what it would be — for two or three miles everybody around downtown is Hispanic. It doesn’t make any sense,” Pescarmona said.

Another merchant added: “I think the tenants — the merchants — know more about the customer base than Irv does.”

Merchants have been feeling the pressure to change from others as well.

Last week, Fourth Street merchants attended a meeting sponsored by the Orange County Small Business Development Center. At the meeting, they were given tips on how to spruce up their stores.

Elisabeth Pechs, a business consultant with the development center, said she chose Fourth Street as a target area because she recognized the merchants there needed help.

Pechs said she had 28 year-old Tara Jimenez, owner of Drapes Vintage clothing store in the Artists’ Village, attend the meeting and offer up tips that Jimenez learned while working at Bebe, another corporate clothing chain.

“If they can continue selling to the Hispanic community and make a lot of money — and make money for them to survive — I don’t think that’s the question,” Pechs said. The question, she said, is “what needs to change with the new conditions?”

But merchants say that corporate style of running a store simply can’t be transplanted onto Fourth Street because of the nature of their Latino customers.

For example, their customers, one merchant said, like to bargain — they won’t tolerate the kind of set prices you see in a corporate store.

Chase, meanwhile, doesn’t buy the argument that the slump in sales at Fiesta Marketplace can be totally attributed to the economic situation and that customers will return.

“Absolutely not true, I think there will be a return of some of them, but nothing like it was before,” Chase said.

He points to the success of the coffee shop, the barber shop and the tattoo and piercing supplies shop as evidence that there is a “fundamental shift in retailing.”

Merchants also are critical of city officials because, they said, the city has awarded Fiesta Marketplace Partners with redevelopment money without making their redevelopment plans more amenable or accountable to the community.

Fiesta Marketplace Partners has awarded a total of $765,000 under a facade improvement rebate program.

Chase said $165,000 of that was loaned to Ray Rangel, a smaller property owner in the partnership.

One merchant noted that while Chase was awarded money to carry out his vision, the merchants have received little financial assistance to restock their merchandise.

“In answer to the question that the city gave me money — well, I gave them [the merchants] money” by reducing their rents, Chase said. “They’ve already gotten enough from me. In all honesty most of them should have gone out of business two years ago.”

Merchants who haven’t gotten lease renewals are also asking — where do City Council members weigh in on this situation? “They haven’t lifted a finger to help,” one merchant said. “They don’t come and talk to us,” added another.

Yet two council members who did discuss the changes noted how difficult the issue can be.

Councilman Sal Tinajero said this was the first time he had heard that Chase wasn’t renewing tenants’ leases but said he “can’t support something like that.”

Tinajero doesn’t like the fact that Chase himself is instituting a new vision for the area. A vision for downtown needs to come from the leadership of the city, Tinajero said.

He also sides with the merchants on their argument that the customer base is still there and that what merchants are experiencing is mostly a temporary downturn in the economy.

“Everyone’s been hit by the economy, so it’s very easy to make an argument that something doesn’t work anymore,” Tinajero said. “But what about when the economy was not down? WalMart still existed. Target still existed. People were still going to Fourth Street.”

Councilwoman Michele Martinez also said she doesn’t like the fact that Chase is holding back leases. “I don’t think that that’s appropriate,” Martinez said.

But Martinez is a strong supporter of bringing in a younger crowd. There is a large, under served group of younger residents in the city, Martinez said, and she supports bringing in trendier spots that appeal to them.

“When are we going to start servicing the majority population in Santa Ana?” Martinez said.