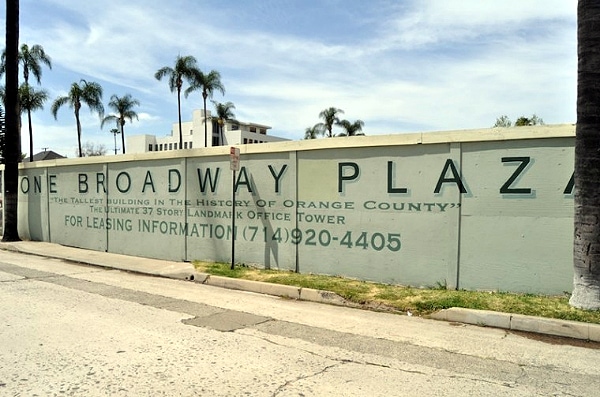 The California Supreme Court has declined to hear an activist group’s lawsuit to block construction of One Broadway Plaza, a planned 37-story office tower near downtown Santa Ana.

The Coalition for Accountable Government Ethics (CAGE) had sued to stop developer Mile Harrah from proceeding with the project, arguing that the Santa Ana City Council illegally removed a condition that Harrah lease 50 percent of the building before beginning construction.

The activists argued that because the building was approved in a 2005 referendum, any change to the development agreement must also be placed before the voters.

“We put up a good fight, and we let the city know that the citizens are serious. We don’t just have a bark, we have a bite,” said Jeff Dickman, a member of CAGE.

Harrah said the court’s decision not to hear the case was “only right and fair.”

“Alls we’re trying to do is good things — put 2,900 people to work in a down economy, make the county strong, and the city, and do good stuff in the Lord’s name,” Harrah said.

Last year, Superior Court Judge Derek Hunt ruled in favor of the activists and ordered the project to again be placed before the voters. Hunt agreed with attorney Dan Wildish’s argument that voters believed they were voting on the whole project and not just the zone change, which is what the city argued.

But the 4th District Court of Appeal reversed Hunt’s decision in December.

While the legal obstacles have been cleared, Harrah may still be facing other challenges. There are still questions about whether he has the resources to actually build the project.

Harrah had requested an extension for  permits based on a prior year’s building codes. He wrote in a letter to Trevino obtained by Voice of OC that not obtaining the permits in December would postpone the construction start date to November or December 2012. The letter also detailed millions of dollars in new costs attributed to the newer building codes.

“We (Not just the One Broadway Plaza project but the entire O.C. community) would just lose so much valuable time in going backwards and with so many people out of work on a shovel ready project with funding in place,” Harrah wrote.

But Harrah now insists that his company has spent the last two months updating the project to conform to the new codes. He also says that financing is not an issue because a loan had enabled him to pay the approximately $14.1 million in various fees and costs required at the start of construction.

“We don’t need financing for those [costs]. It is in our loan agreement,” Harrah said. He declined to identify the source of the loan.

Harrah also says he has an anchor tenant, a major American corporation that will fill up 75 percent of the building.  Caribou will be able to break ground by June or July, he said.

Yet Harrah’s predictions regarding this project have often been proven wrong. He told the Orange County Business Journal’s Rick Reiff last year that he would break ground by fall. And earlier this year, Harrah told the Register’s Andrew Galvin that he would begin construction in April.

“The funny thing is he must not have had the anchor tenant before the end of the year, because if you had a signed contract you could take that to the bank,” Dickman said. “It tells me that he himself is struggling to get this thing on track and keep it on track.”

Harrah, meanwhile, says the community should get behind his project.

“I hope the other people that live around there that weren’t sure of the project or whatever will see the benefits down the road, the increase in their property values and all the good that it’s doing,” Harrah said. “I’m praying that they will see the good things it’s doing for the community and the people.”