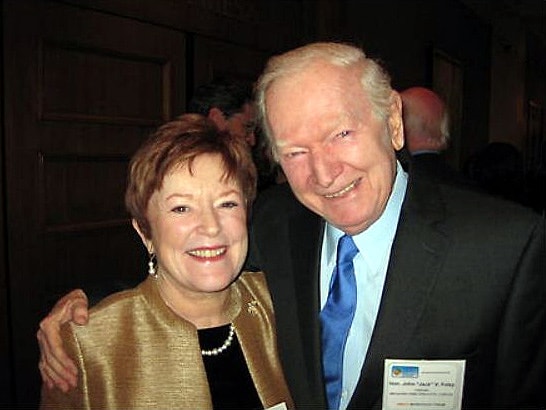 The chairman of Southern California’s largest water agency voted to award more than $9 million in contracts and contract increases to two engineering firms that paid his wife more than $20,000 for consulting work in the years leading up to the votes, according to meeting minutes and financial disclosures reviewed by Voice of OC.

John Foley, who has been a director at the Metropolitan Water District of Southern California (MWD) since 1989, cast the votes between 2007 and 2010, the records show. The district provides water for nearly 19 million Southern California residents across six counties, including Orange County.

Foley claimed in a brief statement last week that he and his wife have a prenuptial agreement separating their property, which would mean that his votes were not in violation of the state’s conflict of interest laws. Yet Foley filled out his recent financial disclosures as if he had a legal share of her income, raising questions regarding his votes.

He has also issued conflicting statements about the prenuptial agreement and has yet to produce it. And regardless of the agreement’s existence, the votes still raise ethical concerns among good government experts.

“This seems about as clear a conflict of interest as you can get,” said Tracy Westen, chief executive officer of the Center for Governmental Studies.

And Foley himself says he now realizes that “it would have been better to have abstained on those votes.”

Foley’s wife, Mary Jane Foley, is a regulatory consultant who advises government agencies and private companies in the water business.

John Foley’s most updated financial disclosures indicate that he had a proportional or “pro rata” share in his wife’s income, which contradicts his statement last week that their property is legally separate. Without the prenuptial agreement, half of Mary Jane Foley’s earnings would be considered income to her husband, since property is split equally between spouses under state law.

“The first rule of ethical behavior for public officials is not to vote on matters that benefit them financially,” Westen said.

“Here the public is entitled to question whether this official cast his vote on the merits of the engineering contracts or whether it was influenced by a desire to increase the importance of his wife’s consultancy to the private company.”

The questions regarding the contract votes follow revelations by the Surf City Voice website that John Foley failed to disclose hundreds of thousands of dollars in consulting income that his wife received from the engineering firms, government agencies and other businesses. The Voice of OC review showed that the undisclosed amount was at least $640,000 in pro rata income to John Foley.

State law requires that most high-ranking public officials submit an accurate and complete financial interest disclosure, officially called a Form 700, each year. The officials must provide information about investments, property, income, gifts, and other financial interests that fall within the jurisdiction of their agency.

Officials are also generally required to abstain from voting on contracts with businesses that were a source of more than $500 in income to them in the 12 months preceding the decision, if the vote would have “any reasonably foreseeable financial effect” on the business, according to the California Fair Political Practices Commission or FPPC.

When John Foley voted to approve a $6-million contract with MWH Americas Inc. in August 2010, the firm was the source of at least $10,000 in yearly income to his wife from 2007 through 2009, according to his revised disclosures.

Another vote to approve a $2.2-million contract increase with Psomas Engineering in October 2007 came amid at least $40,000 in payments to his wife from the firm between 2004 and 2007, the filings show.

And when in 2008 Foley voted for a contract and contract increase to MWH worth almost $1.1 million, his wife had received at least $10,000 in income from the company the year before and would receive more than $10,000 that same year and the year after, according to the records.

It’s unclear from these records alone whether John Foley’s share of income went above $500 in the year before each vote. But the records do show that the income was received either in the calendar year of and year before a vote on that company’s contract, or the three calendar years immediately preceding the vote.

John Foley wrote in an email last week that his understanding was that a prenuptial agreement separating his wife’s property from his meant that he could vote on the contracts.

But in addition to the contradictory information in his Form 700s, Foley recently told Earl that he didn’t have such an agreement, Earl said.

For months, Earl had been asking Foley about the missing income, and in a Feb. 8 interview, the editor said he asked Foley “directly if he had a nuptial agreement.”

Foley has not disputed Earl’s account of the conversation. Additionally, Foley filled out his revised Form 700s as if the agreement didn’t exist. In his statement last week, Foley said it would have been preferable to recuse himself from voting.

“While my vote was not critical to the passage of certain Metropolitan contracts with firms that Mary Jane was working with, I now realize it would have been better to have abstained on those votes and will certainly do so in the future,” he said.

Foley did not respond to a follow-up message seeking additional information about the prenuptial agreement.

Bob Muir, a spokesman for MWD, indicated that while the water district offers training and advice, it is ultimately not responsible for ensuring that conflicts don’t occur.

“Conflicts of interest are the responsibility of individuals and directors and not the agency,” said Muir.

Regarding the previously undisclosed income, Muir confirmed that Foley corrected the filings last fall and said he believed the omissions were a misunderstanding on Foley’s part. “That has been corrected,” said Muir. “His 700 forms have been revised.”

Metropolitan does regular ethics training and maintains an ethics office to which directors have constant access should they need advice, Muir said. He added that the agency’s records show then-Director Foley as present at a February 2006 ethics meeting in which disclosure of a spouse’s income was discussed.

Additionally, Foley didn’t amend his forms until soon after Earl questioned him about the missing income in September, according to reporting by the Surf City Voice. The following month, Foley filed a set of revised disclosures listing the income.

Westen, the good-government expert, said that while the amended disclosure “is certainly a step in the right direction … it certainly doesn’t correct the fact that it wasn’t disclosed in the past.”

Violations of the Political Reform Act, which governs the disclosure form, can bring fines of up to $5,000 for each instance. When an official corrects a past form by filing an amended disclosure, it “may be used as a mitigating factor in an enforcement case,” according to the FPPC.

Another conflict-of-interest expert, Bob Stern, said that Mary Jane Foley’s work in the water industry made it all the more important that her husband list the income and that the situation raises a question: Did Foley seek advice before voting on contracts to firms that are a source of income to his wife?

The district’s spokesman said he wasn’t sure of the guidance that had been provided. Any advice would have been confidential, he said

As for the conflicts of interest, Westen says they lead to legitimate questions over whether officials are upholding their responsibilities to the public.

“We know that decisions of public officials affect millions of dollars to private companies,” he said. “At a minimum, we expect that those decisions be made on the merits and in the public’s best interests, not to increase the income of the public official casting the vote.”

Aside from the questions of legality in Foley’s situation, “the appearance of a conflict of interest is still fairly blatant, in my view,” added Westen.