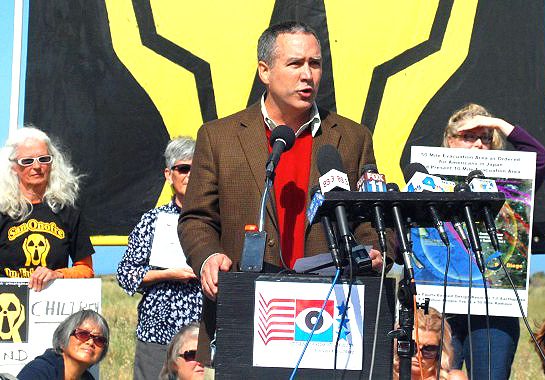 After touring the San Onofre nuclear power plant with federal lawmakers Friday, the nation’s top nuclear regulator vowed complete accounting and accountability for why a key radiation barrier at the facility degraded far more quickly than expected and caused a minor radioactive leak earlier this year.

San Onofre’s two reactors have been idle since January, when excessive wear to generator tubes in Unit 3 caused a rupture and a minor radioactive leak. A small amount of radiation escaped into the atmosphere but presented no health risk to workers or the public, officials say.

After visiting the plant, Nuclear Regulatory Commission Chairman Gregory Jaczko described the rapid deterioration of San Onofre’s generator tubes as “a very unique phenomenon” and said his agency will ensure the plant is safe before allowing it to operate again.

“The NRC wants to get to the bottom of why [San Onofre] is having trouble with relatively new steam generators,” said Jaczko.

“In the end, we will hold the licensee ultimately accountable for actions of the vendor,” he added later, referring to design changes that were made to the tubing.

Jaczko declined to comment on the cause of the rupture or estimate when the investigation would be completed.

Meanwhile, anti-nuclear activists continued to raise concerns Friday about the plant’s safety culture, the reliability of information provided by the plant’s operator and the willingness of federal regulators to hold the owner and operator, Southern California Edison, accountable for safety issues.

They insisted that regulators allow an independent analysis of why tubes wore down at such a rapid pace.

“We cannot trust these people,” said Ray Lutz, national coordinator of Citizens’ Oversight. “They can’t even keep the batteries hooked up,” he added, referring to a recent four-year period when a battery for backup safety systems was disconnected. The NRC found that poor maintenance was to blame, according to the Los Angeles Times.

Among the nation’s 104 nuclear reactors. San Onofre has had the highest number of safety complaints to federal regulators in the past five years, according to NRC statistics.

Dricks instead emphasized recent improvements in the plant’s safety record.

“San Onofre has an unusually high number of allegations brought to us by workers,” though “it’s not as high as it once was,” said Dricks.

Edison also acknowledges past safety problems but says the situation has improved.

“There were some safety culture issues,” though the plant has also seen “tremendous improvement,” said Edison spokeswoman Jennifer Manfre.

The activists also accused the news media — in particular television news — of slanting its coverage in favor of Edison and minimizing concerns about the plant due to the utility’s spending on advertisements.

Jaczko toured the plant Friday with U.S. Sen. Dianne Feinstein (D-Calif.) and Rep. Darrell Issa (R-Vista), amid a recent surge of concern from environmentalists and several local officials about the tube break.

At a recent Irvine City Council discussion on the issue, City Councilman Larry Agran called for San Onofre to be shut down. No council member expressed support for the plant’s continued operation.

The environmentalists’ concerns were also bolstered last week by a report from nuclear expert Arnie Gundersen. He concluded that when Edison installed new generators, it made major changes to the tubing but misrepresented the new generators to the NRC as a ”like-for-like” replacement to avoid a thorough review by regulators. The changes are the likely cause of the rupture, Gundersen wrote.

Both Edison and the NRC, however, say the Edison notified regulators about the design changes before approval was given for the new generator.

“We notified them of all changes,” said Manfre, who said she couldn’t immediately provide details of the timing.

The NRC sees no intent by Edison to mislead it, Dricks said.

He declined to say what consequences would result if a nuclear plant operator provides incorrect information to regulators about major design changes to a steam generator.

“We depend on our licensees to provide complete and accurate information to any significant design change that they’re making to the plant,” he said. “There would be consequences if they didn’t, but that does not appear to be the case.”