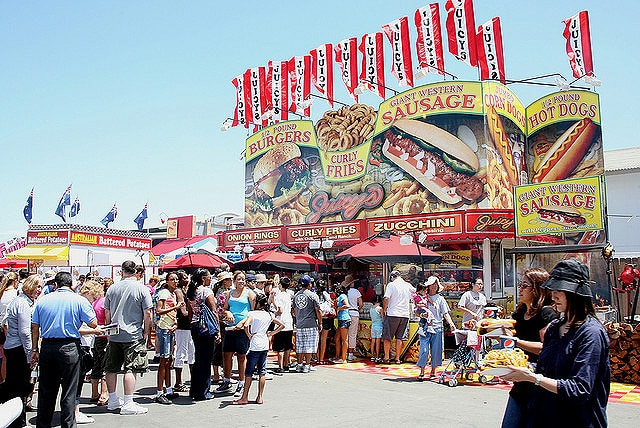 With the start of the annual Orange County Fair just two weeks away, fairground officials are busy gearing up for the month-long event, which generates 80 percent of the fairground’s annual income.

Fair Board members on Thursday received an update from staff detailing a host of innovative measures aimed at spurring communitywide participation and spending.

Given the harsh nature of the recent economy, board members made a point to update the public on free promotions this year.

“There are many families that are struggling out there, and we want to make sure they have a chance to come to the fair,” said Michele Richards, chief business development officer of the OC Fair and Event Center.

On opening day, July 13, admission will be free from noon to 1 p.m. All military veterans will get in free for the duration of the fair. And on every Wednesday free admission will be granted for people bringing in food, clothes and children’s books. Early risers on the weekend also will get discounted entry at $2.

Board members are particularly enthused about their partnership with the Orange County Transportation Authority. Round-trip bus rides to the fair will be bundled with admission for a total of $5.

Fair Board member Gerardo Mouet called the OCTA partnership a “fantastic program. Even people that have cars should consider it, not only for parking but it’s the environmentally cool thing to do.”

Over the fair’s 23 days, $24.5 million will be earned, which is about 80 percent of fairground revenue, Augenstein said.

More than $12 million will be spent on carnival rides and games and another $23 million on food and beverage at 145 concession stands.

To support that effort, about 1,150 people will be hired as seasonal workers and will collectively earn about $2.3 million, with average hourly earnings of $11.

Overall, officials expect about 1.4 million attendees with as many as 80,000 people projected to attend the fairground daily. More than 200,000 people will attend events at the Pacific Amphitheatre.

Corporate sponsorships are also up 20 percent this year over last, with sponsors such as Toyota, Budweiser, Bud Light, Ralphs, Time Warner and Southern California Edison boosting earnings from those deals to more than $2 million.