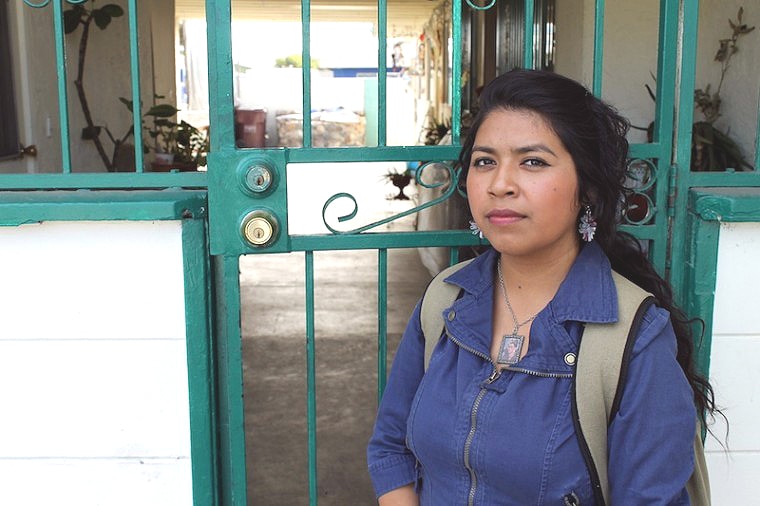 This is part two of a three-part series on housing insecurity in Orange County. Click to read parts one and three.

I have seen my parents’ struggles throughout my 18 years of living, the countless worries about maintaining our family’s economic stability and a safe comfortable home we can rely on.

Our family of five has struggled just like any other low-income family in Orange County, experiencing firsthand a range of living situations, from one bedroom in a house to a garage. I have lived in at least six homes, moving every two to three years in response to crime, fear of immigration authorities, rent increases or foreclosure.

When I was 6, my parents were renting one bedroom in a house of seven people in Garden Grove. I shared a twin bed with my 3-year-old brother. My mother and father slept on another twin bed. We had gotten used to sharing the bathroom with other families. On school days, I would wake up as early as 5 a.m. to wait in line for the bathroom, since many grown men in the household were heading to work at 6.

Most of my playtime was spent in our small, narrow room, and I could not go to the kitchen or living space because the family from whom we rented would be having their own family time. My mother always had to check when the kitchen was available. At times, when we couldn’t get access to the kitchen, we would eat microwaved food inside our room.

My brother and I spent time reading and watching TV after homework, and my mother would take us to the local playground to play or the local library. We lived within minutes of an elementary school and park with some drug dealing going on. It also became clear that the family we were living with may have had criminal connections. My dad changed the locks on the room, and one morning he noticed that his car stereo was missing. After that incident my dad decided it was time to move.

When I was in third grade, we moved down to an apartment in Garden Grove where we lasted only about 3 years due to the rising cost of rent and raids by immigration officials. One night, police knocked on our door. It was past midnight, and they were looking for a person with an arrest warrant.

At around the same time, my parents heard about Immigrations and Customs Enforcement agents in the neighborhood. They feared ICE would someday knock on our door and separate our family. It was because of this fear that my family moved to Santa Ana into a one-bedroom apartment. My brothers and I slept in the bedroom room, which was crowded with boxes of clothing, and my parents slept in the living room.

In 2007, my family came close to owning a home, but it turned out that the effort to recruit my parents as homeowners was deceptive and would have buried them in debt. A realty group that targeted first-time Hispanic home buyers was renting space at a local grocery shop on the border of Santa Ana and Costa Mesa. Eager to be homeowners, my parents signed up. But a deep gut feeling in me kept punching through my heart.

I kept questioning the way the workers made the home buying process seem so paperless and fast. Within two weeks the paperwork was already in the works, and my parents saw themselves as two signatures away from their American Dream becoming a reality. However, when it came time to finalize the deal, my father’s boss accompanied us and became alarmed after reading the contract. He said the deal was highly disadvantageous to my parents.

When I asked for the realtor’s credentials, the situation became even more tense and we soon parted ways. I felt disappointed but relieved to avoid an economic nightmare. At that time, I felt bad about not being able to do enough to help my parents, but I was only in middle school. My biggest concern should have been my math homework and what courses to take for the seventh grade.

The following year, my parents tried again and successfully bought a condo in Santa Ana with two bedrooms and two baths. It was a place where my two brothers and I had a room with no crowded furniture, boxes or space limits. But after six months my father became very ill and in the month that he was ill, my parents couldn’t make the mortgage payment.

My parents fought to keep paying the mortgage, but the bank did not want to deal with the situation, and my parents lost the condominium. The property was sold to another person, and we were in luck that the person who purchased the property let my parents stay and pay rent.

But we changed residences again a couple years later after ICE knocked on a neighbor’s door. We moved to a one-bedroom, one-bathroom apartment with my brothers and me in the bedroom and my parents in the living room.

Now in 2012, our family of six lives in a small, one-bedroom apartment in Santa Ana near Jackson Street. In July an auction notice was posted on our building saying that the property would be sold later in the month.

My parents and our neighbors feared they would be paying someone who was not the rightful owner, so they withheld the rent. After a month, we received a three-day warning and then an eviction notice, and we had to go to court on Sept. 27 to explain why the rent hadn’t been paid.

I as the older daughter once more took this responsibility upon myself. I would spend nights stressed, not knowing whether we might be evicted anytime of the day. Simply, if my parents knew their basic tenant rights and responsibilities in Orange County, then we would not be losing sleep.

A couple weeks after the eviction notice, the community organization Kid Works hosted a free legal clinic. We learned that the auction notice that started the whole mess was an invalid reason for a tenant to withhold rent. As long as the current property was under the owner’s name, despite the risk of turnover at any moment, the rent was still due to the original owner.

We went to court with no legal representation, and I accompanied my father as his translator. We waited for our turn, and we were taken outside to talk with the property owners’ lawyer. He asked what we were going to do and if we would rather settle here and fill the form to have the judge sign for approval.

The lawyer told my father that the property owner would continue to let our family rent the space if we decided to settle. My father said that all he wanted was for the situation to be over, and he already knew that it would be hard to find an apartment at the price that he was paying.

My father did not want for us — now a family of six including a 1-year-old baby — to have to return to sharing a one-bedroom with others. My father had to settle to pay that day before 5 p.m. — $2,050 that was owed from two months, including late fees and added amount for court fees. I communicated with the lawyer about how this was easily avoidable if his client informed us about the status of the property.

We communicated with the lawyer that from now on every rent payment would be made with a money order to avoid any future problems if we ever had to show evidence that we were making payments. After settling with the lawyer, the property owner and his wife told my father that this misunderstanding would be behind them.

Living through different housing situations, I have learned that in critical times, knowing one’s basics rights as a tenant or homeowner is crucial. Regardless of one’s language or other barrier, everyone is entitled to fight for his or her rights.

My family’s struggles opened my mind to take a closer look at what a tenant is entitled to under basic housing law. I know that my parents might feel like they are far off the map from their American Dream home, but I am determined and know in my heart that I will make that American Dream of theirs a reality someday.

Marilynn Montano is a member of Voice of OC’s Youth Media Program.