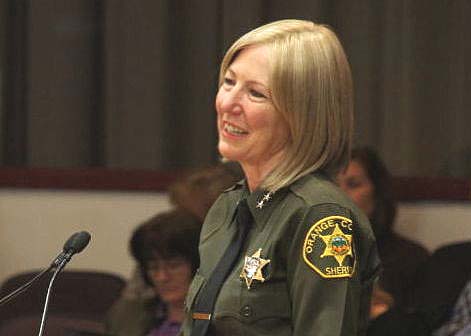 In the midst of the state transferring thousands of prisoners to county jails, Orange County officials are rapidly revamping their approach to dealing with convicted criminals.

To avoid running out of bed space, the Orange County Sheriff’s Department has been trying to prevent nonviolent offenders from returning by offering drug abuse classes, GED training, counseling and support after they leave jail.

“We find we do all those great things in custody and then we release them into the community with no net,” Sheriff Sandra Hutchens told county supervisors during an update Tuesday.

“We’ve gone from doing zero, really,” as a state, giving released inmates $100 but “no job and no support network and wondering why they reoffend,” Hutchens said.

Hutchens also said programs for drug addicts can be more cost-effective than jail and called on local universities to help with research.

“We need the academic community to look at this, and really, we need to look at what works — programming that works,” said Hutchens.

Gov. Jerry Brown’s move in October 2011 to shift thousands of state prisoners to county jails has had numerous impacts on local communities.

Chief among them is how counties manage their inmate population so they don’t run out of room. “Every day they are juggling inmates and trying to find bed space,” Hutchens said.

Those numbers are forcing a shift in approach. Officials are trying a more holistic approach to convicts in the hope that they don’t re-offend.

“We really need to ramp up that focus on what works,” said Supervisor Pat Bates.

Sheriff Hutchens criticized the state for largely leaving counties on their own to sort through which programs work best. “There wasn’t a lot of time put into what programs were best to reduce recidivism,” she said.

Prisoner realignment under AB 109 has also come with plenty of controversy.

As more of the responsibility for housing prisoners shifts to counties, some law enforcement leaders are ringing alarm bells, arguing that public safety is being threatened.

A recent report by the Orange County Chiefs of Police and Sheriff’s Association linked realignment to a 9-percent increase in crime rates countywide.

Hutchens, however, took issue with those findings.

“The reality is no one can point to AB 109 and say our property crimes are going up because of AB 109,” Hutchens said. Crime rates started rising before the prisoners were shifted, she said. “It could be a factor, but we don’t really have the data to show it is.”

Supervisor Todd Spitzer also cast doubt on the report. “I feel like these comments that are being exchanged in the media have the potential to inflame our constituency,” said Spitzer.

Supervisor John Moorlach added, “It appears that these same trends are happening in other states.”

Among the effects of realignment is an increase to the county’s healthcare costs for inmates.

Persuading a Democrat-controlled Sacramento to support conservative Orange County on this issue, however, could prove difficult.

Another potential impact could be to the county’s contract with U.S. Immigration and Customs Enforcement to house immigration detainees. The contract could be at risk if the U.S. Supreme Court requires another 10,000 state prisoners to be released, Hutchens warned.

“Are you ready for another 800 or 900 individuals to come [to Orange County]?” Hutchens asked supervisors. “That would cause us to decrease the ICE numbers, absolutely,” she added. “It’s going to cost the county more money, so that’s not going to be a good thing.”

And because of limited space and an expected influx of potential arrests over the upcoming Memorial Day weekend, the sheriff said her department will likely ask police departments to hold detainees in local jails this weekend.

As a result of realignment, about 30,000 state prisoners were transferred to county jails across California, Hutchens said. At this point, about 1,000 of those state prisoners remain in Orange County jails out of around 6,700 to 6,800 total inmates under county lockup, she said.

Hutchens added that many state prisoners are under protective custody and must be kept separate, meaning that not all of the county’s 7,157 jail beds can be filled.