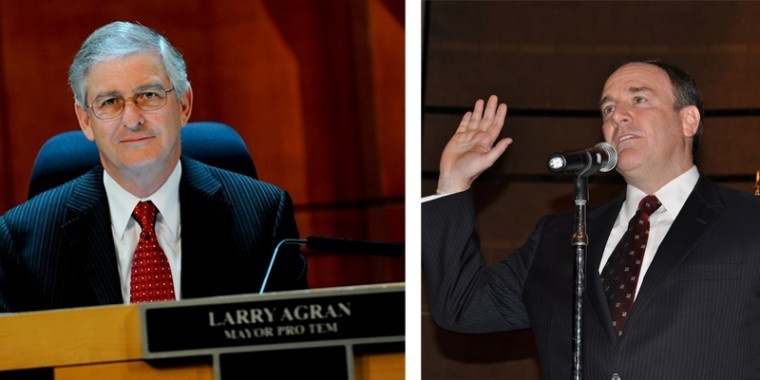 The council voted unanimously to approve a letter supporting the plan in an effort to shore up the 16 board votes at the Orange County Fire Authority needed to ratify the proposed rebate deal. That Fire Authority vote is scheduled for Thursday.

The vote came after Councilman Larry Agran and two other council members threatened to immediately remove Lalloway as the city’s representative to the Fire Authority.

“Frankly, when this comes up before the Fire Authority board on Thursday, I want the city of Irvine to be in the lead championing board approval garnering the two-thirds vote necessary to make this outstanding agreement, in my view, a reality,” said Agran.

The rebate plan represents a big revenue boost to the city but is still only a fraction of what it is overpaying for fire protection.

Under the plan, Irvine would receive an estimated $134 million in total rebates through 2030. Despite the rebates, however, the city would still be overpaying by $341 million over the same period, according to Irvine officials.

Lalloway said the city should be getting a much better deal.

“I’m concerned that our citizens may be taken for a ride by OCFA [the fire authority], in the sense that they’re not being treated fairly,” said Lalloway. “That money needs to be returned to those of us in the city of Irvine that are overpaying for our fire services.”

Nonetheless, faced with the threat of removal from the board, Lalloway vowed to represent the council majority in urging other Fire Authority member cities to vote for the rebate deal. But he didn’t pass up a chance to call out Agran on how he handled the situation.

“Councilman Agran, all you had to do was call me and ask what I’d be willing to do,” said Lalloway. “And I would hope in the future we could act a little bit more respectfully towards each other instead of trying to score some cheap political points or trying to embarrass me.

“I would have respected you enough to have picked up the phone and call you. But I guess I didn’t get that kind of respect,” said Lalloway.

Councilwoman Beth Krom fired back at Lalloway, taking issue with a vote he cast in Fire Authority committee against the wishes of Irvine’s council majority.

“If we want to be respectful of one another, then it seems to me that our representative on the Fire Authority board … when the council has taken an explicit vote in support of a proposal would have an obligation to reflect that vote. And that didn’t happen,” said Krom.

Agran said he was happy that the Fire Authority was willing to improve on its “final offer” by giving Irvine the money upfront instead of having phased over years, thus generating an added $11 million at the outset.

Lalloway, however, said that he questions whether the Fire Authority had been misleading about its “final offer” and that Irvine could get a better deal.

“I believed that OCFA was negotiating with the city of Irvine and with my staff and with me in good faith. I’m not sure that they were, frankly.”

Krom took issue with his questioning of the Fire Authority’s integrity.

Irvine property owners have been greatly overpaying the Fire Authority, essentially subsidizing service to the authority’s other contract cities.

Agran backs the rebate plan but has said he expects Irvine to withdraw from the Fire Authority and open its own fire department when the agreement expires in 2030.

Tuesday night’s move also showed a recent shift in the council’s power dynamic, which used to be dominated by an Agran-backed Democratic majority.

That balance changed in January with the emergency of a strong Lalloway-dominated Republican majority. But it has shifted again. Republican Councilwoman Christina Shea has cast several votes lately with Agran’s camp.

With Shea’s support, Agran was able to gain a majority in threatening to oust Lalloway.

Correction: A previous version of this article misstated the number of cities subsidized by Irvine taxpayers’ overpayment to the OCFA. We regret the error.