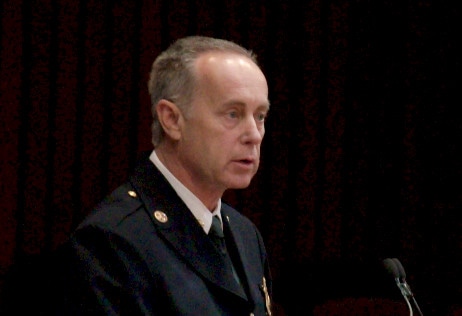 After being called out for a series of mistakes and errors at his agency, the county’s top fire official says he’s changing his leadership style.

“Every one of the mistakes that has been covered by the media was preventable and should not have happened,” Orange County Fire Authority Chief Keith Richter wrote in a memo last month to his staff.

Richter was referring to the agency’s collection of $1.7 million for safety inspections that never happened, concerns about potential bid-rigging of ambulance contracts and the disabling of seat belt warning systems on nine fire engines.

“The real answer is that the OCFA needs to change our culture so these kinds of things never occur,” Richter wrote. “This requires a different approach to the way I provide leadership. So, starting now, I am changing my approach to problem-solving.”

Yet some agency insiders say Richter might want to start by boosting his attendance to key finance meetings with board members at the $470-million regional fire agency.

There have been more than a few eyebrows raised by Richter’s recent absences from monthly Budget and Finance Committee meetings, where a group of board members meet to tackle major issues, like how to approach paying for nearly $500 million in unfunded retirement obligations.

Richter missed a dozen out of 21 Budget and Finance Committee meetings in the two years ending in October, including six of nine meetings last year, according to a Voice of OC review of records.

Some board members say he should absolutely be present.

“Obviously I have an expectation that the chief is going to attend all committee meetings,” said OCFA Director Todd Spitzer. “The chief is supposed to be there.”

“It’s one thing to miss a meeting here and there, but that’s a pattern,” he added.

“The chief seems to be a sincere and committed member of the agency, however neither he nor the committee or the board are effectively addressing the agency’s primary problems,” he added, pointing to the unfunded pension obligations.

“The agency has an insatiable appetite for cash,” said Barnett.

Indeed, between rising pension costs and tensions over the city of Irvine’s future participation with the regional fire protection agency, many of the most daunting challenges facing OCFA are financial.

And those tough financial discussions are often hashed out at the agency’s finance committee.

In 2010, Richter had a perfect attendance record, making it to all seven meetings, records show.

But starting in 2011, he began missing meetings, such as the January, March, July and October gatherings that year, according to the meeting minutes.

This year Richter has missed five meetings so far, including some of the most recent — August, September and October — according to records and staff.

His predecessor as chief, Chip Prather, also missed about half of the 20 committee meetings from 2005 through 2007, according to the records. In Prather’s last two years, however, he attended nearly all of the meetings, only missing two out of 12.

Richter’s absences have dovetailed in recent years with frequent business travel, according to a review of his expense records.

Those trips included technology-focused gatherings such as the DECCAN Conference in San Diego, the National Alliance for Public Safety GIS Foundation in Northern California and the IAFC Technology Council in Alabama.

In all, the chief sought just under $10,000 in travel reimbursements in fiscal year 2013, according to the records.

Richter says he has an expertise in technology and that his traveling “bears good dividends” for OCFA.

“A lot of those travel opportunities give me an opportunity to see what the best practices” are in the industry and how OCFA can improve its technology, Richter said.

The Fire Authority is also in the middle of replacing its internal intranet and upgrading its computer-aided dispatching software, officials say.

“When you have that kind of money going out, certainly you want your CEO to be integral in the direction of that and make sure he’s well aware,” spokesman Kelly Zimmerman said.

Irvine City Councilman Jeff Lalloway, who has been critical of OCFA over Irvine’s financial contributions to the agency, said the chief needs to strike the right balance between training needs and being around for key meetings.

“If his job requires some training, whatever that might be, I think we all support that. So there’s a balance between continuing training … and being there and supporting the committees” and the entire board, said Lalloway.

Richter, meanwhile, says he doesn’t worry about being absent at finance committee meetings.

“I don’t feel like I really miss anything, because I’m briefed by staff after the meeting,” he said, adding that he also helps his finance director prepare for it.

“We have numerous executive staff meetings to talk about what’s going on at the Budget and Finance Committee.”

Richter adds that he also has permanent schedule conflicts, like the statewide Firescope advisory board meetings that fall on the same Wednesday as the committee meetings four times per year.

As for the five other meetings he missed last year, Richter says he traveled to receive awards at conferences during the May and August meetings and spoke at a 9/11 memorial ceremony in September.

Several board members agree that Richter doesn’t need to join the meetings, saying fiscal issues are being properly handled by top managers who meet regularly with Richter.

“I would submit that the chief has better things to do than budget and finance, because this is where we really bore down into the dollars and cents of budgets and some of the other financial issues that we deal with,” said Laguna Hills Councilman and OCFA Director Randy Bressette, who sits on the finance committee.

“There’s a substantial amount of senior fire authority staff who [attend] these meetings,” he added, including the assistant chief of business services and treasurer.

“I have not been personally concerned about whether Chief Richter attends or doesn’t,” said Laguna Niguel Councilman and committee member Jerry McCloskey, adding that his impression is that the chief is up-to-date on financial issues.

“Most of the budget items originate from the staff, and I presume that the chief is involved in the preparation of the information that is presented to the Budget and Finance Committee.”

“That attendance record is not inconsistent with how the fire authority is being run today,” said Spitzer.

“He’s delegated, and there hasn’t been sufficient follow-up. And so his attendance [record] is not a shock, and it’s indicative of what’s going on at the agency,” said Spitzer.

In the case of the hazardous materials inspections, OCFA recently charged more than 1,000 local businesses for inspections that never took place. The erroneous charges, which took place for several years, totaled nearly $2 million.

Lalloway calls the issue a “tragic failure of OCFA to charge people for the services and not perform them.”

There are some signs that the recent torrent of criticism over the inspections and other controversies is wearing down senior staff.

OCFA’s top spokesman fired back when asked about Spitzer’s critique that the hazardous materials or hazmat program showed oversight issues at the agency.

“That’s irresponsible for Supervisor Spitzer to say,” Zimmerman said during an interview, adding that the agency’s chief “doesn’t need to micromanage” his department heads.

“He’s continuing to stir it up, and that’s irresponsible.”

“If Kelly is speaking on behalf of the chief, then their collective lack of accountability for oversight of taxpayer money is mind-numbing and consistently disappointing,” said Spitzer.

“There are consequences for such a repeated lack of insight and for the inability to accept responsibility for such gross mismanagement.”

Zimmerman later backtracked from his comments.

Richter said criticism of the hazmat issue is legitimate.

“We certainly dropped the ball on the hazmat inspection issue,” said Richter. “I think we’ve admitted that time and again, that we didn’t do a good job of monitoring what was going on with that program.”

At the core of the failures, Richter said, was antiquated software, a lack of understanding of the billing process and human error.

OCFA had “very poor systems in place to be able to account for [inspections] we had done in the past,” the chief said. And “we didn’t do a great job of following up between departments.”

The county had billed businesses before the inspections were done, he added, saying OCFA staff didn’t recognize that even if they didn’t do an inspection, they would still collect the money.

“It was an error. We’re fixing the error,” said Richter.

Union officials have charged that management had been warned for years about revenue problems with the program, yet failed to follow up and investigate.

“OCFA leadership has been aware of these issues and has knowingly permitted this practice of providing misleading information to the state and county to continue,” the Orange County Employees Association wrote in a letter to the Fire Authority board members.

The program is now under investigation by prosecutors at the district attorney’s office.

Richter said that while the previous warnings centered on loss of revenue and loss of jobs, they still should have sparked a closer look that may have caught the issue earlier on.

“Certainly I think there were managers in the loop that could have” drilled into the employees’ concerns, said Richter.

Part of the issue, he added, was a lack of “proper cross-channel communication” about what the program’s requirements are and where the revenues are coming in.

OCFA has since handed off much of the hazmat inspection work to the county Health Care Agency.

Going forward, Richter is working on a plan to improve communication between himself, the board and staff.

Many of the recent problems have been the result of “breakdowns in communications,” said Richter. “I need to include messaging to my board in that effort. The board has the responsibility for the organization, and they certainly have the right to know what’s going on in the organization.”

Additionally, he said, staff needs to make sure that “we are checking in with each other and not making unilateral changes that ultimately will go into someone else’s department” without communicating.

He’s expected to show his plan to the board in November, with a presentation expected at January’s public board meeting.

Richter is expected to give monthly progress reports, with a final report after six months.

Many insiders have noted that the board’s 180-day deadline for turning things around coincides with Richter becoming vested in his pension at the agency.

Thus, Richter is covered whether he can turn OCFA around or not.

“I am very optimistic” about OCFA’s future, said Richter. “We’ve got a great team of people here.”