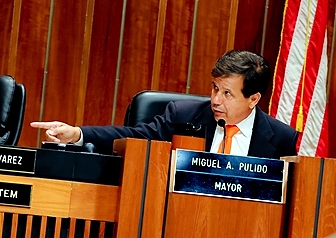 Santa Ana Mayor Miguel Pulido for years has misrepresented the nature of his ownership of downtown properties on public disclosure forms required of elected officials under state law, Voice of OC has learned.

For at least a decade, Pulido listed his family’s auto care shop and a vacant lot as owned by the Pulido Family Trust on his annual statement of economic interest forms, which state law requires of all elected officials. But property records show that the mayor and his family members owned shares of the properties outright.

This information raises new questions about whether Pulido had violated the state’s Political Reform Act, which governs conflicts of interest, when he voted to dismantle a special downtown property tax district that funded security guards, cleaning services and promotions of the area.

The vote to kill the tax district was unanimous, so Pulido’s misrepresentation will not change the outcome even if his vote is invalidated. But Pulido could still be subject to a fine for violating the law.

Generally, state law prohibits elected officials from voting on issues affecting properties they own. For that reason Pulido, since 2008, had recused himself from votes regarding the property tax district.

Pulido’s recusals were important, because his brother who runs the shop, Jose Pulido, claimed that the special tax was the reason why the family’s Ace Auto Care shop was thousands of dollars delinquent on its property tax bills.

But then earlier this year the Fair Political Practices Commission issued an advice letter that allowed Pulido to vote on issues relating to the tax district as long as his share of the family’s shop resided only in a family trust, that his share was revocable and that he didn’t receive income from it.

Pulido then voted with five of his colleagues Jan. 22 to dismantle the property tax district. Councilwoman Michele Martinez had to recuse herself from the vote because she leases property in the downtown.

Bob Stern, president of the Los Angeles-based Center for Governmental Studies, said that the new information could mean that Pulido’s vote was illegal. He said that the mayor probably will not seek a new FPPC opinion, given that it would not likely turn out in his favor.

“He’s not going to ask for another opinion,” Stern said. “Why would he? He knows the answer.”

Pulido at the last council meeting recused himself from voting on a new business tax district that replaces the property tax. City Attorney Sonia Carvalho indicated that it was because of new information but would not be specific.

It is likely that Pulido will have to amend his economic interest statements on what are known as Form 700. Officials are required to sign the statements asserting their accuracy under penalty of perjury.

Pulido had listed the property ownership as under the family trust on forms dating  back to at least the late 1990s, the oldest record immediately available. That batch alone comprises more than a dozen filings. And the Pulidos have owned the property since before he was elected to the City Council in 1986.

“When members of the public feel that a filer has misrepresented, their recourse is to file an enforcement complaint,” said Lynda Cassidy, FPPC division chief of technical assistance. “Generally, there’s an administrative fine of $5,000, per violation.”

If Pulido amends his filings, it would be the second time in recent weeks.

Voice of OC discovered the inaccuracy on the filings during the news agency’s investigation of a property swap between the Pulidos and a city contractor that has ethics experts questioning whether the mayor received an illegal gift or perhaps was even bribed.

In November, Voice of OC reported that in 2010, Rupen James Akoubian, president of NAPA Orange County Auto Parts, sold a Westminster home to the Pulido family for $230,000 less than fair market value.

During the nearly two years between those transactions, Pulido voted for two separate contracts for NAPA Orange County Auto Parts, including a three-year, $1.35-million contract in 2011 that made the Santa Ana-based NAPA store the city’s exclusive auto parts provider.

City Attorney Sonia Carvalho is investigating the circumstances of the transaction and is to report to the council early in the new year.

Pulido neglected to disclose his interest in the Westminster home during that time. After Voice of OC published its article, Pulido filed amendments for the 2010, 2011 and 2012 filings showing ownership of the house.

However, those amendments are also wrong. Once again, Pulido incorrectly stated that the home was owned by the family trust when the family members owned it outright, according to property records. And in 2012, they transferred the house solely into the mayor’s name.

Pulido did not return a phone call for comment on this article.

Tired of being kept in the dark about government? You can invest in accountability journalism by supporting Voice of OC.