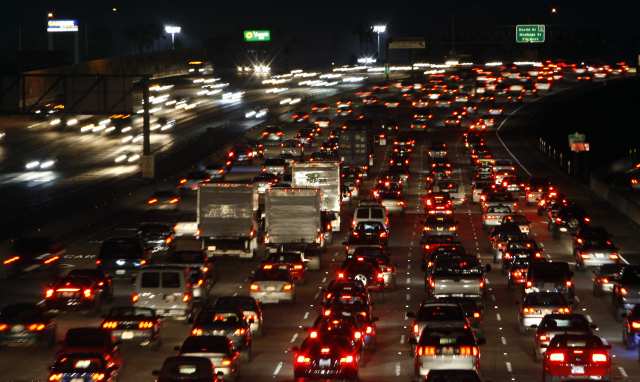 Orange County transportation officials on Monday said that despite elected opposition to adding toll lanes on existing freeways, regional and state officials are slated to “bludgeon” them with pressure to do just that.

Regional and state transportation agencies are now studying the creation of a countywide network of toll lanes – including on another section of the 405 between Irvine and John Wayne Airport, according to the Orange County Transportation Authority.

“We’re going to be going through this for the next several years, as the managed lanes and the toll lanes are going to be, I don’t want to say forced – bludgeoned over us,” said OCTA Director Frank Ury at Monday’s board meeting.

“But basically it’s going to be…a mandate that comes down,” added Ury, a Mission Viejo councilman who unsuccessfully ran for county supervisor during the June primary.

When the idea of toll lanes on Interstate 405 came to the fore last fall, the backlash was fierce.

Numerous elected officials and business representatives protested, calling the proposal – among other things – a violation of a promise to voters for Measure M2, the county’s half-percent sales tax for transportation upgrades.

Amid heated debate, the idea was all but killed in December.

SCAG in particular is looking at the 405 freeway south of John Wayne Airport, Brotcke said, and a contract was just awarded for Caltrans’ Orange County division to look at creating toll lanes across the county.

As traffic continues to get worse on many freeways, the federal Highway Trust Fund is close to going bankrupt, with federal officials saying it could start bouncing checks this summer.

And at the state level, Caltrans has been described as being “way in the hole” on maintenance funding.

The state’s highway system needs about $8 billion for maintenance each year, according to Caltrans, yet only about $2 billion is expected to be available.

Faced with those challenges, toll lanes are seen as an attractive option for many transportation planners in Southern California.

OCTA staff and others have pointed to toll lanes as the most efficient way to move people on a freeway, as well as raise much-needed money for maintaining the highway system.

Los Angeles County’s transportation agency, known as Metro, has implemented toll lanes for solo drivers on the I-10 and I-110 freeways. That agency has studied adding similar lanes to the 605 and 105 freeways, Brotcke said, and is expected to start developing the projects soon.

But most OCTA board members, along with a host of local elected officials and business representatives, have opposed the idea.

Many of the criticisms have centered on Measure M2, Orange County’s half-percent sales tax for transportation improvements.

“Tolling on top of taxing was never part of the deal,” Fountain Valley Councilman John Collins said last year of the measure.

With toll lanes facing strong local opposition, it remains to be seen if the state can get toll lanes added to Orange County’s freeways.

Given the dwindling state and federal funds, any major freeway projects will likely rely heavily on Measure M2 money.

And the OCTA board, which so far has bowed to public pressure against toll lanes, controls those purse strings.

But a compromise on the issue isn’t out of the question.

OCTA officials are adamant about building a partial extension of the State Route 241 toll road in South Orange County – a project that’s been met so far with fierce resistance from state officials.

Will OCTA and Caltrans try to use toll lanes as a bargaining chip for a state blessing of the 241 extension?

It’s too early to tell. But OCTA officials say that when it comes to cutting down traffic congestion in South County, there aren’t any other viable options than the 241 extension.

“The alternatives that are available are very limited,” said OCTA Director Pat Bates at this week’s meeting.

Widening the I-5, she added, “could be very devastating to the communities, including some of the historical sites along the 5 currently, especially [in] the city of Mission Viejo.”

So far, state officials seem to be playing hardball when it comes to the toll lanes.

Caltrans has been taking its time to ratify OCTA’s decision to kill toll lanes on the northern section of the 405, according to OCTA.

If Caltrans doesn’t give a green light for the non-toll plan by late summer or fall, the whole project will grind to a halt, OCTA officials say.  That could potentially add millions of dollars to the price tag.

With both sides locked in stalemate, plenty more rounds of debate can be expected.