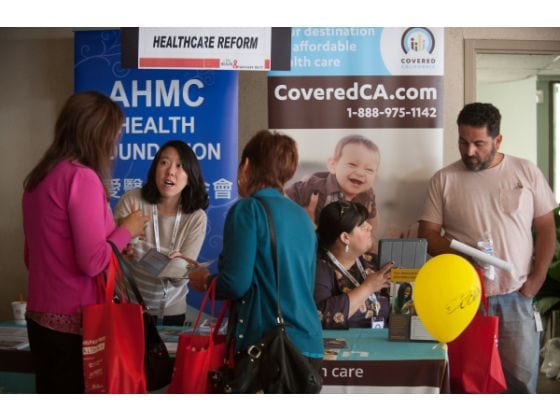 Health officials and advocates in Orange County are doing better than their counterparts statewide when it comes to enrolling non-English speakers in Obamacare, according to data just released by Covered California, the state’s health insurance exchange.

The data show non-English speakers make up 23 percent of county residents who are eligible for a federal subsidy under Obamacare and have signed up for the state’s healthcare exchange, which is on par with Census data showing that more than 21 percent of Orange County speaks English “less than very well.”

“Orange County actually did quite well, in terms of the projection numbers in the last enrollment round. We were the number two county in terms of overall enrollment numbers,” said Michael Villaire, spokesperson for Covered OC and the Chief Operating Officer at the Institute for Healthcare Advancement.

“There was quite a bit of hype and hooplah about the roll out of the [Affordable Care Act]…but I think really what you have are a pretty dedicated group of people who are doing the enrollment.”

Here are the Orange County percentages for languages spoken among first round enrollees who qualified for a subsidy:

Although a direct comparison to Census data does not account for those who are or aren’t eligible for a subsidy, it is worth noting that Spanish-only speakers make up about 12 percent of the total County population; 5.8 percent are Vietnamese speakers, 2.6 percent are Korean and 2.2 percent are Chinese.

The data paint a different picture statewide. People with limited English proficiency (LEP) make up an estimated 40 percent of California’s 2.7 million adults eligible for the subsidy, according to a 2013 report by the UC Berkeley Labor Center and UCLA Center for Health Policy Research.

But so far, only 22 percent have enrolled.

“In this first enrollment period, while overall the numbers for Covered CA were huge, it seems as if the majority [of enrollees] were English speakers,” said Cary Sanders, Director of Policy Analysis for the California Pan-Ethnic Health Network.

“When you look at the remaining uninsured, you’re going to find that it’s an even higher proportion who are [limited English proficient] who didn’t make it in the first round. They really need to double down and go back to LEP communities and get those folks enrolled.”

The numbers do vary by county based on population and language demographics. In the Mono, Inyo and Imperial counties combined, more than 47 percent of subsidy enrollees are Spanish speakers.

People with limited English proficiency (LEP) are considered a “hard to reach” population, alongside immigrants, young adults who don’t understand their need for insurance, LGBT individuals and other groups.

“I think [the numbers] are an indication that the groups that are experts in these populations need to be funded. Covered California missed the boat initially, to have a higher success rate in the LEP community,” says Isabel Becerra, CEO of the Coalition of Orange County Community Health Centers (CoCCC).

CoCCC was part of a coalition of community health clinics, many with deep roots in Latino, Vietnamese, Korean, and Arab-American communities, whose application was rejected in the first round of grants awarded by Covered California last year. A few Orange County groups did receive funding, but through partnerships with larger regional organizations.

The coalition, Becerra said, was eventually able to tap county Health Care Agency funds to hire six employees for enrollment and outreach, a slice of Tobacco Settlement Revenue that is already allotted to community health clinics.

Orange County ranks second in the state in the number of enrolled, with 131,804 people signed up. Los Angeles County accounted for 404,889 new enrollees.

“It takes a lot of outreach to reach [limited English proficient] communities – often times, it takes more than one touch. It’s two or three touches, at the library, at the school, to bring them in,” said Sanders.

Another $16.9 million is now available for outreach during the second enrollment period, which opens in November, with a portion targeted at the hard-to-reach populations that weren’t reached in the first enrollment period.

“Despite the lack of funding from Covered CA we did get to the top 150 as a result of a lot of hard work and dedication and other funders and volunteers who stepped up,” Becerra said, referring to a list of top 150 organizations ranked based on high enrollment numbers. The new grant program rewards those high-performing outreach groups.

“We just hope that when they see the flood of applications coming out of Orange County, they give those applications consideration of the fact that they hardly funded anyone [the first time].”

During the first enrollment period, which ran from October 2013 to March 2014, more than 1.39 million people statewide signed up for health insurance, including 88 percent who qualified for a federal subsidy. According to one survey, the number of uninsured in California has dropped from 22 to 11 percent.