County Supervisor Todd Spitzer engaged the help of County CEO Mike Giancola and Chief Operating Officer Mark Denny earlier this year to put his own campaign consultant on the county payroll, arguing publicly that it was needed because the county parks staff was “understaffed and needed additional help” to adequately market his pet project, a victims memorial at Mason Regional Park.

Indeed, in an April 25 Facebook post about the event, Spitzer publicly thanked the county’s top executives for their help.

“I would like to thank the County of Orange and the Orange County Parks and especially Mark Denny and his staff for their leadership in making this dream a reality,” Spitzer wrote.

Yet a Voice of OC review of emails, memos and documents about the victims’ memorial shows that county parks staff objected strongly when they were inundated by requests from Spitzer’s office for unauthorized special arrangements and excessive preparations for the April 21, 2014 event unveiling designs for the crime victims’ memorial at the county park.

The event was authorized a year earlier by supervisors – with the express mention that public resources wouldn’t be spent on one supervisor’s pet project.

That didn’t turn out to be the case.

“Over the span of the competition period, OC Parks staff responded to over two hundred emails, and innumerable phone calls and texts from Third District (Spitzer’s) staff with questions or directives for event logistics; media contacts; preparation and distribution of online and print communications, agendas and speaking points; coordination of speakers and attendees,” wrote OC Parks Director Stacy Blackwood in a April 24, 2014 memo about the event.

Documents indicate county staffers who work for Spitzer – who himself still represents crime victims as a private attorney – also apparently were advocating to parks staff that his campaign consulting firm – Communications Lab – be paid to engage in fundraising activities for the event.

“Third District staff initially prepared a draft scope of work reflecting their expectations for the outreach and event (see email from Carrie O’Malley to Stacy Blackwood dated 3/17/14 at 4:35 p.m.), which included numerous references to fundraising campaign goals,” wrote Blackwood in her Apr. 24 memo.

Blackwood’s memo further details a brewing situation at OC Parks before the unveiling event, with staff fighting back a push from Spitzer to use the contract for fundraising.

“Since the board action for this project clearly directed that all project funds would be raised by a ‘committee of volunteers,’ OC Parks staff consulted with County Counsel on the suggested scope. County Counsel advised that pursuant to board direction, fundraising could not be accomplished using county resources (by staff or outsourced), and further advised that staff and constant time should be limited to activities specifically tied to the design competition process.”

And while Spitzer said on Facebook that he “hosted a reception that I paid for from my campaign funds,” Blackwood’s memo also disputes that notion.

In her memo, Blackwood noted that, “OC Parks incurred expenses for supplies and services related to the aforementioned program of events. Food ($2,661), equipment rentals ($1,915), presentation and public information materials ($3,819) totaled $8,395. Supervisor Spitzer reimbursed OC Parks for the food purchased for the October 16, 2013 and February 26, 2014 events in the amounts of $480 and $626.40 respectively.”

One series of emails sent between OC Parks staff and top executive Carolyn McInerney just before the event details a tense debate over whether the whole project had gone beyond authorization.

On the morning of April 16, 2014, McInerney wrote to Blackwood that “Heard from (Spitzer staffer) Carrie (O’Malley) Monday that Spitzer does not want to go back to the board with anything about crime victims’ memorial. It was my understanding that we were going back with the going forward plan, ‘permission’ to have your folks continue to support (whatever that means), so in absence of that, are you comfortable with no further, formal action?”

Blackwood wrote back that Spitzer’s campaign consultant (Arriana Barrios) was already overwhelmed herself and raising the issue of more money.

“She said Carrie had given her a monumental list of tasks (like brochures, 30/60 promotional videos, etc.), which she absolutely can’t accommodate within the existing contract. She said she might be open to a fundraising contract but had yet to hear one requested or offered.”

McInerney fired back with a somber warning.

“Ariana should get used to unrealistic expectations,” McInerney wrote adding, “there is a mountain of work ahead, and I don’t know how either of our offices can invest additional time or money without Board blessing.”

Eventually, the event unveiling the design for the victims memorial went forward.

However, the invoice to pay Barrios’ firm remains unpaid at this point, with County Auditor Controller Jan Grimes holding back payment because of her own concerns about a lack of authorization for the contract from county supervisors.

When asked about authorization for the contract, Spitzer initially said he would pay for the PR contract for Communication Lab from his office budget. He later adjusted to indicate he would just bring the entire matter back to the full board for a discussion.

The issue already has drawn reaction from County Procurement Officer Rob Richardson, who reminded county staff last month about a new procurement policy established by a board subcommittee led by Spitzer himself. 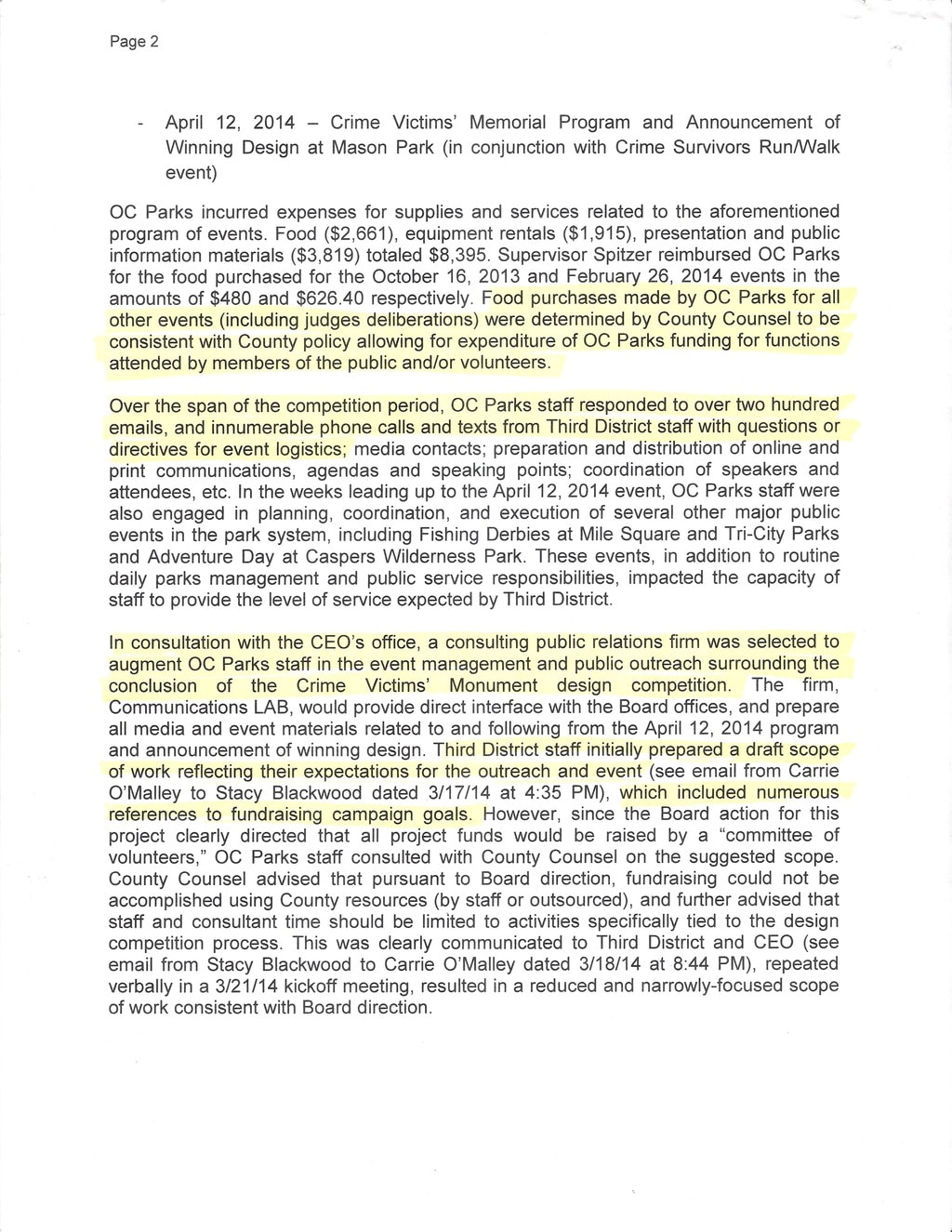 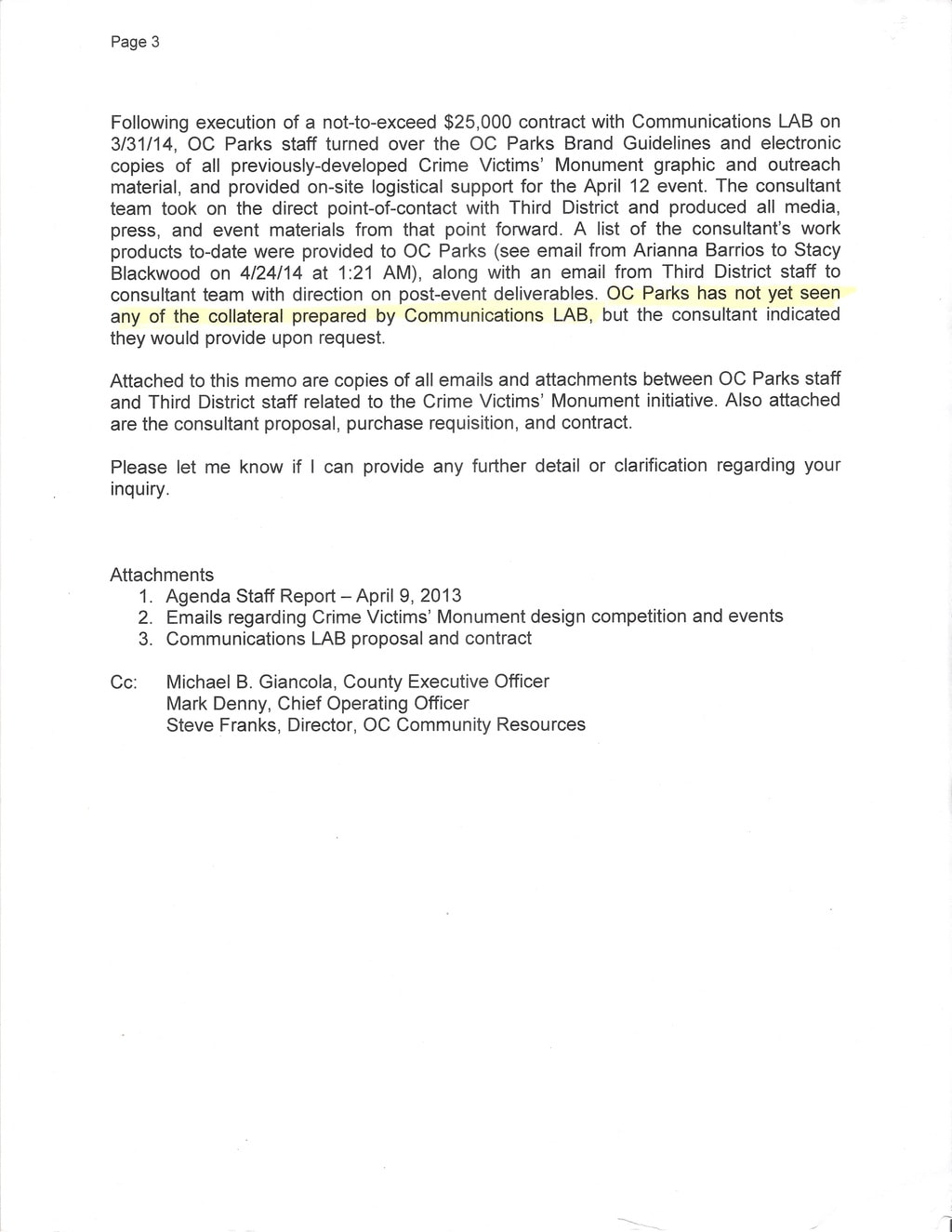