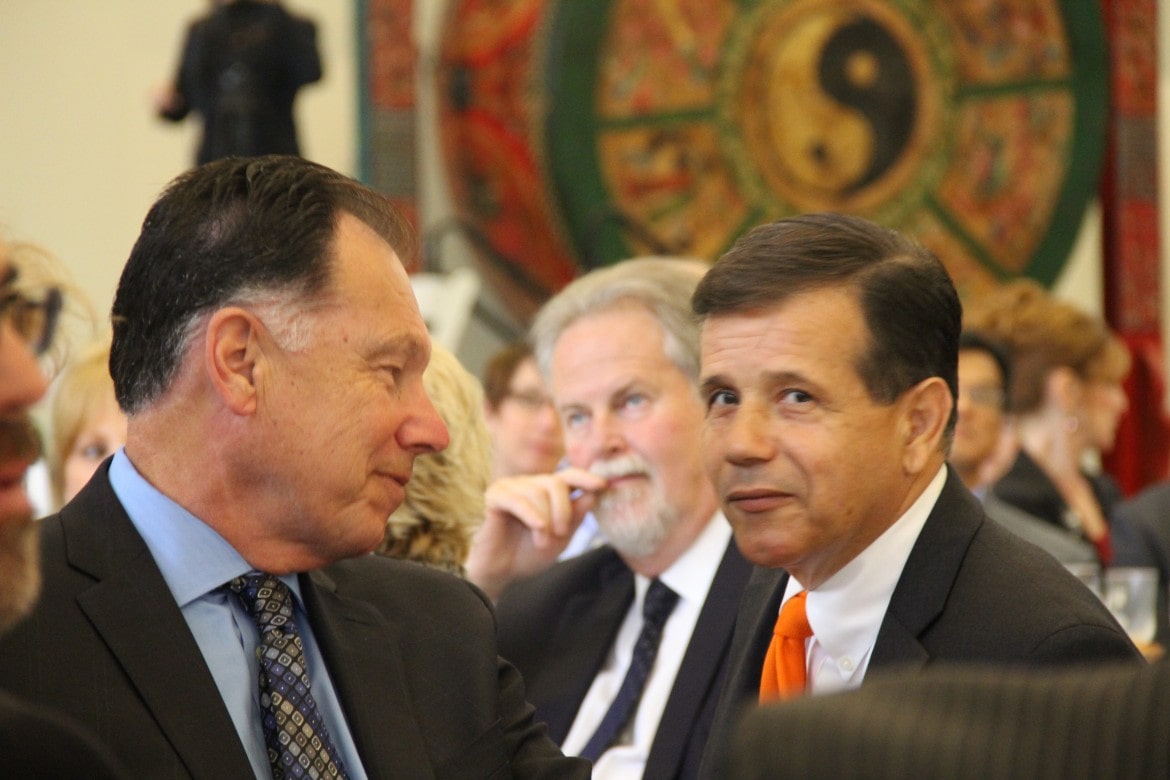 Early this year, when it became clear that District Attorney Tony Rackauckas would be investigating a suspicious real estate deal between Santa Ana Mayor Miguel Pulido and a city contractor, Rackauckas received something he’d never been given before.

It was a campaign contribution from Dennis DeSnoo, Pulido’s longtime friend and political consultant.

In fact, the $1,900 contribution on Jan. 22 was the first time in nearly 10 years that DeSnoo has given to any candidate for countywide office and the first time ever for DA, according to Shirley Grindle, the county’s campaign finance watchdog.

Other Pulido allies giving to Rackauckas’ campaign this year include a developer and his wife, a car dealer, and the wife of a well-healed client of the mayor’s consulting business. And Al Stokke, the criminal defense attorney Pulido hired to advise him on the property swap issue, is also a longtime campaign contributor to Rackauckas.

All told, Rackauckas this year received $5,000 from these folks as of this month. DeSnoo and Stokke would not comment. Others who were reached insisted their contributions were not made on Pulido’s behalf.

Such circumstances are not limited to Santa Ana. For example, Irvine’s forensic investigation into the Great Park’s finances has piqued the DA’s interest. But the consultant facing some of the toughest scrutiny – public relations firm Forde & Mollrich – gave what was in essence a loan to Rackauckas’ campaign last decade.

It’s relationships similar to these – and in particular Rackauckas’ ties with Stokke — that the Orange County Grand Jury highlighted in a 2002 report that accused Rackauckas of intervening in cases involving campaign contributors at the donors’ behest.

Those cases ranged from domestic violence to a high-profile consumer protection case against a business owned by billionaire George Argyros.

Rackacuckas had charges dropped after meeting with campaign contributors, which included the targets of the investigations or their attorneys, according to the grand jury report, which was covered by the Los Angeles Times.

“[Rackauckas] did not pay proper attention to a possible appearance of impropriety” based on the fact that Argyros’ firm and its attorney, Stokke, were contributors to Rackauckas when the DA personally took over settlement negotiations, according to the grand jury report.

Rackauckas ultimately decided not to name Argyros in a complaint, rejecting the recommendation of the three top prosecutors assigned to the case who believed Argyros should have been named as a defendant, the grand jury report states.

At the time, Rackauckas claimed the grand jury’s findings were based on ex-prosecutors with vendettas against him, the Los Angeles Times reported.

Rackauckas spokeswoman Susan Kang Schroeder refused to address the issue when contacted recently. Stokke said he had not read the grand jury report and would not comment until he had done so. Later, he said he wouldn’t comment while the Pulido investigation is ongoing.

The DA’s investigation into Pulido stems from a Voice of OC article published in November that details a property swap between Pulido and the owner of one of the city’s auto parts contractors that in the end netted the mayor a $197,000 profit, according to public records.

Pulido exchanged a parking lot he and his family owned for a house in Westminster owned by Rupen James Akoubian. According to county assessor records, the lot was worth less than half the fair market value of the house.

The idea that Rackauckas might go soft on Pulido led members of the Santa Ana City Council to take the highly unusual step last week of setting a Sept. 30 deadline for the DA’s office and the state Fair Political Practices Commission to file charges against the mayor. If charges aren’t filed by then, the city will release its investigative report on the property swap.

The concerns among council members in part stem from Rackauckas being a special guest at Pulido’s state of the city address earlier this year. Rackauckas led the flag ceremony and sat beside Pulido at the mayor’s table.

After the scene was captured in a Voice of OC photo, Councilman David Benavides publicly questioned the integrity of the investigation, saying “one wonders whether there is an impartial investigation.”

Yet, despite such appearances, there is no evidence that Pulido has been involved in raising funds for Rackauckas. Adrienne Brandes – the wife of R.J. Brandes, an investor close to Pulido whose businesses have paid consulting fees to the mayor — said she donated at the behest of custom homes developer Charles Van Cleve, who also confirmed that.

Van Cleve also suggested that Don Crevier of Crevier BMW and William Lyon Homes — both considered close to Pulido and contributors to Rackauckas – supported the DA because they are involved in the office’s Gang Reduction Intervention Partnership, which is aimed at helping at-risk youth from falling into gang life.

“[Rackauckas] kind of reminds me of George Bush. He’s not the greatest public speaker, but his heart’s in the right place,” Van Cleve said. “I think he’s a standup guy.”

Grindle, who is Pulido’s former campaign treasurer and a longtime critic of Rackauckas, said DeSnoo was likely pressured to make the contribution.

She pointed out that DeSnoo hadn’t donated to any county candidate in nearly a decade and doesn’t normally make contributions that large, she said. DeSnoo’s contribution to Rackauckas was “definitely out of character,” she said.

“My guess would be Miguel [Pulido] asked [DeSnoo] to make a contribution to curry favor with this weak DA we’ve got,” Grindle said.

After DeSnoo declined comment to a reporter, Grindle said she received an angry phone call from him accusing her of feeding information to Voice of OC.

Grindle also said that having Stokke as Pulido’s defense attorney made her worry that Rackauckas would decide not to prosecute Pulido.

So far, some city officials privately say the DA’s office has made no attempt to interview key staffers about Pulido – another reason why council members question the DA’s investigation.

Fleet Manager Rick Longobart, who initially recommended the auto parts contract, said in a recent Voice of OC interview that he hadn’t been contacted by the DA’s office. Former City Manager Dave Ream, who presided over the majority of Pulido’s 20-year tenure as mayor, also confirmed the DA’s office hadn’t contacted him.

In addition to the Pulido investigation, the DA also disclosed recently that it has requested all documents relating to the ongoing investigation into Irvine’s Great Park. This is another instance where Rackauckas has ties to one of the top targets in a high-profile investigation.

In 2002, Forde & Mollrich and Irvine Councilman Larry Agran allowed Rackauckas to appear in pro-Great Park slate mailers, according to the OC Weekly’s Scott Moxley. Rackauckas didn’t report the contribution – which left Rackauckas in debt to the mailer $25,000 — for 10 months.

Rackauckas only reported the contribution after Grindle complained to the DA’s office and Attorney General, she said. Rackauckas didn’t pay off the debt until 2006.