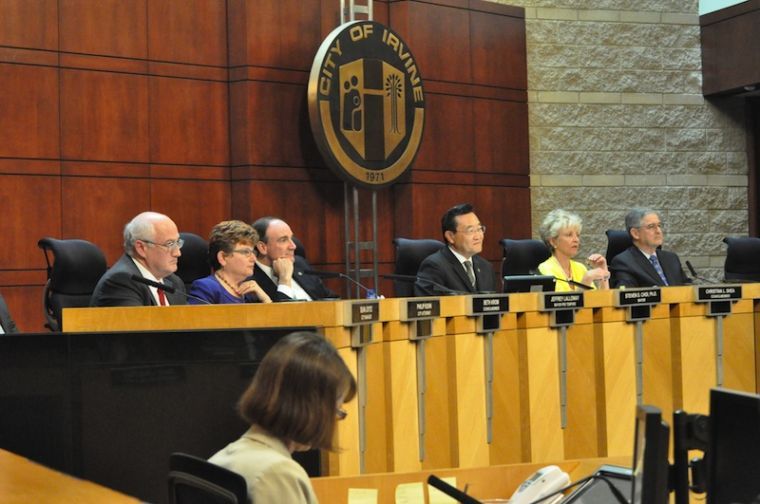 A slew of political action committees (PACs) have spent hundreds of thousands in an effort to keep Irvine’s Republican City Council majority in power, using a money route that is among the most complicated of any race in Orange County and making it difficult to trace the original sources of the funding.

Despite the twists and turns, it is clear that Great Park Neighborhoods developer Heritage Fields El Toro, LLC – which is building thousands of new homes around the 1,300-acre park – is responsible for a large portion of the contributions.

Another donor is the developer’s lobbyist, Starpointe Ventures. However, StarPointe CEO Patrick Strader wrote in an email to Voice of OC that its donations to the Republican Party of Orange County — which spent money in the Irvine race — were made because the party supports candidates in a host of cities, not just Irvine.

“Starpointe Ventures supports candidates and ballot measures with a shared public policy vision; economic development tempered by intelligent planning,” Strader wrote. “We fully recognize that political donations cannot be earmarked. We trust that the organizations to which Starpointe contributed spent the contributions wisely.”

Meanwhile, Larry Agran — the councilman who led the former Democratic council majority until the Republicans took power in the 2012 election — has loaned over $200,000 to his own campaign and contributed at least $49,300 to a slate mailer that is promoting Agran and two other Democratic candidates, Melissa Fox and Mary Ann Gaido, campaign finance records show.

Agran and Fox are challenging incumbent Republican Councilman Jeffrey Lalloway and Lynn Schott for council seats, and Gaido is challenging Republican Mayor Steven Choi for his seat. The top two vote getters in the council race will win seats.

This year’s election battle is among the most vitriolic in recent memory, with candidates on both sides accusing each other of using deceptive campaign tactics.

The Republicans say the Agran slate is using a faux newspaper called Irvine Community News and Views to pitch itself as a “slow growth” team, when in reality they have promised a development lobbyist that they would support new projects in a high-density zone called the Irvine Business Complex.

“Behind the scenes they’re voting for development and lying to the public,” said Republican Councilwoman Christina Shea at a recent special council meeting to discuss the issue.

Agran and his Democratic allies say the Republicans are backed too heavily by the housing developer, which is using a circuitous route to funnel money that effectively obscures the true identity of the donor.

“What’s going on is Citizens United on steroids at the local level,” Agran said, referring to the landmark U.S. Supreme Court decision that was seen as opening the floodgates of campaign money from corporations and unions.

When it comes to disclosure, the Democrats are indeed more transparent.

The slate mailer promoting the Agran team, called Irvine Community News and Views, portrays itself as a grassroots newspaper, but does include notations informing the reader that the candidates covered by the publication paid for their space.

Meanwhile, money promoting the Republicans has flowed through several PACs. Here’s a snapshot:

Agran calls it “money laundering,” and unequivocally alleges that the whole operation is illegal because it is coordinated with members of the Republican council majority who will approve “anything” the developer wants.

Lalloway, considered the leader of the Republican majority, categorically denied that he was involved in the PAC spending, and said that Agran – who has been serving on the council on and off since 1979 – needs to retire.

“I have absolutely nothing to do with any [independent expenditure] that spent in Irvine, and if Councilman Agran wishes to make an allegation that I am conducting something illegal, please be certain to have him tell me where I should send a complaint when I sue him,” Lalloway said.

Lalloway also shot back at Agran’s contention that the Republican council majority will vote for whatever the developer asks for.

“Councilman Agran received more money from developers when he and his little group was in control and he’s now claiming that he wasn’t beholden to developers? I believe he approved every project that came before the council for development in the years from 2000 to 2012 when he was in control,” Lalloway said.

Representatives with Heritage Fields El Toro did not return an email seeking comment.

This isn’t the first time there have been allegations of dark money – and money laundering – in an Irvine council election.

In the 2012 council race, a Virgina-based nonprofit called Citizens in Charge funneled $200,000 into a statewide PAC that funded mailers attacking Agran and other Democrats while supporting Republicans for council. The money was considered opaque because nonprofits like Citizens in Charge don’t have to disclose their donors.

The state Fair Political Practices Commission has launched an investigation into the matter.