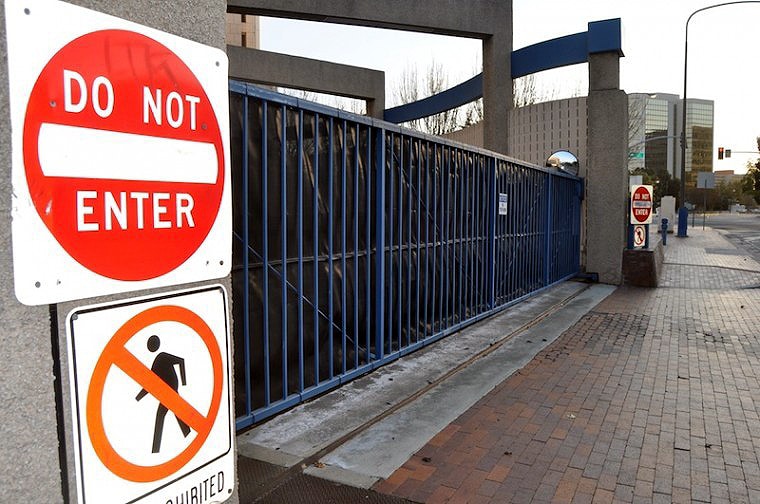 The shuttered bus terminal in downtown Santa Ana that will be used as an emergency homeless shelter.

Orange County’s Board of Supervisors voted unanimously Tuesday to drop plans to purchase an industrial building site for the construction of a year-round homeless shelter, instead calling on Santa Ana city officials to choose a shuttered bus terminal as the new site.

That outcry frustrated supervisors, who publicly scolded Santa Ana city council members for acquiescing to angry residents despite passing a zoning ordinance last year to allow the location in the first place.

“What a ridiculous scavenger hunt this has been,” said Board Chair Shawn Nelson.

Last August, the city council passed a zoning ordinance to comply with 2008 state legislation that requires cities and counties to make space available for a year-round shelter. The county then selected the Normandy Place site based on those city-approved zones.

Yet in October, under pressure from residents and school district officials, the city council passed a 45-day moratorium on the zoning ordinance and suggested revisiting the shuttered bus terminal across from the Hall of Administration.

“When I first got elected in 2007 the county wanted to build a multi-service center for all of Orange County at the Fruit Street property…and of course, the city council members, the mayor, everybody came into my office and said, Santa Ana doesn’t want to do that,” Nguyen said. “Then we talked about the Santa Ana bus terminal, and everyone marched into my office [again].”

“We did exactly what the city wanted and waited 5 or 6 years and here we are,” Nguyen said. “And now they’re talking about Santa Ana terminal.”

Nelson also asked county counsel to explore legal options against Santa Ana, given the “tremendous expense” of staff time for researching the zones and conducting appraisals of the property.

“This whole thing has been shameful, because [Supervisor] John Moorlach has been pushing for a shelter at the bus terminal for years. The only reason we didn’t do that was out of respect to our city colleagues,” Nelson said.

Although he ultimately voted with the Board in favor of using the bus terminal, Nelson said he didn’t think residents’ concerns about the Normandy Place property were valid.

“Anyone who wants to step in and say, ‘I’m for the homeless, but this is the wrong place’ — every location says that,” Nelson said. “We can’t perfect a homeless shelter. Santa Ana is the fourth densest city…every site in Santa Ana is has a school, has whatever crime rate it has.”

Dora Lopez, a Madison Park resident and one of the most outspoken activists against the Normandy Place site, said the decision was “a breath of fresh air” and a recognition by Supervisors that residents’ concerns were valid, not a knee-jerk, “not-in-my-backyard” reaction.

Lopez said the community group organized a rental bus and babysitting to transport scores of residents to Tuesday’s board meeting, many who don’t have means of transportation or didn’t know where the Hall of Administration is located.

“For this to have happened and for us to have impacted the decision — it’s such a win for any community with leaders who think they can make such a decision for us, [a decision] for life,” Lopez said.

Meanwhile, ‘Mamma’ Brizy Mae, a homeless woman who goes by her street name, underscored for supervisors the urgency of the situation going on right outside their meeting room.

“You never asked the homeless people. We’re human beings here. You have to treat us like you would your mother, your sister, your aunt,” she said. “We need a permanent shelter, not a temporary shelter. There’s people who have college degrees out there. Parents who don’t want to be a burden to their children.”

Reacting after the board meeting, city councilman Vincent Sarmiento said that supervisors were being somewhat disingenuous in their comments, pointing to Nelson’s efforts last year to push through a proposal for the county to buy a property in Fullerton for a year-round shelter before getting buy-in from residents.

“The Board listened to the constituents in Fullerton — they did the same thing,” Sarmiento said. “What I saw as a fatal flaw in this process is the Board didn’t engage these folks and do outreach.”

He also suggested that the Board explore dispersing homeless centers throughout the First District, in neighboring Garden Grove and Westminster.

At the council meeting later that night, councilman David Benavides said he was disappointed that supervisors voted to table the Normandy site.

“In reality I see this as a tremendous loss to our community,” Benavides said. “If we think this potential site is going to be tabled so we can go and look for another site, I think we’re being quite naïve.”

Massimo Marini, who helped found Civic Center Roundtable, said that residents who stood up and objected to the homeless shelter now have responsibility over the whole issue, not just stopping the shelter.

“You won. You’ve got your chance at responsibility,” Marini said.