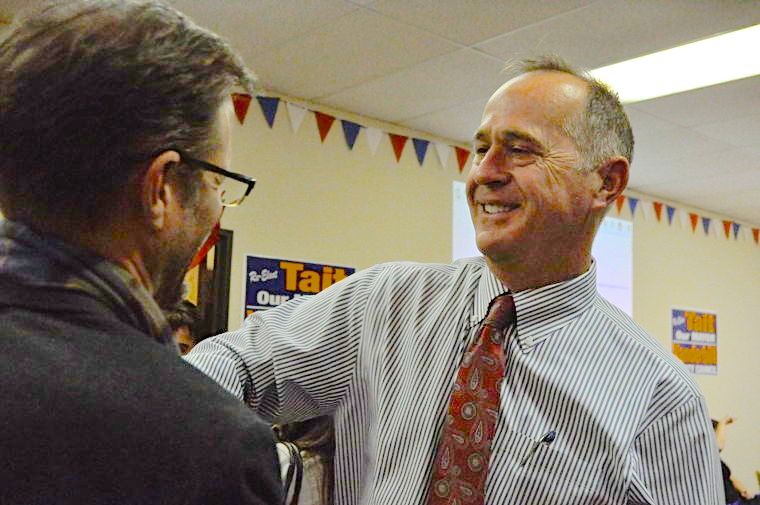 Meanwhile, incumbent Councilwoman Kris Murray won reelection and led the council race with 21.2 percent of the vote. Vanderbilt took second place with 20.1 percent, and Eastman came in third at 19.6 percent. Only the top two vote getters in the council race win seats.

The election victories take a seat away from the formerly 4-1 City Council majority that has isolated Tait in recent years because of his opposition to massive tax subsidies for politically connected businesses. With Vanderbilt’s election, the council becomes a 3-2 split.

Murray and Eastman could not be immediately reached for comment.

At his election headquarters in downtown Anaheim, Tait’s family and supporters cheered as Vanderbilt’s slim lead over Eastman slowly widened, with Orange Juice Blog publisher Vern Nelson in the background playing tunes on his keyboard.

Tait said his reelection and Vanderbilt’s victory signal that the voters are tired of city leaders steering public resources to expensive projects and subsidies for the resort area and major businesses, while paying little attention to underserved neighborhoods.

Tait cited the controversial $158 million tax subsidy for a hotel developer, a now scrapped Angel Stadium lease proposal that gave over 150 acres of land to the team owner for $1 a year, a $319-million streetcar system, and a $200 million convention center expansion – all projects and subsidies voted on in the last two years – as issues that have turned voters against the council majority.

“This is about the people being central to Anaheim, and not the resort district,” Tait said.

Said Vanderbilt: “The mayor had a message. He said we need to bring this stuff to light.”

Tait and Vanderbilt won despite facing one of the most well-heeled campaigns in Orange County’s local races. Disneyland poured in over $670,000 toward mailers and other campaign material to back Murray and Eastman while attacking Vanderbilt and another candidate — Latino leader Jose F. Moreno, who came in fourth with 13.6 percent of the vote.

“It was below the belt,” Tait said. “But obviously it didn’t have much of an effect.”

Jason Young, a Tait supporter and former Save Anaheim blogger, said the election night was a defeat for Disney and Pringle. “Curt Pringle and Disney got their asses kicked,” he said.