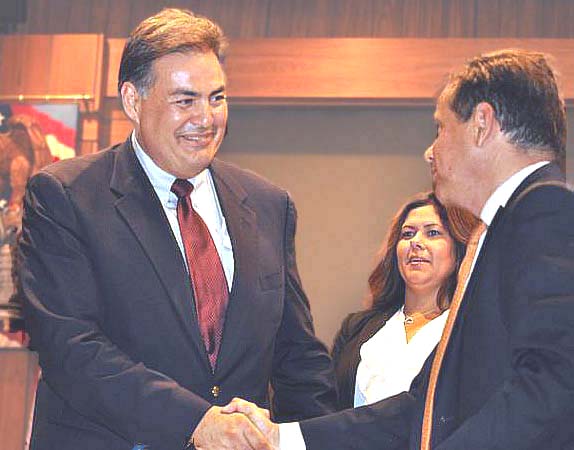 It can be argued that the Great Recession hit few cities harder than it did Phoenix. Home values fell by 55 percent, unemployment at one point topped 11 percent, and the city’s general fund deficit hit $277 million.

But by the end of 2013, City Manager David Cavazos had convinced the majority of Phoenix City Council members that the city’s budget woes were in its rear-view mirror. He said the tax base was growing at a rapid clip and projected more than 7 percent growth in general fund revenue for the 2013-2014 fiscal year.

Using this optimistic forecast, Cavazos put forward a plan to cut the city’scontroversial food tax in half at his last council meeting, Oct. 16, 2013. Phoenix council members approved the tax reduction, and they praised their outgoing city manager for his fiscal management and ingenuity.

However, by January a starkly different reality took city leaders by surprise – Phoenix was heading for a fiscal cliff. Cavazos’ projections for revenue growth were way off the mark, with the increase ultimately coming in at only 4.6 percent. Council members hiked the water tax, raised city fees and slashed employee pay to close an estimated $37.7 million budget hole.

Yet they were never able to hold Cavazos accountable. Within days of the food tax cut’s approval, he was on his way to California to be sworn in as Santa Ana’s city manager, a hiring decision made at least in part because of his reputation as a budget wiz.

Cavazos’ revenue estimates “were horrendous,” Phoenix Councilman Jim Waring said in an interview with Voice of OC. “I thought David did a lot of good work, but this was not a great moment for the city when my colleagues had to go and explain… most blamed him in retrospect.”

Now in charge of Santa Ana’s $200-million general fund budget, Cavazos is again offering rosy revenue projections that are at odds with previous estimates by other experts.

Before Cavazos came to Santa Ana, the city’s consulting firm, Management Partners, had determined the city would be facing a year-to-year budget deficit through fiscal year 2018-19 — and that was under even the best of three scenarios outlined in a 2013 report.

Yet, just after a year on the job, Cavazos produced a new forecast showing year-to-year surpluses of over $10 million annually, a figure he cited in his recent failed attempt to secure a $15,750 bonus on top of his more than $500,000 compensation package.

And like in Phoenix, a significant factor in Cavazos’ surplus is revenue estimates that have been revised upward.

Acknowledging the skepticism, Cavazos said in a Voice of OC interview that he’s been called a “magician.” He credited his new forecast to “hope and inspiration,” an improving economy, and an innovative leadership style coupled with a City Council ready to make hard choices.

Those are familiar refrains for Phoenix officials, and sources familiar with the budgeting process in that city say his revenue projections should have received more scrutiny. They point to several red flags with the way Cavazos put together budgets: for example, Cavazos removed costs embedded in labor contracts – like salary hikes known as cost of living adjustments (COLAs) – from the Phoenix forecast.

But perhaps most alarming, one source asserted, was that Cavazos would deliberately mislead officials when it came to trimming costs. If presented with a bullet list of cuts needed to achieve $20 million in cost reductions, Cavazos would implement only some of the measures, but still claim he trimmed $20 million, the source said.

“You can’t say we’re going to fix a $20 million budget hole by doing nothing,” the source said. “It’s math, not magic. It just doesn’t work that way… it became obvious that we were building a house on cards that wasn’t going to stand.”

Regarding revenues, Phoenix leaders and the city’s newspaper acknowledge that projecting a more than 7 percent revenue increase in a place like Phoenix, which was hit much harder during the Great Recession than Orange County, was a bad idea.

“We now know the consequences of budgetary happy-think,” the Arizona Republic’s editorial board wrote last September. “Phoenix now has been hit with the ugly consequences of shortsightedness two years running. It is time to come to grips with more realistic expectations and budget from there.”

On that point, Cavazos hasn’t been nearly as aggressive with his revenue growth projections in Santa Ana as he was in Phoenix. He only bumped up the projected revenue increase from 2 percent to 3 percent, and it is based on actual revenues from the last fiscal year that were better than expected.

In fiscal year 2012-13, Management Partners estimated that the tax base would total $140.9 million. The city actually realized $146.5 million in tax revenue by the end of the fiscal year, according to financial records provided by the city.

And when applying that 3 percent projection to an already higher-than-expected revenue base, growth looks much better than Management Partners had foreseen.

“The economy’s growing, we’re in the middle of Orange County, and we need to have a revenue forecast that I think is more consistent with the growth patterns as I see them based on financial information, based on my intuition, and based on where I think the city of Santa Ana is going,” Cavazos said.

On the cost side of the forecast, Cavazos said he included all the costs that were agreed to in labor contracts, including promotional pay increases. But what he didn’t include, which Management Partners did, were possible COLAs for employees that might be negotiated into the next round of labor contracts.

There isn’t unanimous agreement on this method. Some finance experts said it’s not bad practice to leave out salary increases that are likely to occur, but haven’t been agreed to yet.

Others said it doesn’t conform to their ideas of best practices.

“I will say that it’s quite unusual to project a budget five years into the future assuming nobody’s going to get a salary increase,” said Philip Joyce, professor of public policy at the University of Maryland and editor of the publication Public Budgeting and Finance.

“If you do something like that then the effect that would have is quite likely to understate what the future costs would likely be and therefore make your surplus look higher or deficit look lower.”

Cathy Standiford, a former Santa Ana assistant city manager and partner with Management Partners, said she couldn’t comment on the new forecast because new circumstances might have led Santa Ana officials to alter the picture. But she said Management Partners’ forecast was realistic and that “it’s probably not practical to assume employees are never going to get a pay increase.”

Cavazos, meanwhile, said that city employees should not assume they wouldn’t get raises just because he didn’t include COLAs in his forecast. In fact, he stated that now that the city has the funds, employees would be getting raises within the next two fiscal years.

“All the rank and file people…get ready brothers and sisters, because you’re going to get some raises,” Cavazos said. “They deserve it. They worked really hard.”

Cavazos said he took raises out of the budget forecast because of the initially projected deficit – raises are rarely given during times of budget cuts – and also because he doesn’t agree with including costs that aren’t yet agreed to in union contracts.

He also touted his credentials with local budgeting, which include 27 years of experience and a masters of science in public policy from Carnegie Mellon University.

“If you promise everything and nothing happens, guess what happens in city management? You get fired.” Cavazos said. “I don’t think anybody would have graduated from Carnegie Mellon… with raises over and above what you’re contractually obligated, when you have no forecast that supports it.”

Cavazos and city staff also hustled to lower costs and increase revenue by renegotiating federal detainee holding contracts for the city jail, modernizing the utility users tax so the big businesses would continue paying it, and adjusting overtime in the police department to save more than $2 million.

For the most part, Santa Ana City Council members say they have faith in Cavazos. But one, Councilwoman Michele Martinez, has begun to raise concerns publicly.

Martinez says Cavazos is taking credit for a budget forecast that looks good because of better-than-expected growth and hard choices the council made before he arrived. And she said Cavazos hasn’t yet made tough decisions like paying down the city’s unfunded liability and setting aside money for repairs to parks and City Hall, which she said is “falling apart.”

“It’s my hope he’s going to take those ideas and make them real,” Martinez said.

But an optimistic budget forecast, regardless of who gets the credit, can be a self-fulfilling prophecy. In Santa Ana, its already allowed the city to refinance bonds at lower interest rates, going from approximately 5 percent on the city’s police building debt to about 3 percent, according to Finance Director Francisco Gutierrez. That alone saves the city millions annually.

“3 percent is Triple A brother. Triple A,” Cavazos said.

But here also, there’s another parallel with Phoenix. When Cavazos was at the helm in Phoenix, the city had that perfect rating. But soon after he left and the budget deficit appeared, the Standard and Poor’s rating agency downgraded Phoenix to AA+.

When asked to comment on the situation in Phoenix, Cavazos denied that bad revenue estimates had anything to do with the city’s budget woes, or that there are any budget woes at all.

Instead, he pointed to how he turned around a $277 million deficit after being appointed city manager there in 2009. He insisted Phoenix budgets are good and healthy, but also insinuated that, if there are problems, it’s because he’s no longer city manager there.

“After I left, the new [Phoenix] city manager made changes, and based on those changes, they have new budgets. Their budgets are good. It’s a very healthy city. They maintained their credit. They provided more services. So Phoenix is doing fantastic,” Cavazos said.

When asked again about questions regarding his revenue projections in Phoenix, he claimed, correctly, that Phoenix’s revenues have been growing — but he didn’t address the shortfall in his growth estimate.

“Revenue keeps going up, they might have an expense issue, or they might have an innovation issue. But I can’t comment on that, because they’ve got great management,” Cavazos said. “I’m focused on Santa Ana, if you want to ask a question about Santa Ana, that’s great. If I were back in Phoenix I think I would still be doing a good job there too.”