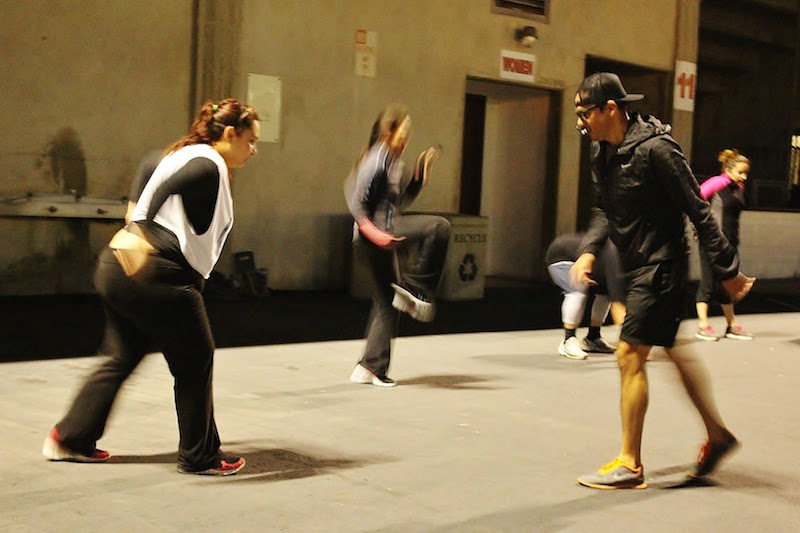 Caitlin Whelan for Voice of OC

Marc Payan (right) works with a participant in one of his morning workouts at Santa Ana Stadium.

With the booming hip-hop music and bouncer sporting a leather jacket and hoodie, the pre-dawn scene at Santa Ana Stadium could have, at first glance, been mistaken for an all-night rave.

But the 250 or so people gathered together at 5 a.m. on a recent Wednesday weren’t ending a night of excess — they were beginning their day with Payan X, Santa Ana’s burgeoning exercise phenomenon.

The free community workouts, which feature volunteer trainers, draw between 100 and 450 people to the stadium on Mondays, Wednesdays and Fridays, and have become part of a community health awakening of sorts in Santa Ana.

They are the brainchild of Marc Payan, who came up with the concept of creating a community-based exercise group while he was running the OC Half Marathon in 2011.

At the time, Payan was working on losing the last of the 100 pounds he had gained over just a few years, and was inspired by another runner who shared his life struggles and successes during the two-hour race.

“This is what it’s about. Having this deep conversation and running with 19,000 people,” Payan thought. “I wanted to recreate that marathon.”

He started with a couple of friends in the garage of his Irvine home. In just two weeks, the group had grown to 30 people.

“The classes create a context to be one-on-one together. People give each other support,” said Payan. “Dreams are realized when you walk with others.”

Each session is different and designed to train participants of all ages and physical conditions. They include high-intensity, function exercises from mountain climbers to squats. The participants warm up together and then break up into smaller groups for circuit training and other team-formatted workouts.

By January 2013, Payan had relocated the program to Santa Ana — and it was becoming so popular so fast that it kept out growing its venues. The first workout took place in an alley between Third and Fourth streets; by May of that year he moved to a parking structure rooftop; and finally to Santa Ana Stadium in January 2014.

The move to Downtown Santa Ana was intentional. Payan had been working there in the non-profit sector for about a decade, and many of Payan X’s participants were coming from Santa Ana.

In Central Santa Ana, 68 percent of residents live below the poverty line, putting the predominately-Latino community at a higher risk of obesity and diabetes. And most low-income people can’t afford gym memberships.

The City of Santa Ana lends the stadium to Payan rent-free for two hours, three days a week; and he relies on local business owners to donate space for leadership meetings. He’s currently looking for a place to park the group when his lease with the Santa Ana Stadium ends in August 2016.

“There’s always a fear that the city is going to come in and shut us down,” said Payan.

Payan’s vision for community-oriented exercising has coincided with a years-long effort among local nonprofits in Santa Ana to boost awareness of neighborhood health issues.

A centerpiece of the effort is a proposed wellness district that will go before the Santa Ana City Council tonight.

In January, a council committee passed a 19-point resolution that includes a “health and wellness outcomes assessment,” efforts to preserve city’s Latino identity, and incentives for businesses that offer wellness goods and services.

“[Payan X] has brought a lot of momentum here,” said Santa Ana Councilwoman Michele Martinez, who listed several exercise facilities that have either expanded or opened since Payan X started. “If you bring people together to share a space and live a healthy lifestyle, it’s contagious.”

While the concept might be new to Orange County, community exercise todos juntos is not uncommon in other parts of the world. Payan has witnessed the phenomenon in some of the world’s most dense cities including Moscow and Hong Kong.

“You’re designed to do hard things and your not meant to go at life alone,” Payan said. “You’re meant to do things in a tribe.”

The Payan X ethos rejects the hyper-fit flashiness often seen in gyms like 24-hour fitness or other trendy exercise studios.

“It’s not about working out, but working it out,” said Payan. “You could get the abs — but they’re gone in a week. I always tell people they are better off taking a course in Photoshop.”

The 5:15 a.m. start time is also important, Payan said. The darkness makes participants feel less self-conscious and find safety in the large crowds, and the class is over before the sun comes up.

Saturnino Ramiris, who lives a few blocks from the Santa Ana Stadium and walks to each session, has been attending Payan X for three months, three days a week.

“I never come to gym,” said Ramiris, who said the workout allowed him to get to his job at 8 a.m. “When you have stress, your stress goes out. I feel better.”

Francisca Leal the program director at Latino Health Access (LHA) said there are a handful of barriers preventing Santa Ana residents from gaining access to exercise — some of which the Payan X workout is removing.

And some apartment complexes are cracking down on courtyard activity by placing signs that have rules like: no running, no skateboarding.

“It’s almost like they are saying you cannot even exist,” said Leal in reference to the restrictions facing Santa Ana residents.

LHA shares a similar mentality with Payan X: in order for a participant succeed they need support of a community.

“Obesity has a lot of friends,” said Leal.

With participants numbering as high as 449 per session, many are surprised that Payan X is still free.

Payan said he’s sometimes tempted to charge and has had offers to turn Payan X into a money-making venture. But ultimately, he believes he could not create this kind of community if money was a factor.

Dedicated volunteers work with Payan, who covers any costs with his own checkbook. Purchasing equipment was made possible with donations.

“If you create a space and make it free, you cut the barriers out,” said Payan.

At the same time, he does worry that the no-payment method is unsustainable.

“It’s a slippery slope. Without resources you can’t do this very long,” said Payan. “This always needs to be free, but people need to know why it’s free.”

Celina Centeno, who lives across the street from the Stadium, hopes Payan can find a long-term solution. She began attending Payan X three times a week when her two daughters Emma and Arianna asked her to tag along. The workout soon became routine mother-daughter time.

“I went to the gym before they were born,” said Centeno. “But I got discouraged when people would show off.”

Arianna Centeno, Celina’s daughter, said: “when we have this morning with our mom, we are a lot happier.”

Jenny Cain can be reached at [email protected].