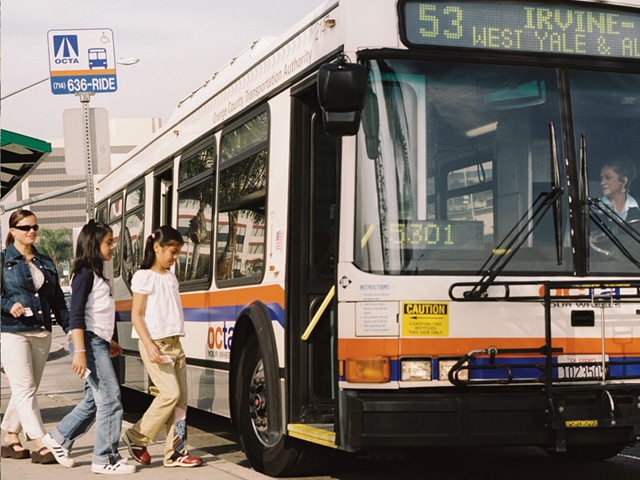 Attempting to obtain that information during the scoring process was “highly irregular and unethical” and violated both federal and local contracting guidelines, Darrell Johnson, Transportation Authority CEO, wrote in a letter to the firm, Dallas-based MV Transportation Inc.

Johnson’s letter, which was obtained by Voice of OC, doesn’t name the agent, but sources familiar with the situation identified her as Susan Withrow, an ex-Mission Viejo councilwoman and former Transportation Authority board member who is now a lobbyist for the company.

According to sources, Withrow is part of an MV Transportation lobbying team that also includes Curt Pringle & Associates and Roger Faubel, two of the most influential political lobbyists in the county.

At stake is a contract worth between $140 million and $160 million to provide bus services for up to 40 percent of the agency’s fixed routes by 2016, according to a Transportation Authority staff report. The agency has been outsourcing an increasingly larger share of its bus operations, and currently 28 percent of the fixed routes are contracted out, the report states.

MV Transportation is the current provider and has been since 2009. But the contract was put out to bid and a ranking committee gave a competitor, Cincinnati-based First Transit Inc., a higher score. The committee based its evaluation on four criteria – price, work plan, staffing and project organization, and qualification.

The committee scored First Transit higher in every category. And First Transit’s bid, at $143.4 million over four years, came in substantially lower than MV Transportation’s $154.2 million proposal, according to the staff report.

But in a response letter to Johnson, Kibby denied the allegations. He said company officials spoke with the agent “in question,” and confirmed that the agent didn’t intend or try to obtain the confidential information.

“We at MV [Transportation] understand the serious obligation we have to maintain the highest ethical standards in all that we do and regret that you were left with a contrary impression,” the letter reads.

How the allegation of improper lobbying will affect the contract award is unclear, but at this point it doesn’t look like MV Transportation’s bid will be disqualified.

Transportation Authority board Chairman Jeffrey Lalloway said he is waiting to hear from the board’s transit committee and more information from staff before he makes up his mind on which firm should get the contract.

“Part of what makes [the Transportation Authority] successful is the committee system,” Lalloway said.

When asked whether MV Transportation should be disqualified, Lalloway said the CEO’s letter was “an appropriate action” and that if others have a different opinion, “they can bring it up at the board meeting.”