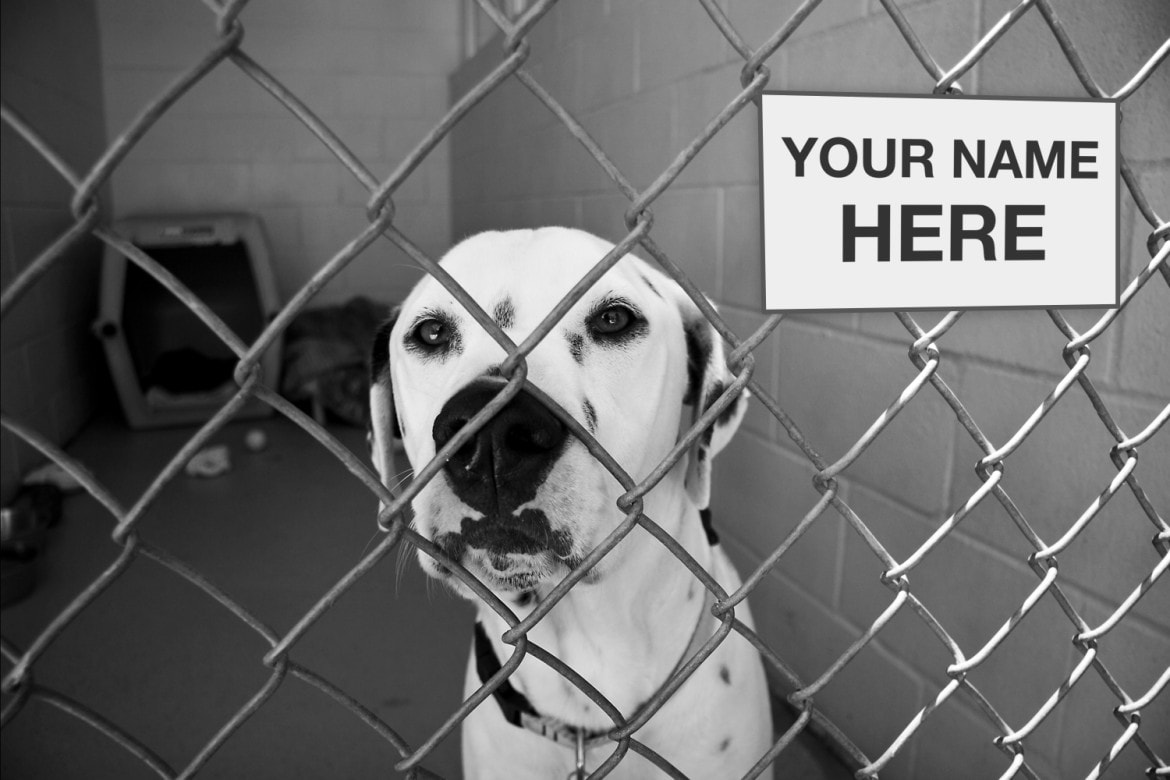 Photo illustration by Voice of OC

The county animal shelter's kennels could feature corporate sponsorships, under a proposal presented by top officials. (Photo illustration by Voice of OC based on photo by Flicker user reana; Creative Commons license)

Orange County could pursue corporate sponsorship agreements for its animal shelter, libraries, and events like health fairs, under a new policy that came before county supervisors this week.

The proposal, which drew both excitement and concern from supervisors’ Chairman Todd Spitzer, opens up the possibility of the county making millions by selling sponsorship rights for items ranging from dog shelter kennels to hygiene kits the county hands out to homeless people.

An unspecified company has already approached the county offering to help pay for pet food if it receives public recognition, officials say.

Spitzer praised the idea as a creative, outside-the-box approach to government.

“This item is some of the best county work I’ve ever seen. It is really cutting-edge, it’s innovative, I’m excited about it,” Spitzer said during the board’s regular meeting Tuesday.

But at the same time, he cautioned that there needs to be clearer guidelines for how staff would be asking for funds from companies, such as those competing for county contracts.

“I have to tell you I am really, extremely concerned about people asking people for money or goods,” Spitzer said.

Among other things, Spitzer said the rules should include whether donation requests can happen on county property and whether contractors in a bidding process can be pulled aside for donations.

Responding to Spitzer’s concerns, OC Community Resources Director Steve Franks, who is requesting approval for the proposal, said he hasn’t yet figured out where and how staff would be soliciting sponsorships.

Supervisor Lisa Bartlett joined Spitzer in expressing support for the sponsorship concept overall, saying it will, for example, help cover some of the costs for staffing the animal shelter.

A government ethics expert, meanwhile, says there are several things county officials should consider before taking such a step.

They include whether officials would feel an extra obligation to sponsors on unrelated issues in the future, like zoning approvals for a new headquarters, said Tracy Westen, the former CEO of the Center for Governmental Studies in Los Angeles.

The full details of any deals with sponsors should be disclosed, and ideally brought before a public meeting for approval in order to give an opportunity for scrutiny, Westen added.

“The [county] should say, ‘We’re doing such and such, we’re taking these pet foods that we’re getting for free…and in exchange we’re giving free ads,'” he said.

Additionally, he said that if future county decisions arise related to a sponsor, it would be a good idea to for past sponsorships above a certain threshold to be disclosed for the public.

The idea of corporate sponsorships isn’t unique to Orange County.  The state governments of California, New York and Georgia, for example, received corporate donations in recent years to help pay for their financially struggling park systems.

“Most of these efforts come with recognition — on a playground sign, on a park pass — of the corporation’s contribution,” reported Governing magazine.

Regarding pet food at Orange County’s shelter, Franks said more than $100,000 is currently spent on it, a cost that could be shared with a corporate sponsor.

And Franks has even higher ambitions, saying in his proposed marketing plan that as much as $1 million could be raised in sponsorships at the animal shelter alone.

Those sponsorships could include buildings, kennels, signs within the shelter, public service materials, ads on community outreach vehicles, adoption events and pharmaceuticals.

At county libraries, sponsors could be recognized through promotional items like bags, bookmarks, pencils and ads on the outside of vehicles, under the proposed libraries marketing plan.

And within the county’s community services department, companies could sponsor promotional materials like pill boxes for older adults, hygiene kits for homeless people and portfolios for unemployed people.

There was concern raised by supervisors about whether all proposed sponsorship deals would be brought to them for approval. For example, the libraries’ marketing plan has no requirement for board approval, Spitzer said.

Franks said county attorneys have told him he does need to bring these deals to the board for approval, though supervisors said that needed language to be added to the marketing plan.

At Spitzer’s urging, supervisors held off on deciding about the issue until changes are brought forward at their April 14 meeting.

He cautioned that the rules still need to be cleaned up – something he plans to work on with Bartlett before the proposal comes back for approval.

“I think this has huge potential, but man if we don’t get this right, we could really step in it.”