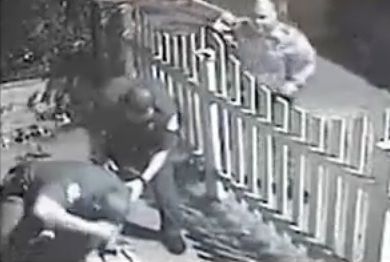 A federal grand jury has launched a review of last year’s beating of an undocumented man by Santa Ana police officers, according to attorneys for the city.

The move comes amid a U.S. Department of Justice civil rights investigation into the June 2014 beating and arrest of Edgar Vargas-Arzate, which the FBI has described as an assault by officers.

In April, he filed a federal lawsuit against the city.  The city responded in June by seeking to have the case put on hold pending the grand jury investigation.

“Presently, we are informed that there are ongoing federal grand jury proceedings investigating the incident and the officers’ use of force during the incident,” states the city’s court motion.

The inquiry isn’t expected to last more than four or five more months, it added, indicating that a decision on whether to indict the officers would come by sometime in November.

Spokespeople for the FBI and Santa Ana Police Department said they couldn’t comment on grand jury investigations.  The development was first reported by the Orange County Register on Thursday night.

Federal grand jury proceedings are typically cloaked in secrecy, with an announcement usually not coming until a decision is made on whether to file an indictment.

Vargas-Arzate’s arrest last June attracted national media attention after video footage was made public showing the Vargas place his hands up and lie face down in a front yard before police began repeatedly punching him, swinging a baton at his legs and shooting him with a Taser gun.

The police officers claimed self-defense, saying Vargas-Arzate attacked them as they were responding to a burglary call in the central part of the city, and pursued felony charges against him for assaulting an officer, causing great bodily harm and resisting arrest.

Then, in August, federal immigration agents arrested Vargas-Arzate while he was on his way to Orange County Superior Court to defend himself against the charges.

The case took another turn when the FBI later confirmed that a civil rights investigation had been opened into the police officers’ actions, which prompted Vargas-Arzate’s release from federal custody. And local prosecutors dropped all the charges against Vargas-Arzate except for attempted burglary.

Then, in October, FBI officials vouched for Vargas-Arzate as a victim of “felonious assault” by the officers when they submitted a certification for a visa that would allow him to stay in the U.S.

Upon hearing the news regarding the grand jury investigation, Vargas-Arzate’s public defender, credited the work of federal authorities who have been on the case.

“The FBI was outstanding in how thoughtful and thorough they were in our conversations,” Bittar said.

“Multiple eyewitness testimonies and a video tape, in this case, certainly reveals that there was obvious police misconduct,” he added. “And we’re mindful that across the country video has been critical to cases.”

Bittar was surprised at the news of the grand jury probe and acknowledged that he’d developed an impression lately that the investigation had stalled.

“We made Edgar available to them for an interview, but we never got any indication that there was interest in interviewing him,” Bittar said before learning of the grand jury proceedings.

FBI spokeswoman Laura Eimiller said all she could confirm about the civil rights investigation is that it is ongoing.

The case, and his time behind bars, has taken a huge toll on Vargas-Arzate’s mental health, Bittar and his family have said.

“Edgar is a very vulnerable person, and I know there’s very little political will to assist somebody with a criminal record, but by the same time he is a person that we have to try to protect as well,” said Bittar.

Grand juries allow prosecutors to bring evidence in secret before jurors, who then decide whether charges should be filed.

They are often used in cases of alleged excessive police force, such as the death exactly one year ago of New York City resident Eric Garner.

In that case, which featured video of Garner in a police chokehold just before his death, a local grand jury declined to indict the officer.

The use of grand juries in police use-of-force cases has drawn criticism because the proceedings are secretive and don’t feature some of the cross-examination and evidence rules of normal court proceedings.

On Thursday, the state Assembly passed a bill that would ban the use of grand juries by local prosecutors in police lethal force cases.

In Vargas-Arzate’s case, a hearing on the city’s motion is scheduled for 8:30 a.m. Tuesday in the Santa Ana federal courthouse.