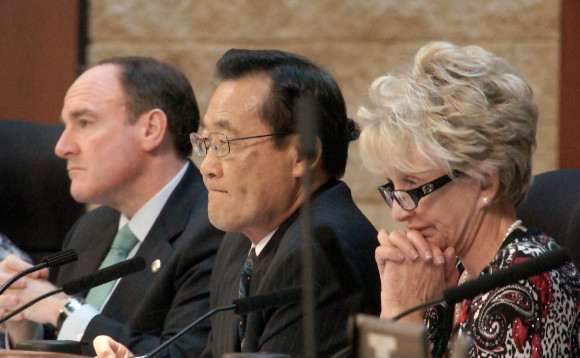 The Irvine City Council Tuesday night decided to emblazon “In God We Trust” and “e pluribus unum” – Latin for “out of many, one” — in the council’s meeting chambers, a nod to national mottos championing both faith and the country’s multicultural identity.

The agenda only called for a vote on “In God We Trust,” but Councilwoman Lynn Schott proposed having both mottos after several public speakers said installing such a phrase would alienate residents who are atheists or have a faith that isn’t God-centric.

The vote was 4-1, with Councilwoman Beth Krom, the council’s only Democrat, voting no.

The decision puts Irvine in line with many Orange County cities that already have the motto displayed in their council chambers, and represents another step the Republican council majority has taken to make City Hall more conservative — both in policy and now aesthetic — after years of a majority Democratic city council.

Other public speakers and members of the Republican council majority, including Mayor Steven Choi, who first proposed having the motto, said it was an important reminder to the city’s children about the principles of faith held by the country’s founding fathers.

“It’s simply honoring our national motto and our national trend, so we can come under the respect of our heritage,” said Choi, who is known to be a deeply religious Christian.

Others disagreed. Krom said that, while courts have ruled it constitutional, it makes people who don’t share faith in God uncomfortable. And a city like Irvine, which is home to faiths and cultures of various stripes, should strive for more welcoming messages.

“I would like to know what public interest will be served by doing this other than jumping on a bandwagon I don’t think we should be jumping on,” Krom said.

It’s unclear where exactly the mottos are going to be displayed in the council chambers, or if they’re going to be placed together or separately. City staff will be working with Choi and Schott on the design and bringing it back to council for approval at a future meeting.