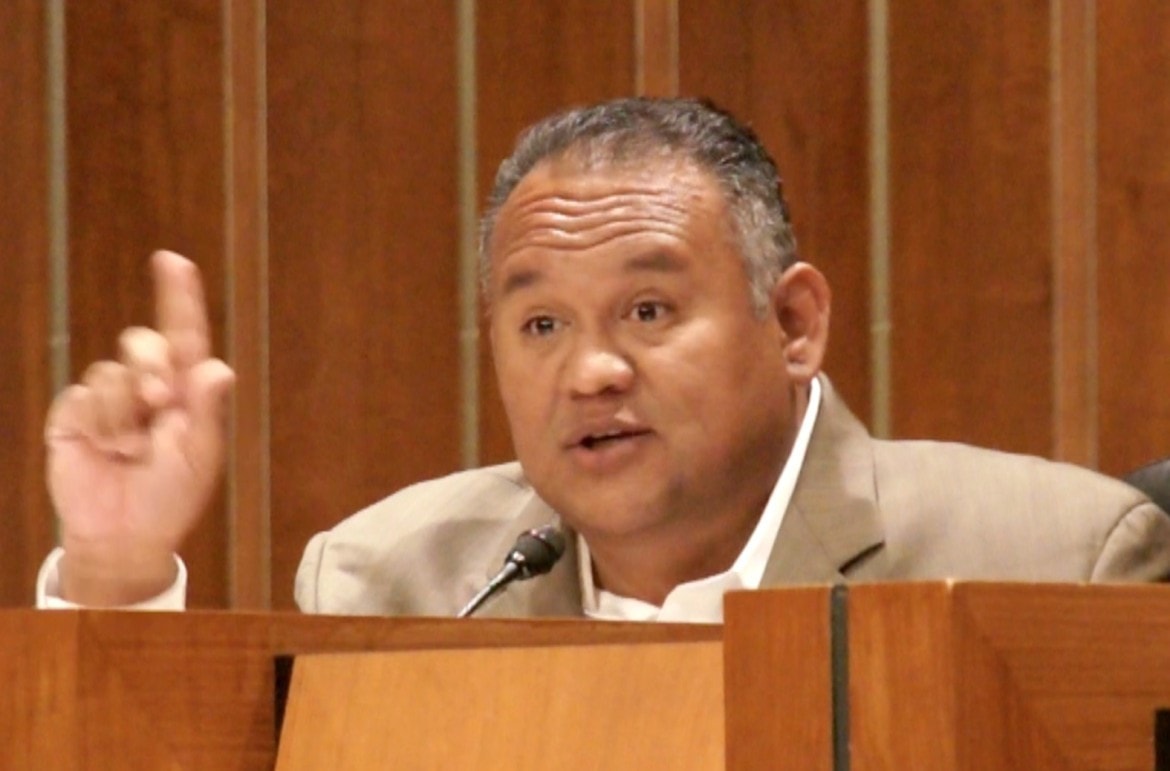 At times over the past several months, Santa Ana Councilman Sal Tinajero has promoted himself as a local government consultant to the medical marijuana industry and received thousands of dollars in payments from one or more pot shops in the city, according to multiple sources with knowledge about the transactions.

Several sources interviewed by Voice of OC, some on the record and others on condition of anonymity, described Tinajero’s various contacts with medical marijuana stores in Santa Ana, and characterized his actions as influence peddling.

It’s widely known that the three-term councilman has been the council’s most outspoken champion of allowing and regulating medical marijuana in the city, having led the council effort to place a measure on last year’s ballot that would allow some pot shops to remain open.

Recently, Tinajero’s efforts seem primarily focused on helping the stores expand into neighboring cities, the sources said. He spoke in favor of regulating medical marijuana shops at public meetings in Westminster and Costa Mesa, and asked to meet with Stanton officials on behalf of pot shops that had apparently hired him, according to Stanton Councilman David Shawver.

Sources say payments to Tinajero have been in cash, which is not surprising given that medical marijuana collectives are usually all-cash operations because banks are reluctant to take deposits from businesses that are still considered illegal under federal law.

The revelations regarding Tinajero come as a federal lawsuit filed last month alleged that Mayor Miguel Pulido and other unnamed city officials have financial ties to pot shops and are directing police campaigns to shut down competing stores.

And as Voice of OC reported last month, Doug Lanphere, a marijuana industry insider, claimed he was at a meeting where Pulido promised to appoint a pot shop owner to a medical marijuana city committee in exchange for campaign cash.

Almost as soon as news of the lawsuit broke, Pulido denied the allegations as “unequivocally and categorically false.”

Tinajero, who is a teacher and debate coach at Fullerton Union High School, has declined to speak on the record about the suit or his consulting work, citing the ongoing litigation.

“[Tinajero] was basically telling people that he was working with other cities and he could help get them into other cities,” Lanphere said. “Now if that ever came to fruition I don’t know.”

‘These Guys Have Deep Pockets’

In April, a Voice of OC reporter witnessed Tinajero publicly advocating for allowing medical marijuana stores at a Westminster City Council study session. Other than Westminster officials and Tinajero, all the other attendees were employed by dispensaries.

Tinajero told council members during public comments that it would be cheaper to pass a regulatory scheme to allow stores to operate rather than shut them down, because the shops are willing to pay large amounts in fines to stay open. He represented himself as a Santa Ana councilman and didn’t disclose that he had been a paid pot shop consultant.

“These guys have deep pockets,” Tinajero said at the meeting.

In Stanton, Shawver said Tinajero mentioned to him in passing that he wanted to meet with Stanton officials about their medical marijuana policies. Tinajero left the impression that he was working with a group of dispensaries in some sort of professional capacity, Shawver said.

But Shawver said he didn’t want anything to do with the pot business because, like Tinajero, he’s been a high school teacher for decades and witnessed its negative effects on children.

“I know exactly what happens with the stuff,” Shawver said. “I think we should have a Las Vegas style casino before we have medical marijuana.”

It’s also unclear whether Tinajero had been receiving income from dispensaries while he was participating in council actions to allow and regulate the industry. But he has cast many such votes over the last several months.

And this year, he’s voted to accept police department updates on efforts to shut down illegal medical marijuana operators. He also voted in May to hire an outside attorney to fend off legal challenges from dispensaries that didn’t win chances to apply for a permit under the city’s pot shop lottery, and he voted  in April for a contract increase for the accounting firm that conducted the pot shop lottery.

He was absent for a vote in February to spend $880,000 to step up enforcement against pot shops.

Despite Tinajero’s increasingly apparent ties to the industry, it doesn’t appear on the surface that his votes violate the state’s conflict of interest law, known as the Political Reform Act, because they affect the industry generally, said Bob Stern, co-author of the 1974 law.

“The question is are any of his votes helping his clients specifically, as opposed the industry generally,” Stern said, adding that “it raises the question of his being involved in an industry that is sort of burgeoning in Santa Ana… he’s going to have to be very cautious in the future to make sure he doesn’t have any legal conflicts.”

Still, enforcement is the primary concern of dispensaries that both won and didn’t win chances to apply for permits. Shops that did win are keen on the city shutting down the competition and, if they do have right to apply for a permit, remain open during the process.

And although both Pulido and Tinajero voted at the May 19 council meeting to approve the legal contract for representation in pot shop lawsuits, both also recused themselves from a closed session council meeting during which medical marijuana was discussed, according to Councilwoman Michele Martinez.

Councilman David Benavides’ remembers his colleagues recusing themselves around the the time the topic came up, but couldn’t be sure. He said Tinajero’s consulting work was “news to me,” adding that the main question is whether council members’ personal income legally conflict with their council duties.

“So long as there is no true conflict. That’s the main thing. Everyone needs to make sure they’re above board,” Benavides said.

In an interview before the federal lawsuit was filed, Tinajero said city leaders decided to implement a random lottery for operating permits, run by an independent consultant, after rumors began spreading that Pulido was promising pot shops help with securing locations in the city.

“We wanted to be perfectly clear that neither the mayor nor the Santa Ana City Council had any influence in the process,” Tinajero said.

Reporter Thy Vo contributed to this article.