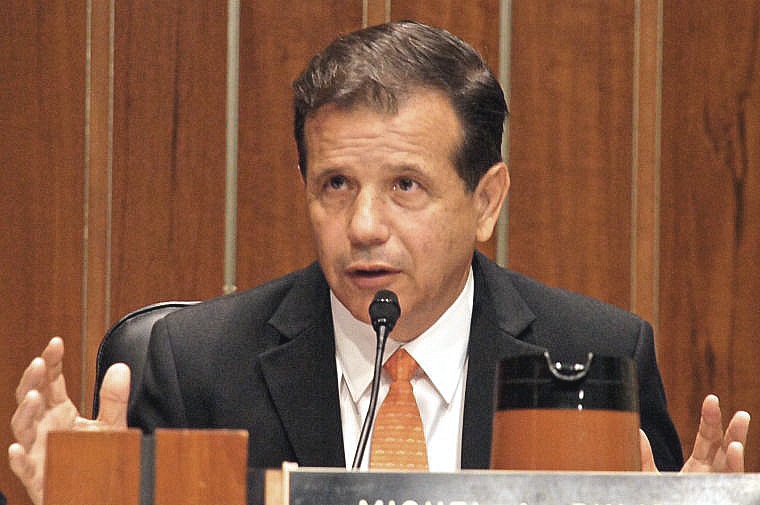 Santa Ana Mayor Miguel Pulido and other city officials have financial ties to certain medical marijuana dispensaries in the city and have been directing police to shut down their competitors, according to a federal lawsuit filed Monday morning.

The suit — filed by attorney Matthew Pappas on behalf of the Sky High Holistic marijuana collective and others — also alleges that unnamed individuals involved in the campaign to pass a voter-approved measure to allow and regulate some shops, known as Measure BB, promised operating licenses to marijuana dispensaries in exchange for $25,000 contributions.

Furthermore, according to the complaint, some time between June and August 2014, Pulido and other unnamed city officials enjoyed “limousine services, expensive dinners and shows, currency and gifts from individuals and entities seeking to establish control over the Santa Ana marijuana market.”

It also alleges that between August 2014 and this month, Pulido received “financial benefits” from a medical marijuana shop in the city and “intervened to warn that collective when [city] action was pending, was observed at the collective and intervened with police officials on behalf of the collective.”

Pulido and City Attorney Sonia Carvalho did not return calls for comment from Voice of OC. In an interview with the Orange County Register, Pulido said the accusations in the suit were “unequivocally and categorically false.”

Since the passage of Measure BB in November, the city has taken aggressive steps to regulate the booming local pot shop industry. As part of the process, city officials held a lottery in February, with the 20 winners having the right to apply for a city permit to sell medical marijuana.

Pappas’ lawsuit joins several other suits aimed at overturning Measure BB, which is currently barred from implementation under a court-ordered temporary restraining order. Pappas is best known for having successfully fought a court battle against Long Beach and invalidating that city’s pot shop lottery.

He alleges that Santa Ana’s lottery system is “utterly corrupt,” and violated his client’s right to due process.

In addition to allegations that Pulido and city officials received money from a lottery winning dispensary in exchange for favorable treatment, the process was essentially tilted toward wealthier dispensaries, because applicants could purchase an unlimited number of lottery spots so long as each application was submitted under a different entity. The city charged $1,690 per application.

Sky High Collective did not submit an application for the lottery, according to Pappas.

In recent years, dozens of shops were selling marijuana in the city. And since the passage of Measure BB, City Council members approved extra funding for the police and city attorney’s office to shut down marijuana stores deemed to be illegally operating. The suit alleges that the officers have been heavy handed, shutting down water and power, and raiding collectives while wearing masks.

The suit comes just after a massive controversy triggered when Pappas provided video clips to Voice of OC and other media outlets allegedly showing police officers eating food laced with marijuana and seized during a police raid on the Sky High Holistic collective.

That video also shows a policewoman mocking marijuana patient Marla James, an amputee and plaintiff in the suit, saying that she should have kicked the woman in her “fucking nob,” as well as officers knocking down security cameras.

After Pappas filed his lawsuit, he held a press conference at The Westin hotel in Long Beach, where he fielded questions from a throng of TV news reporters.

Reporters expressed some skepticism about Pappas’ allegations, asking what specifically the attorney had as evidence to support his claims regarding Pulido, and other claims that the police had done $100,000 in damage to the Sky High Collective during their raid.

Pappas said Pulido received cash from an unnamed medical marijuana dispensary in the city. But he wouldn’t offer any other specifics about the evidence he might have against Pulido except to say it consisted of witness testimony and documents. He also said he’s provided information about Pulido to the federal government, though he didn’t name the specific agency.

A reporter asked if Pappas was requesting that Orange County District Attorney Tony Rackauckas investigate his allegations regarding the mayor. Pappas said he would “suggest” such an investigation, but also mentioned that the DA’s office has some “issues” with Pulido.

He also referenced the DA’s disqualification from prosecuting the Scott Evans Dekraai mass shooting case after evidence of prosecutorial misconduct came to light.

The “issues” Pappas was likely referring are that Rackauckas has relationships with known Pulido supporters, including the mayor’s criminal defense attorney, and recently cleared Pulido of any criminal wrongdoing in his land swap with a city contractor.

Pulido admitted to six counts of violating state law related to the land swap and paid $13,000 in fines to the state’s political watchdog.

“I believe action needs to come from the federal government on [Pulido’s ties to dispensaries],” Pappas said.

Steve Downing, a retired police officer who attended the press conference with Pappas, also questioned why police officers would go to a state Superior Court in Fullerton to obtain their warrant to search the Sky High Collective.

Downing referred to another video clip that purports to show a police officer joking about the judge who signed the warrant, John Fish, and saying that he and Fish drove to Staples Center in Los Angeles together. They stopped at an ampm store to buy beer and pour into red cups, the officer says.

“Maybe the judge next door wouldn’t have signed the warrant. I don’t know,” Downing said.

This isn’t the first time Pappas has alleged that Pulido has financial ties to the medical marijuana industry. In a letter to Pulido dated April 10, obtained by Voice of OC, Pappas alleged Pulido had financial interests in dispensaries and that his actions to shut down the competition “very likely violate the federal Racketeer Influenced Corrupt Organizations Act (‘RICO’).”

The letter goes on to say: “It all sounds like an attempt by either operators approved in the utterly corrupt lottery process or even city officials to maintain a monopoly on dispensaries in which they have a pecuniary interest or stake.”

Pappas’ allegations, which have been circulating for some time, have come to the attention of Carvalho.

“I understand that you have told several people that you have information indicating that elected officials in the city of Santa Ana have business relationships with one or more medical cannabis dispensaries operating in the city,” Carvalho wrote in an email to Pappas on June 8. “Do you have documents or names of people that can substantiate these allegations? If so, would you feel comfortable sharing this information with me or outside law enforcement agencies?”