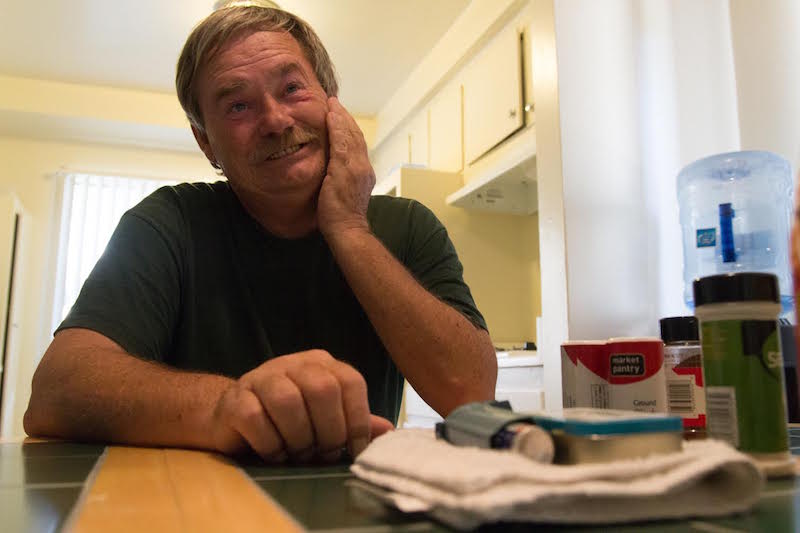 Donald Meade, the beneficiary of a new approach to helping homeless people with chronic illnesses, in his new apartment in Fullerton. (Photo by: Phuc Pham)

There’s not a lot of furniture at Donald Meade’s sunny new one-bedroom apartment in Fullerton, but it’s a place he’s proud to call home. He shares his new digs with a sweet-tempered, mixed-breed puppy named Scrappy.

Until recently, Meade was living on and off at downtown Santa Ana’s Civic Center, along with hundreds of other homeless people. The 54-year-old Army veteran has battled addiction, cancer and chronic heart problems, which often led him into a vicious cycle of emergency room visits, hospitalizations and more illness.

His path out of chronic homelessness came to him by way of the Irvine-based Illumination Foundation, which is finding success with a new approach to helping sick, chronically homeless people that also saves millions of taxpayer dollars in medical expenditures.

The approach, dubbed “housing first,” focuses on placing people a home, and then offering the psychiatric and logistical services that would help them improve their health and well-being.

This is contrary to the traditional approach, which has been to try to get chronically homeless people housing-ready by working with them to overcome health, addiction or mental health problems first.

However, changes in federal health and housing policies have made it easier to give the idea of housing first a try. And with housing-first policies paying off in cities like Salt Lake City, the policy is gaining traction.

The Illumination Foundation’s housing-first program expanded on its pioneering work to combat the tragic consequences of “patient dumping,” which is the practice by some hospitals of literally discharging homeless patients onto the streets with no follow-up care.

Through the program, called Chronic Care Plus, the Illumination Foundation identified homeless people being discharged from hospitals and gave them a place to recuperate and medically stabilize. Then patients were placed in apartments, where they received follow-up help from mental health and substance abuse specialists.

The foundation reports that all 24 chronically homeless people who completed the pilot program are now in stable housing, with medical costs to three area hospitals reduced by 84 percent, or $2.8 million, over one year. However, Illumination Foundation officials contend the actual savings are almost three times that amount, because other hospitals provided care to participants but declined to disclose treatment costs.

By comparison to the $2.8 million saved in on year, the cost of operating CCP was far less – about $373,000. Individually, some patients reduced their annual emergency room costs by hundreds of thousands of dollars.

But beyond cost savings, other benefits of the program emerged. The lives of participants who stayed with the program are demonstrably better, said Paul Leon, CEO and president of the Illumination Foundation. He noted the program’s effectiveness in places like the Santa Ana Civic Center, where homeless regularly congregate.

“We’ve already taken 18 people out of the Civic Center, some of them severely mentally ill,” Leon said. “One of clients was literally chasing cars. She’s in housing now, working part time. I can’t even believe it’s the same lady. She’s taking her meds, living in an apartment on disability.”

Meade is another Civic Center resident to benefit from the medical stabilization of CCP’s recuperative care followed by permanent housing with continuing support.

Meade doesn’t wish to return to sleeping on the sidewalks but with his declining health and numerous medical procedures he sometimes feels a desire to leave his creature comforts behind. He has contemplated going to the mountains to “let nature take its course” and says with resignation that, “I’m tired of fighting with cancer and my heart problem.”

He praised his case worker at the Illumination Foundation, however, and said he frequently urges other Civic Center denizens to inquire about the program. But some of his homeless acquaintances are reluctant to take the steps needed to change their lives, he said.

Homeless people commonly face chronic and complex health challenges that lead to emergency room visits. Consider a person afflicted with type 2 diabetes, which frequently leads to wounds that are easily infected and re-infected on the street.

“Someone with a wound care problem needs dressing changes, needs to be clean,” said Ginny Ripslinger, vice president of Network Care at St. Joseph Health, a partner with the Illumination Foundation on the CCP program. “He has to have access to antibiotics, also treatment plans.”

Permanent housing with ongoing support services, in contrast, makes it possible to “focus on improving health habits rather than looking for a place to sleep and find food,” Ripslinger said.

Additionally, a high percentage of chronically homeless have problems with mental health or substance abuse; two thirds of Chronic Care Plus participants had a history of both, as well as numerous incarcerations.

Chronic Care Plus came about when UniHealth in Los Angeles, a philanthropy focusing on hospitals, provided the foundation $400,000 over two years to improve the health and housing prospects of the 20 most expensive users of St. Joseph Hospital’s Emergency Department.

Altogether, the foundation recruited 38 chronically homeless people facing medical challenges; 14 of these eventually left the program, and 24 completed it.

UniHealth President Mary Odell said recuperative care can foster a connection between caregivers and chronically homeless people, who might otherwise refuse assistance if approached on the street.

“You need to give people a reason to come in and a reason to trust. A good way to do that is to meet an immediate need. In case of people on streets a long time, sometimes that’s a medical need,” Odell said.

After providing recuperative care, the Illumination Foundation secured public assistance for the CCP participants who qualified and contacted landlords willing to accept them as renters. Some of the participants obtained housing vouchers through the U.S. Department of Housing and Urban Development, which in recent years has embraced a the “housing first” approach.

The Affordable Care Act plays a role in homeless care by allowing low-income single people to enroll in Medi-Cal, and by fining hospitals for readmitting patients who were dumped without follow-up treatment.

Chronic Care Plus’s results and cost savings are dramatic, but whether they hold up over the long term has yet to be seen.

Meanwhile, advocates of recuperative care and long-term housing still face an uphill climb in their efforts to convince the establishment that their approach is worth pursuing.

Illumination Foundation officials have had to scramble to fund their work and to persuade hospitals to pay for recuperative care, even though it is a fraction of the cost of repeat visits to the emergency room and hospitalizations.

Another issue is whether charitable efforts to ameliorate the hardships of life on the street sometimes undermine long-term goals to get people permanently housed.

For example, numerous church and student groups routinely bring food to homeless people at the Civic Center. One charitable group even serves pop-up gourmet meals to Santa Ana’s homeless. But feeding alone, though well-intentioned, is not always helpful, said Leon of the Illumination Foundation.

“I would argue this with anyone. I heard it best said by a nun at a conference on homelessness. She said, ‘If you are still feeding people in a park, shame on you.’ What happens is it makes them dependent on that food,” Leon said. “Now that we’ve come so far with shelter and caring for the homeless, the days of the PB&J ministries are long gone. We’re past that. With just a little bit more effort you can connect people to true housing.”

On a recent Sunday afternoon, a homeless woman named Tina and her daughter were lying on a blanket on the Civic Center grounds. They said there had been at least six “feedings” at the Civic Center already that day. Numerous sack lunches, Vietnamese sandwiches, water bottles and soda cans were piled on the corners of their blanket. Tina was grateful for the food but had nowhere to store perishable items, she said.

While the feedings relieve an immediate problem, the people who organize them should try to work with the organizations seeking permanent remedies to homelessness to reinforce their efforts, said Odell of UniHealth, the funders of CCP.

“Feeding programs are a charity. They’re trying to ameliorate an immediate need. Philanthropy is strategic and looks at root causes and long term solutions,” she said. But the two can work in tandem, she added: “One can exist beside the other.”

Amy DePaul is a Voice of OC contributing writer and lecturer in the University of California, Irvine Literary Journalism program. You can reach her directly at [email protected]