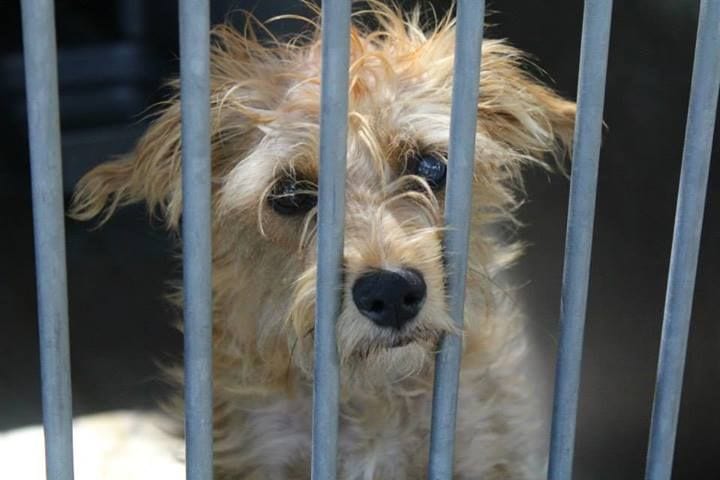 A dog that at one point was in the Orange County Animal Shelter. (Photo credit unknown)

Orange County’s existing and lone animal shelter was built as a “pound” during World War II. It is too small and has become dilapidated and insufficient to serve the amount of people properly which it currently contracts to serve.

Five Grand Jury Reports have been issued on the shelter. The three earlier reports shined a light on the aging facility. The last two, May and June 2015, pulled no punches and were by far the most revealing.

For close to 20 years, the county has been promising to build a new animal shelter. Now the Board of Supervisors’ response indicates completion of a new shelter will be approximately 2019. But that date is still predicated on transfer of the property in Tustin, which was once occupied by the Marine Air Corp Station, to the county.

“Do you know how many innocent lives — mostly kittens — will be snuffed out in 4 years, said animal advocate, Dr. Cheryl Cuttineau. “I shudder at the thought.”

In fact, all the animal advocates have the same concerns.

Why should we even believe the Supervisors this time? Their history of unfulfilled promises tells us their estimates are meaningless. In fact, dates seem to change every year and go back as far as 1999.

Let’s look at a few statements in the county’s response:

1) “The current delays in building a new shelter are not due to lack of effort, commitment or prioritization.”

Advocates have been complaining about these very things for many, many years.

You can’t solve a problem, if you don’t admit you have one and an Einstein quote reads: “We can’t solve problems by using the same thinking we used when we created them.”

There is a paradigm shift taking place on how we see animals, but the Board of Supervisors have refused to acknowledge it and change their thinking. The lack of support and attention to the aging facility by the Board, present and previous, reflects their old thinking, period!

So advocates countywide have been turning to some of the 18 cities, which currently contract with the county for animal services. They are asking cities to withdraw from the county and join with neighboring cities to build their own pro humane animal shelters, conveniently located, humane and something of which they can be proud.

2. “Despite the delay, the Tustin site remains the generally preferred site for the County and the contract cities.”

This statement is untrue! As far back as 2001, North County contract cities were very concerned about the increased distance to a new location in Tustin. So much so, La Habra and Buena Park left the Orange County shelter system and Brea is now seriously considering leaving and partnering with other North County neighboring cities to build their own pro-humane animal shelter.

Then there are the South County cities who had a private donor willing to give $1 million dollars to build a new satellite shelter closer to their residents, if only the county would supply the land. But the county said NO and instead has a 120-acre resort-like county prison expansion in progress on that property at the “doorstep” of Lake Forest residents and 5 miles from a large community of senior citizens.

Now, since this last Grand Jury Report, Lake Forest, Rancho Santa Margarita and Laguna Hills are seriously considering a feasibility study which would indicate leaving the county and partnering with other South County cities is the wisest and most prudent action for providing convenient and proper animal services to their constituents.

It’s hard to believe out of the entire county, the Tustin property is the only land where a regional county shelter could be built. In fact it is not, but the Board of Supervisors continue to extort money from the cities based on that premise and hold the Navy responsible for delays in releasing the Tustin property to the county!

I know, for instance, there is vacant county property south of the Great Park which is commonly called the “100-acre site”. Back in 2003, a list of potential uses for the acreage listed an animal shelter. But the county changed its mind and instead wants office space, residential units and a 242-room hotel and tapped Lowe Enterprises in early 2014 to lease and develop the land.

According to the OC Register, the county also owns about 44 acres at the northeast edge of the Great Park, across Alton Parkway and the James A. Musick Facility. A wildlife corridor splits the land into two parcels, on which the county has proposed building 970 multifamily units, up to five stories tall.

3. “The remaining balance in the set-aside fund (for design and construction of a new county shelter) is now $4.4 million”

Yes, the county has been dangling this money over the heads of contract city officials since 1996. But bear in mind, contract cities will be required to contribute the balance of the construction costs of a new animal shelter, when and if that ever happens.

This is not the case in neighboring counties.

4. “Contract cities expressing” this or that.

As far as I am concerned, this is hearsay. Representatives from 6 of the 18 contract cities, known as the Financial/Operational Advisory Board or FOAB, (which advises the Director of the animal shelter on financial and operational matters and communicates with the OC City Managers Association) do meet with county representatives bi-monthly at the county animal shelter. However, as pointed out in the Grand Jury Report, no minutes are taken during the meetings and I know meetings are not open to the public. Therefore, there is no way of substantiating anything that is supposedly “expressed” at these “mystery meetings.”

5. “Morale problems caused by poor management and leadership….contributing factors include the high workload, high vacancy rate, an aging facility……” and specific management personnel who had created a “toxic environment”

Because the Supervisors felt the Grand Jury did not support this claim sufficiently, they pretty much white-washed over this issue. They failed to take responsibility for their part in the high workload, high vacancy rate and an aging facility and should have because those factors are due to their failure to remedy the underfunding, understaffing and replace the inadequate shelter.

Morale is a state of mind which involves feelings and emotions and affects productivity. In government service, it can be more difficult to resolve, especially when you are working for politicians. (Protect your bosses at all costs)

Add on top of that the fact that you are dealing with life and death situations and are responsible for the care of living beings, animals, can lead to burn out. Not feeling supported or respected (not heard), and poor working conditions is fertile ground for morale problems.

If multiple employees are identifying the same individual as toxic, there needs to be action taken immediately. According to Forbes magazine, some people don’t have that “managerial gene” and 46 percent upper-level managers from around the world fall short. Even if he/she is a good worker, don’t make the rest of the other employees suffer. Find some other responsibility for him/her.

6. “The County is also exploring the concept of regional ‘Adoption Centers’, which involves placement of multiple satellites throughout the County as a complement to the centralized regional Animal Shelter.”

In April 2014, animal advocates met with OC Community Resources Director, Steve Franks and then OC Animal Shelter Director, Ryan Drabek. Several of the Supervisors as well as the FOAB leaders were invited but chose not to attend. The meeting was facilitated by Voice of OC Publisher, Norberto Santana. The date for completing a regional animal shelter was still not firm. Mr. Franks agreed to look into satellite adoption centers.

Fast forward six months, the condition of the county shelter was worsening and there was no date for a satellite adoption center either. Animal advocates felt they had been down this road before and began looking to contract cities, but this time for satellite animal shelters run by the cities themselves.

One large regional animal shelter would not be as effective in providing proper care of animals, (statistics prove it) or be convenient for most Orange county residents, that is if it ever gets built in Tustin. As we watch the massive development taking place in Orange County, and the increase in traffic, we can see smaller animal shelters would better serve North and South County residents.

According to Ms. Logan, her lawsuit “forced change in a number of the shelter’s policies and procedures and forced the shelter to comply with several State and Federal Mandated Laws which the shelter was not doing or adhering to.” She believes this will result in “making positive changes for animals under OC Animal Care.”

The most rewarding event at a shelter, is seeing a lost animal returned home or going to his/her newly adopted forever and loving home. Until that time the facility should be a safe shelter and “we” are called to act as stewards of these animals.

So, I am very glad the Grand Jury reported on the shelter, for if it had not, I doubt that some of the overdue repairs or issues would have been addressed. The Orange County Grand Jury found evidence of only one inspection ever conducted at the 74-year-old county animal shelter.

If being fiscally conservative was the only requirement, we could have robots for politicians. Hopefully we have some city officials in the contract cities who are also wiser and compassionate and will do the right thing.

Voice of OC is interested in hearing different perspectives and voices. If you want to weigh in on this issue please contact Voice of OC Engagement Editor Julie Gallego at jgallego@voiceofoc.org.