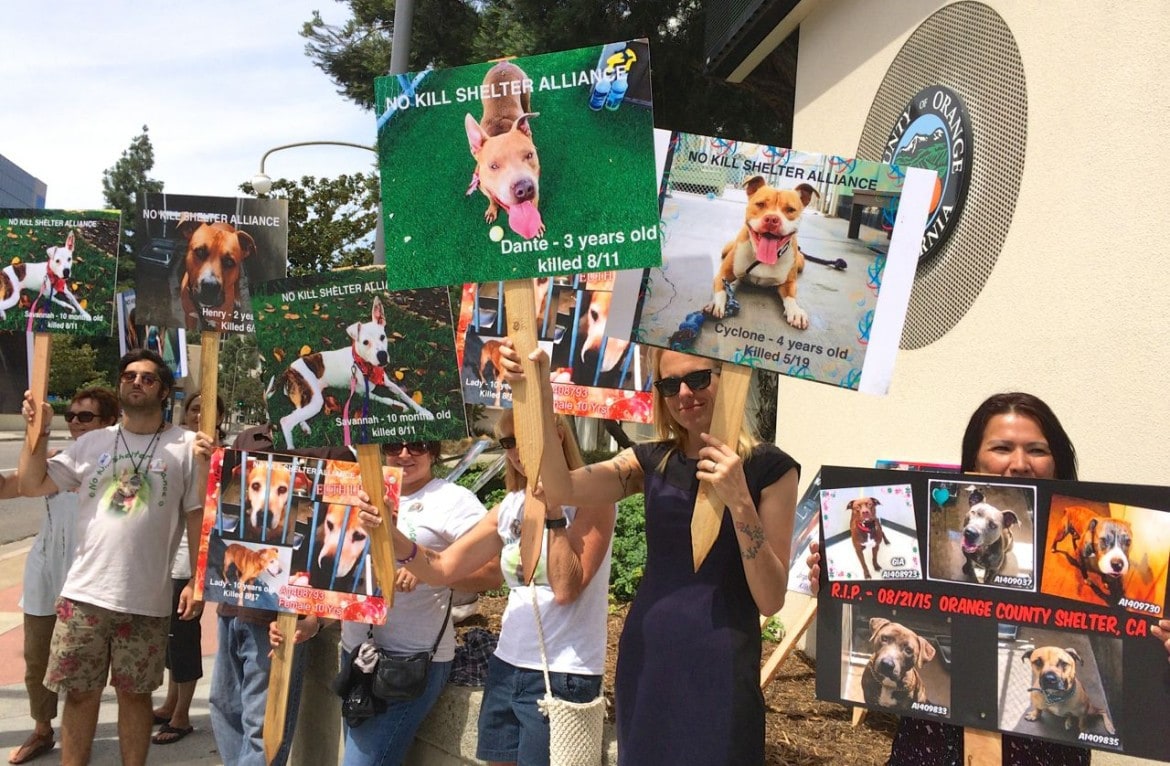 Activists protested conditions at the county animal shelter Tuesday in front of the county Hall of Adminstration.

On a day when Orange County supervisors were slated to officially respond to grand jury reports slamming the county animal shelter’s management, more than a dozen animal advocates showed up to the supervisors’ meeting to join the grand jury’s scathing criticisms and urge major changes.

Conditions at the shelter are so bad, said rescue volunteer Sue Walsh, that animals rescued from there have to get hundreds of dollars of treatment.

“They all get sick because they’re not kept in sanitary conditions,” Walsh told supervisors Tuesday, echoing grand jurors’ observations.

Animals have also been euthanized for improper reasons, advocates said, like being “too timid,” or “not social enough for adoption.”

“They killed a 10-month-old dog because they labeled it ‘bratty,’ ” said Sharon Logan, an animal rescuer who recently settled a lawsuit against the county.

Among other things, the advocates demanded progress on building a new shelter, which has been promised by the county for over a decade but is still not close to being a reality.

“You should be building, tomorrow, a South County animal shelter” next to Musick jail, said Lake Forest Councilman Jim Gardner, noting that the county already owns that land and has set aside millions of dollars for a new shelter.

Echoing other advocates, Gardner added that supervisors should immediately establish an independent committee to study the shelter issues, “so we don’t have continuous grand jury reports and unhappy citizens.”

During the meeting and afterwards, the activists took their protest to the streets. About 15 people gathered at a street corner in front of the county Hall of Administration, with many holding signs featuring photos of dogs that have been euthanized at the shelter.

The activists’ actions came as supervisors approved the county’s official responses to the grand jury reports.

The first report noted that the 74 year-old shelter is in a state of “utter disrepair,” with health of animals and people alike are being put at risk while top county officials fail to take leadership on building a new facility.

The second grand jury report declared that poor management has contributed to problems like rat infestations at the county shelter and dead animals being left near homes for days after being reported to animal control.

The situation is so bad, jurors wrote, that the county should consider replacing the leadership of the animal services agency and the county’s community resources department, which oversees it.

In their official responses to the reports, supervisors disagreed with many of the findings and rejected most of the recommendations.

For instance, regarding serious morale issues among animal services staff, the response acknowledges the issue but disagrees with the grand jury’s finding that much of it is due to “poor management practices and lack of effective leadership.”

Instead, the response attributes it to other issues like a high workload and employees “being subjected to intense external scrutiny which perpetuates false information about OC Animal Care.”

After the activists spoke Tuesday, supervisors acknowledged that there are still problems and said they’re serious about improving conditions at the shelter and building a new facility.

Supervisor Lisa Bartlett said things aren’t “perfect” at the shelter, but that they’re getting better. She added that she felt the grand jury reports blew many things out of proportion.

“We are working very diligently as a board,” Bartlett said. “We care, and we want to do the right thing.  And just, be patient and continue to work with us.”

Chairman Todd Spitzer, meanwhile, said many of the critiques are valid. “We have been getting a lot of criticism.  A lot of it is deserved,” he said.

County officials reported that they have about $4.5 million set aside for a new shelter and are moving forward with plans for construction, but that the Navy hasn’t transferred the site at the former Marine Corps base in Tustin.

As for euthanasia practices, the shelter’s director said the policy is to only put down animals that have health or behaviors that are beyond staff’s ability to manage. Euthanasia rates are down to less than 6 percent this year, said Dr. Jennifer Hawkins, a figure that was met with skepticism from advocates.

Spitzer also expressed concern about what happened to Logan, who was prohibited from rescuing shelter animals after posting a video showing a shelter staffer forcing a dog into a cage to be euthanized.

“If somebody has a gripe with our government, they have a right to redress” and shouldn’t be “persona non grata,” Spitzer said.

In response to the residents’ requests, Spitzer asked county CEO Frank Kim to study whether alternative locations would work for a new shelter site, and to give a timeline of when sites would be available.

Spitzer also said the county needs to be more receptive to the public when it comes to the shelter. “We need some kind of regular input,” he said.