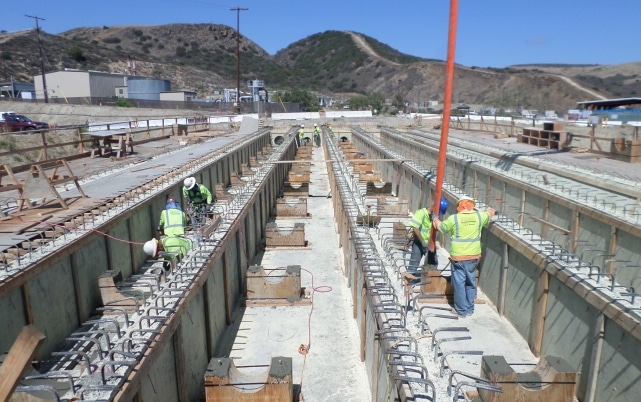 Workers work on building a bridge in May as part of the La Pata Ave. extension project.

As construction work continues on the $127 million La Pata Ave. extension in South Orange County, county supervisors’ Chairman Todd Spitzer says the private development that’s largely benefitting from it should be contributing more towards its funding.

Spitzer recently noted that when the county reached its funding agreement with the Rancho Mission Viejo Company in 2004, officials expected a parallel toll road – the SR-241 extension – to accommodate much of the new traffic from the 14,000-home Ranch Plan development.

But the toll road project was abandoned last year after environmentalists, surfers and other advocates successfully lobbied state and federal officials to turn down the project, amid concerns about impacts to wildlife and recreation, including plans to have the road run through part of San Onofre State Beach.

“La Pata is gonna end up being…the solution to carrying all the traffic in that portion of the world between Antonio [Parkway] and Ortega [Highway],” said Spitzer, who represents parts of South County like Irvine and Trabuco Canyon, during the Sept. 22 county supervisors meeting. “And I’m real concerned about it.”

“La Pata was not intended to be” the main road between Ladera Ranch, the Ranch Plan developments and the I-5 freeway, he added.

The developer’s Ranch Plan calls for 14,000 homes and over 5 million square feet of commercial space on undeveloped land east of Ladera Ranch and San Juan Capistrano.  Some of the homes are already occupied, though most of the plan has yet to be built.

Due to its location in unincorporated county territory, the area’s land use, building permits, transportation projects and infrastructure taxes fall under the county’s control.

As of 2013, Rancho Mission Viejo was to chip in $25 million for the La Pata project, with another $16 million coming from a tax on future residents and businesses in the development, for a total of $41 million.

The other $51 million was to come from taxpayer funding outside of the area, such as county-wide road funds and the county-wide Measure M2 transportation tax.

But the project’s cost has grown from earlier estimates.  And the county now has a $40 million funding gap to fill, according to county Public Works Director Shane Silsby.

“When I see the amount of money going into La Pata” the county will have have to borrow “at the peril of other projects that are just as pressing, it bothers me,” he said “At the same time, you can’t say to these people, welcome to your neighborhood, but by the way don’t back out of your garage” because you can’t get anywhere.

Spitzer suggested the development agreement, which calls for some of the La Pata project to be funded by future residents through extra taxes, needs to be re-examined.

That idea, however, was met with resistance from Supervisor Lisa Bartlett, who represents most of South County, including the project area.

“I really would be very hesitant at this point to try to go back and renegotiate the development agreement,” said Bartlett, pointing to the possibility of lawsuits and delays.

“We have a number of [tax districts] in the future that are going to come forth” for this project and the county should focus on those instead of looking back at the past, she said.

But Spitzer has leverage in the debate.

He’s a crucial swing vote on approving much of the Ranch development’s infrastructure funding, which is done through tax increases on residents and businesses in the area.  It’s known as Mello-Roos taxes or community facilities districts.

They require approval by four out of five supervisors to move forward, and Supervisor Michelle Steel has consistently voted against them as they come up. That gives Spitzer the opportunity to be in the driver’s seat.

“They are one vote away from no new [community facilities district],” Spitzer said Tuesday of the developer.  “They need to pay for the infrastructure new housing is creating or that area will have permanent gridlock.”

The exact amount the developers are currently required to contribute to the La Pata Ave. costs could not be determined Tuesday, as neither Silsby nor Rancho Mission Viejo representatives returned calls seeking comment.