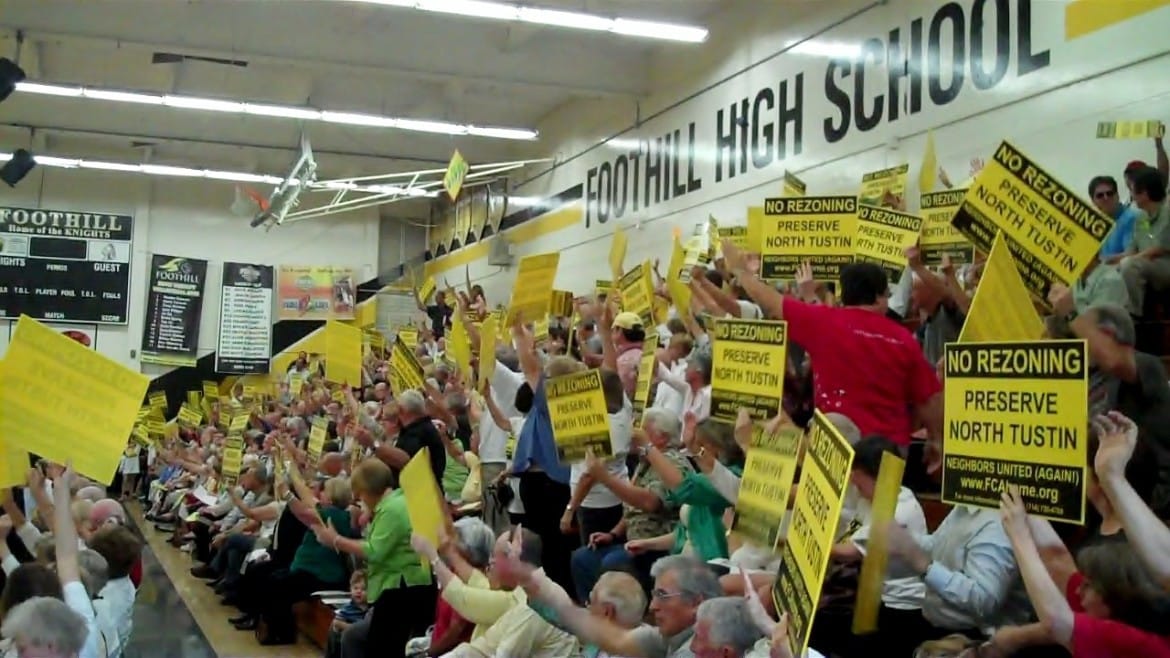 Orange County’s board of supervisors is slated to rule on an amendment that would restore the integrity of the North Tustin Specific Plan, during its Dec. 15 meeting. Championed by Third District Supervisor Todd Spitzer, and supported by North Tustin’s Foothill Communities Association (FCA), the amendment would remove the designation, “senior residential housing,” from a seven-acre plot on Newport Blvd.

That designation was created exclusively for that parcel in 2011 and exists nowhere else in the county. The acreage is owned by the Catholic Diocese of Orange, who, along with Kisco Senior Living planned to develop a three-story, multi-unit retirement community on the property.

At that time, however, the North Tustin Specific Plan (NTSP) designated the entire area as single-family residence, restricted to 100–foot-wide lots. Multi-family units or commercial enterprises were disallowed on the diocese’s parcel. To accommodate the diocese and the developer, county planners skirted the multi-family restriction by inventing “Senior Residential Housing” (SRH) and recommending the NTSP be amended to include it. The board of supervisors, under the leadership of Bill Campbell approved the Kisco development and the NTSP amendment to include the senior residential housing element.

The FCA, representing homeowners in the North Tustin area, argued against the one of a kind designation, claiming that it violated the intent of the specific plan to preserve the single family, character of the neighborhood. Residents also noted that if the county believed the 1982 NTSP was no longer useful, then the entire document should be studied, discussed at public meetings and updated with the participation of all stakeholders.

FCA challenged the county’s piecemeal modification to its specific plan with a lawsuit. A lower court judge agreed with the community, calling the SHR designation “illegal spot zoning.” That judgment was subsequently appealed by Kisco and the diocese and the appellate court found that the isolated designation was not “spot zoning.”

When Todd Spitzer was elected to take over third district representation from Campbell in 2012, he promised his constituents in North Tustin that he would do what he could to restore the community’s specific plan to its original form and therefore preserve its overall intent.

In January of this year, Spitzer convinced his board colleagues to direct county planners to revisit the north Tustin plan and craft an amendment that would undo the SHR zoning and return the non-spot-zoned parcel to single family residential. The composition of the board has changed since 2011. The only current member who was seated when the vote to approve the development occurred is Shawn Nelson. Nelson was the only member of Bill Campbell’s board who voted “no.”

Build it and they will come

The County Planning Commission rejected the restoration of the NTSP when it heard the issue Nov. 9. At that commission hearing, the room was populated with representatives from the diocese, Kisco and a handful of senior citizens. Public testimony focused on the need for senior housing in North Tustin and the negative message sent to builders if the county reversed an entitlement it had previously approved. “It will send shockwaves through the building industry,” one speaker advised.

A few North Tustin residents defended the amendment and stressed the community’s desire for the county to uphold the original intent of the specific plan. One speaker noted that when the senior development was first proposed, 98 percent of neighbors surveyed opposed it.

No one addressed the real issue – that is, that the amendment was drawn up to right a wrong perpetrated on North Tustin property owners in 2011. Specific plans are legal documents created to ensure that future land use remains compatible with the area. Homeowners count on specific plans to preserve their quality of life and protect the environment that surrounds their property.

Death of a thousand cuts

Since the North Tustin plan was revised to suit a developer, other specific plans governing county islands have been under fire. Former supervisor Campbell championed a number of changes to the Foothills Trabuco specific plan to allow a 65-unit development to be built on Santiago Canyon road. County planners scrapped grading limitations, reduced lot sizes, removed oak tree protections, redefined “open space,” and underplayed traffic impacts on the two-lane canyon road. The amendments virtually eliminated the FTSP’s primary goal to preserve the rural character of the area. The county also added a “precedence clause” to the general plan to give supervisors the power to ignore any inconvenient requirement of any specific plan when approving new developments.

Trabuco canyon residents filed a lawsuit and won in the lower court. As with North Tustin, however, the appellate court reversed the decision, giving the board authority to interpret the “intent” of a specific plan and modify it at will. Homeowners governed by specific plans in Orange Park Acres, Santiago-Modjeska, North Tustin and Foothill-Trabuco have since asked Spitzer to do what he can to protect their land-use documents from the whims of future boards of supervisors.

The North Tustin amendment was heard by three planning commissioners and denied by a 3-0 vote. The commission currently has one open seat and member Cameron Irons was absent that day. Ironically, Irons was the sole commissioner to vote against the senior residential housing amendment four years ago.

Voice of OC is interested in hearing different perspectives and voices. If you want to weigh in on this issue please contact Voice of OC  Publisher Norberto Santana at [email protected].

Voice of OC has a media partnership with the Foothills Sentry, established in 1969, and a monthly newspaper that covers the communities of North Tustin, East and Central Orange, Silverado and Modjeska Canyons, Orange Park Acres and portions of Anaheim Hills. Richards is the Editor of the Sentry.