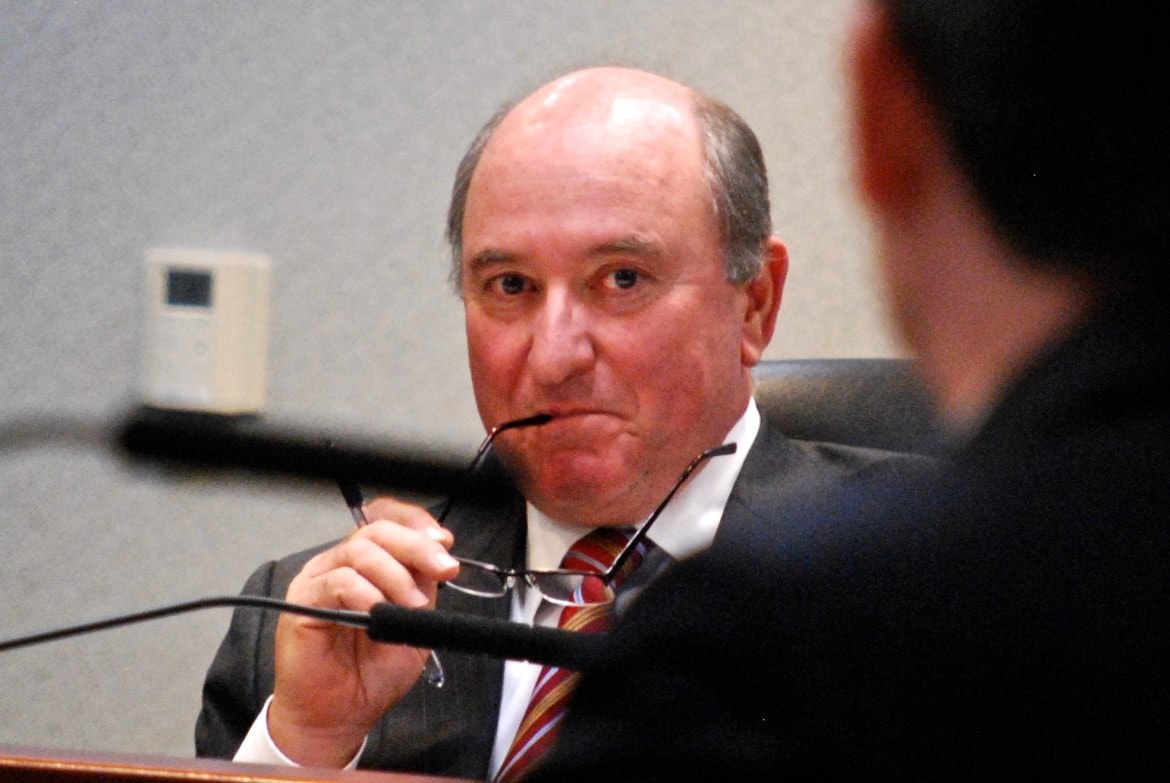 The policy committee of the Rancho Santiago Community College District’s Board of Trustees will be reviewing travel and gift rules following a Voice of OC investigation that revealed how top officials took thousands of dollars in gifts from district contractors and traveled in luxury on taxpayers’ dime.

District leaders announced the move at Monday night’s regular meeting of the Board of Trustees at the district’s headquarters in Santa Ana. While they promised to consider reform, they also suggested that Voice of OC’s three-part series on the district was sensationalized and contained inaccuracies. However, they didn’t offer specifics.

The Voice of OC investigation found that trustees overbilled the district on hotel nights and meals on trips to conferences by asking for reimbursement on such expenses days before the events took place. It also found district leaders billed the district for things like airline seat upgrades, private limo rides and expensive suites at luxury hotels, among other issues.

The articles also cast light on how companies doing business with the district lavished gifts on Peter Hardash, the vice chancellor of business services who also recommended nearly $12 million in contracts with the same vendors, at times within days of receiving gifts. The gifts consisted mostly of rounds of golf.

And finally, the series highlighted top officials’ compensation, including the fact that some trustees – specifically John Hanna, Phil Yarbrough and Arianna Barrios — take the most expensive health benefits of any community college trustee surveyed by the state controller’s office.

Chancellor Raul Rodriguez began his remarks on the series, the first time he’s publicly addressed the issues raised in the articles, by mentioning positive coverage the district had received in a building trades magazine.

“We’ve had some not so good publicity lately,” Rodriguez said afterward. “Criticism is important to pay attention to, even if we think the criticism isn’t true, or fair, or on the point.”

Rodriguez encouraged trustees not to have a “knee jerk reaction” to the articles and said that, despite how the reporting portrayed the district, they should find ways to turn the criticism into something “constructive.”

He suggested that the Board of Trustees’ policy committee, chaired by Hanna, review the district’s travel policy and possible rules on taking gifts. Currently, the district has no gift policies in place.

“I think it’s important to have a measured response to the criticism that’s out there,” Rodriguez said.

Hanna thanked the chancellor for his suggestion and said while there’s no “preordained solution,” the policy committee would be reviewing a possible gift ban, ethical practices and oversight of travel bills. He also promised that they would look at trustee travel, which he said is about 5 percent of the district’s travel costs, in addition to the other 95 percent.

However, no one mentioned reviewing health benefits or other compensation for top officials.

Hanna had also attended a Voice of OC open house last weekend showcasing the series. About 40 people attended the event, and some grilled Hanna for the issues highlighted in the articles.

At the event, Hanna gave a mea culpa and said he had “failed” in his oversight duties, but also said the article on travel failed to provide context, including the resources and knowledge trustees bring back to the district while travelling. He also said Hardash likely wouldn’t be disciplined because there were no gift policies in place, but acknowledged a need to reform a district culture where taking excessive gifts from contractors is seen as normal.

Claudia Alvarez, who was appointed board President that night, said that the Voice of OC series had “stuff that’s just not true” and was overblown. But beyond that, she said it highlighted an accountability issue. District officials need to watch their receipts to make sure expenses don’t become a public embarrassment, she said.

“While we get those policies in place, I do encourage people to use their better judgment,” Alvarez said, adding that it was “unfair” to students and district officials for the agency’s reputation to “be tainted by something as trivial as a golf game.”

Alvarez and other district leaders emphasized that the district has been doing good work that isn’t highlighted in the media. Among other things, Rodriguez referenced the Santa Ana College student newspaper, El Don, having recently won Associated Collegiate Press (ACP) National Pacemaker Awards.

All of the talk regarding trustee travel didn’t stop the board from approving a list of conferences trustees could attend at district expense, including up to $3,100 per trustee for the annual National Association of Latino Elected Officials conference. At the NALEO conference earlier this year, Trustee Jose Solorio stayed at a 1,000 sq. ft. suite at a five-diamond hotel in Las Vegas, costing over $400 per night.

Wrapping up her remarks, Alvarez encouraged district leaders to keep up their spirits.

“Even if you get nasty-grams through articles that are half truths, I want to tell you I’m very proud of the work you do,” Alvarez said. ”We’re going to go ahead have a blast in 2016.”