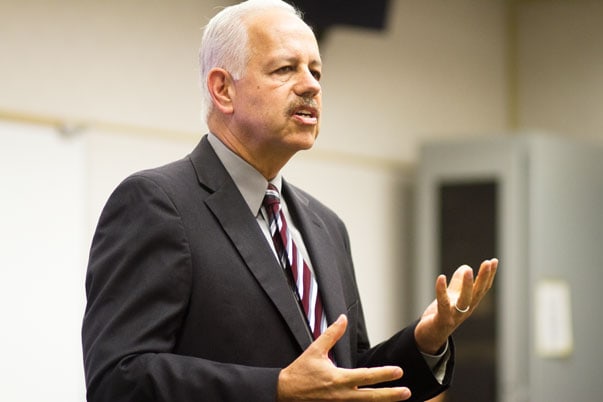 When a Voice of OC investigation revealed how a vice chancellor at the Rancho Santiago Community College District took thousands of dollars in gifts from district contractors, good government experts said the gift taking was excessive and showed that reform is needed.

But district Chancellor Raul Rodriguez disagrees. In fact, he has privately voiced approval of the practice, a position that contradicts some on the district’s Board of Trustees who support a gift ban or at least stricter rules on taking gifts.

At the center of the controversy is Peter Hardash, the vice chancellor of business services who oversees construction and other facilities related contracts. According to a Voice of OC tally, Hardash took nearly $3,500 in gifts between 2013 and 2014, mainly from district contractors.

The gifts were primarily in the form of golf outings. Hardash has received tournament tickets and free rounds of golf from at least 13 contractors doing business – or looking to do business – with the district.

District administrators refused to answer questions about the gift taking. But emails obtained by Voice of OC under the California Public Records Act provide a window into how Rodriguez feels about the issue.

“Peter is a golfer. He likes to golf,” Rodriguez wrote in an email to the district’s media consultant, George Urch. “If he can get someone to pay for his golf outing I don’t care as long as he reports it and uses vacation time when he goes.”

Good government experts – and even a high-level official at a neighboring college district – have lambasted such gift taking as attempts by contractors to curry favor with public officials as they decide on awarding taxpayer-funded contracts.

But Rodriguez in his email dismissed such theories regarding Hardash as little more than circumstantial evidence “that isn’t tied to anything real or substantial.” Part of his reasoning was the contracting decisions aren’t made by Hardash, but by employees working for Hardash, he wrote.

“Our system is set up so no single individual makes decisions or wields a majority of influence on the hiring decisions that we make with regards to contractors and vendors,” Rodriguez wrote.

But Rodriguez didn’t address the fact that Hardash only started disclosing gifts after he was fined by the Fair Political Practices Commission for not disclosing a gift, a strong indication that he previously hadn’t disclosed thousands of dollars more in gifts.

Rodriguez’s email was in response to Urch passing along questions from Voice of OC. Urch, who the district pays $5,000 a month for media advice, said the risk of not answering the questions was a one-sided article. But Rodriguez dismissed that concern.

Instead, he said in his email that the district should “ignore” the reporter because “if we don’t, he will keep probing until he gets something he can twist even further.”

“I would prefer that we save our breath and let [the reporter] do whatever he is going to do rather than feed his jaundiced viewpoint,” Rodriguez wrote.

And although Rodriguez at a Board of Trustees meeting suggested convening a board committee to make recommendations regarding the district’s travel and gift policies, he told Urch in an email that addressing the findings of the articles in detail was a bad idea.

“This is ridiculous!” Rodriguez wrote of trustee John Hanna’s plan to offer a public defense at last month’s board meeting. “Doesn’t Hanna see that getting into this level of detail only perpetuates the issue. You need to tell him to let it go.”

Hanna, who has expressed support for a gift ban, will be heading up the committee to address issues raised in the Voice of OC investigation.